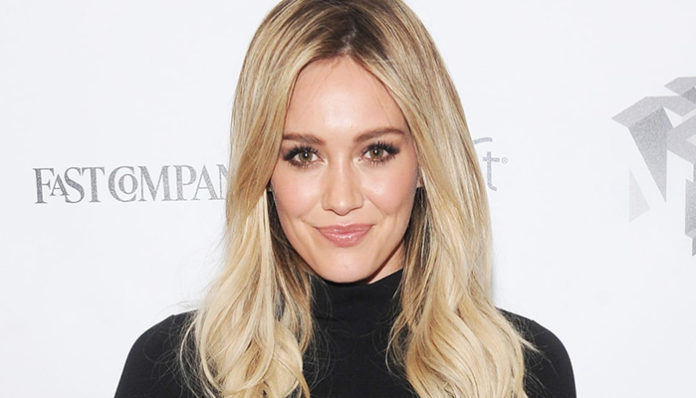 A former Disney star, Hilary Duff was one of the most popular teen idols of the 2000’s. Hailing from Houston, Texas, she grew fond of performing as a young girl, having enrolled in singing, acting and ballet. Curious about the show biz, she eventually appeared in a handful of TV commercials in the early 90’s.

In 1998, the blonde landed her first major acting role in the comedy film, Casper Meets Wendy. From there, she played a few minor parts here and there before being cast as the title character in the Disney sitcom, Lizzie McGuire (2001). The breakthrough that she’d been waiting for all along, the show quickly turned her into a household name.

How Hilary Duff Got Famous

Premiered in January 2001, the teen comedy centred around the life of Hilary’s character, Lizzie McGuire- a shy, thirteen year old who wants to fit in at school. A huge success as far as ratings go, it drew in an average of 2.3 million viewers per episode, most of which were preteens or teens. After a 65-episode run, Lizzie McGuire ended in February 2004; by then, the actress’ career had already kicked off.

In 2004, Hilary found herself co-starring in the romantic comedy, A Cinderella Story opposite of Chad Michael Murray. A modern adaptation of Cinderella, it proved to be a commercial hit at the theatres, having grossed over $70 million at the box office, despite its iffy reviews. If anything, the movie only further heighten her fame.

Following the end of Lizzie McGuire in 2004, the actress played a number of guest/supporting roles on television- including Olivia Burke in the popular teen drama, Gossip Girl (2009). Ultimately, it wasn’t until 2015 that she returned as a protagonist in the comedy drama, Younger on TV Land.

Hilary Duff as a Pop Singer

Aside from being a well-known actress, Hilary had also established herself as a singer in the early 2000’s. Today, she has sold over 15,000,000 records across the world

In 2002, she released her first studio album, Santa Claus Lane, a holiday themed project that eventually attained gold certification from the RIAA. From there, she received a breakthrough with the release of her second album, Metamorphosis. A chart topper on the Billboard Top 200, it effectively cemented her place as a world renowned, pop singer. Met with praise, it has since sold over 5 million copies worldwide. Her most successful music release to date, it eventually went platinum three times in the US.

Following her big break in the music front, Hilary released her third eponymous album, Hilary Duff in 2004. Wanting to take step away from her “Lizzie McGuire” image, the 17-track project was cited as being significantly more mature than her earlier works. Although its ratings were mediocre at best, it climbed up on the Billboard Top 200, later peaking at number two. Despite being inferior to her previous albums, it went on to sell close to 2 million copies in the US.

After a three-year long break, the blonde emerged from her music hiatus with the album, Dignity in 2007. Well received by fans and critics (unlike her previous endeavours), it made its way up to number three on the Billboard Top 200; ultimately, it reached the top 20 in five different countries. Still, its sales were much lower than what she was used to- perhaps a sign of her dwindling career in music.

In the summer of 2015, Hilary released her fifth and final album, Breath In. Breath Out. Her first full length project in eight years, it contained twelve songs including Sparks, Lies, Stay in Love, and Picture This. An impressive album, it ultimately reached number five on the Billboard Top 200, although it did not receive any certification from the RIAA.

At the peak of her career in the 2000’s, Hilary embarked on numerous tours across North America. Looking back, she was truly one of the most idolized teen stars in the United States.

Hilary Duff as an Author

In addition to being an actress and singer, Hilary is also the co-author of a young adult novel series. Known as The Elixir Trilogy, she had written the books with author, Elise Allen. Released in the fall of 2010, the first title of the series, Elixir has since nabbed a spot on the New York Times Best Seller list. The subsequent titles, Devoted and True were released in 2011 and 2013 respectively.

A philanthropist at heart, Hilary has involved herself with numerous causes over the years. For instance in 2005, she made a personal donation of $250,000, which went towards helping the victims of Hurricane Katrina.

Some of the other organizations that she’s worked with include Kids with a Cause, GLSEN, Ad Council, Save the Children, among a few others.

In 2010, the blonde married Mike Comrie, a former professional hockey player from Alberta, Canada. A year after tying the knot, she announced her pregnancy in 2011; her son, Luca Cruz Comrie was later born on March 20, 2012. As it happened however, the couple later divorced in 2014, although they would continue to co-parent Luca together.

Recently this July, she was spotted with her new boyfriend and, Ely Sandvik. In the past, Hilary has also been romantically linked with Joel Madden and Aaron Carter; their romances were often reported by the media in the early 2000’s.

Back in the late 2000’s, Hilary had her own line of clothing under the Femme for DKNY Jeans label. On top of that, she also had two lines of fragrances, With Love…Hilary Duff (made exclusively available at Macy’s), which was released in 2006 and another in 2008. 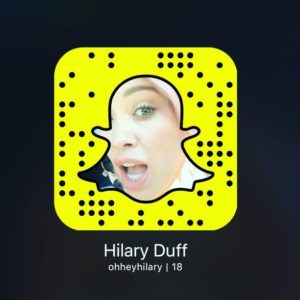 If you would like to add Hilary onto your Snapchat account you can do so by clicking here.

Want to stay connected with the former Disney star on Facebook? You can find her at her official fan page, @HilaryDuff, where she currently has over 8.6 million fans.

Like most celebrities, Hilary is also active on several other social media platforms- including Instagram. You can find her on the photo/video sharing app at @hilaryduff.

If you’d like to stay connected with the actress on Twitter, you can follow her at @HilaryDuff. As of July 2017, she has over 5 million followers on the microblogging platform.

Although she isn’t regularly active on Youtube, she does have a channel at @hilaryduffofficial, where she mainly shares the official music videos of her songs.