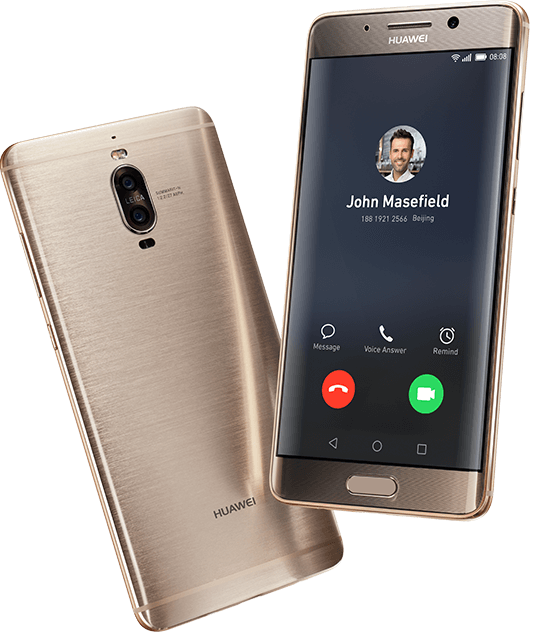 The Huawei Mate 9 Pro employs a dated and conventional design. Although the screen to body ratio isn’t bad, at 73.2%, it still doesn’t have the mesmerising edge-to-edge display that we’ve seen on phones like the Samsung Galaxy S8 and Xiaomi Mi Mix. It seems that I’ve said this on every phone review since, but it really is the future, and I hope all of the other phone manufacturers include bezelless displays on their phones within the next year. Being the biggest and best phone in the lineup, the Huawei Mate 9 Pro is impressively big.

The screen isn’t especially big, at just 5.5 inches, but the entire body of the phone is rather large and unwieldily. As a whole, the design closely resembles that of the Samsung Galaxy Note 7, which isn’t a bad thing, but it doesn’t stray far from the stock-standard recipe for phone designs, so it’s not that original.

On the front of the device is the curved display, which somewhat redeems it from the fact that it isn’t edge-to-edge. The earpiece, as well as the proximity sensor are at the front, as well as the 8MP front facing camera. At the bottom is the physical home button, which doubles as a home button. As with all physical home button equipped phones, it’s flanked by a recent apps button and the back button. It’s very, very, Samsung Galaxy Note 7-esque, down to the shape of the home button and curved display. Really, the only thing setting it apart is the camera on the back, and the Huawei logos.

Unlike the Huawei P10, the Huawei Mate 9 Pro doesn’t come with a huge selection of colors. You can choose between Haze Gold and Titanium Gray, and out of the two, I prefer the Titanium Gray. Overall, the design is pleasant and familiar, but it isn’t especially original or groundbreaking.

The Huawei P9 Pro has a large display. Though not quite as large as many Android phones today, it’s still relatively big. It’s the same size as the iPhone 7 Plus’s display. Thankfully, unlike the Huawei P10, it has a very high-resolution screen at 1440×2560, resulting in a high PPI of 534. The glass itself is Gorilla Glass 3, which should protect it from light scratching. Color representation is good, and viewing angles are pretty wide. It’s an AMOLED display, so some colors can be oversaturated, but the trade-off is that you get much higher contrast ratios, and the display can produce true black.

If you’re planning to keep the phone for an extended period of time, be weary that the AMOLED display may start to show artefacts, particularly in areas where the screen is kept on. This phenomenon is called LCD burn in or “image retention”, and it’s when a static image is “retained” on the screen, even when it shouldn’t be there. Notable areas where this often occurs is the time widget, and the status bar. Overall, the display is good, and it’s also detailed, at 534PPI.

Like the Huawei P10, one of it’s major selling points is the Leica camera. It’s a 20MP + 12MP telephoto camera, with a fixed 2x zoom. Even so, it has a low aperture of f/2.2, which means that low-light photos can be grainy. Low aperture is a common oversight on phone cameras, and it’s usually due to space constraints, but the Huawei Mate 9 Pro seems to have no lack of space. As is now standard with any phone, the Huawei Mate 9 Pro has a lightning fast fingerprint scanner built into the home button. Luckily it also functions as a normal home button, something that the Huawei P10 lacks.

The battery on the Mate 9 Pro is also much better than the battery on the P10. At a full 4000mAh, I’d expect the battery to last all day, and then some. We’ll see about that later. It’s ~700mAh more than the Huawei P10, but it also has a larger screen, so it could be about equal to the P10, which doesn’t have the most impressive battery life. Since the battery has such a high capacity, the Huawei Mate 9 Pro is equipped with Huawei’s own “SuperCharge” technology, which can allow the phone to charge from 0-50% in just 30 minutes, and 0-100% in just 90. That is blazing fast, and it’s good for times when you need to charge in a pinch.

Like the Huawei P10, the Huawei Mate 9 Pro uses the same unconventional home-grown SoC as the P10. Similar to the Exynos line, the Kirin 960 is designed by Huawei, and used only in Huawei products. I would have preferred Huawei to adopt the Snapdragon 821 and 835 chips, but it seems that they want to save costs on the chip. That’s not too welcome, since the Huawei Mate 9 Pro is far from cheap. It uses the exact same chip as the P10, the Kirin 960. As mentioned in the Huawei P10 review, the Kirin 960 isn’t an ultra powerful chip, and compares unfavourably to both the top Snapdragon and Exynos chips. This contrasts wildly to Samsung’s in-house chips, the Exynos line, which typically perform better than the Snapdragon chips.

However, the difference here between the Huawei P10 and Mate 9 Pro is the amount of RAM. While the P10 has a paltry 4GB of RAM, the Mate 9 has a more respectable 6GB of RAM. It’s still not as much as the OnePlus 5, at a colossal 8GB of RAM, but with software optimisation from Huawei, it shouldn’t make too much of a difference. Later on in the device’s lifespan, it may make a little more difference, but right now, it’s not noticeable at all between 6GB and 8GB of RAM. It performs a little better than the P10 in benchmarks, but it’s larger and denser screen mean that the GPU is pushed harder when playing 3d games. This is somewhat offset by the much larger amount of RAM, but it’d be nice to have a more powerful chip.

The Huawei Mate 9 Pro comes with the usual set of connectivity options for a flagship device, with WiFi, Bluetooth 4.2, GPS, GLONASS, Hotspot, and NFC. As with most Chinese phones, there’a dual SIM option, but it doesn’t double as a micro SD card slot, so there are no expandability options there.

In day to day use, the Mate 9 Pro is flawless in speed, when moving around apps, and between them. The experience is seamless, and there’s no stutters or hangs within the OS. This is typical of a flagship phone in it’s first year or so of duty, but after a few years, you’ll notice slowdowns. Still, there’s nothing to fault here, and it’s definitely more future-proof than the P10, but at such a high price, I would have expected a little extra.

Like the Huawei P10, the Mate 9 Pro has the dual Leica camera. It combines a 12-megapixel normal camera with a 20-megapixel monochrome camera, supposedly to increase dynamic range and low light performance. As well as that, it also has an inbuilt “wide aperture” mode, which works the same way (and produces roughly the same outcome) as the iPhone 7 Plus’s “portrait mode”. While it’s all well and good to have all these technologies packed into the camera, the actual raw quality of photo that it produces isn’t that good. Technically speaking, it’s not awfully detailed, and doesn’t actually perform as well as I’d hoped it would in low light. However, it’s a fun camera to use, and it comes with a few “Leica” software lenses which add a little grunge and vignetting to your photos.

Using “pro” mode, you can achieve some fairly good shots, and thanks to the dual camera, the contrast and dynamic range are excellent. It’s “wide aperture” mode also works well, but only when there is a set outline – it won’t work on, say a handrail reaching out to infinity. This is similar to the iPhone 7 Plus’s better named “portrait mode”, as it seems to work best with objects with clear outlines, like a person. Overall, the Camera on the Huawei Mate 9 Pro is an artistic and fun to use one, but it’s not as technically able as you’d hope it to be.

Like most smartphones, the Huawei Mate 9 Pro runs Android OS. On top of that is Huawei’s own Emotion OS, an iOS-like take on stock Android. While it’s popular in Asia, Emotion OS isn’t so similar to what we’re used to in the US. Gone is the app drawer, replaced by an iOS-like page set of all your apps. If you don’t like it, you can re-enable the app drawer in settings, but the overall look and feel stay the same. The skin also applies to Huawei’s own stock apps, which look similar to the design language they have used throughout the OS.

I personally don’t like Emotion OS as much as stock Android. Custom ROMS were needed before, but now Android has matured, and I’d like to see phone manufacturers stick to making the hardware, not the software. You cant return the Huawei Mate 9 Pro completely back to stock, but you can attempt to sideload as many Android stock apps as possible, and also by downloading Google Now Launcher.

The Huawei Mate 9 Pro features a large 4000mAh battery, but it also has a quad-HD display. This means that while the battery is large, the high-quality display might drain the battery quickly. However, in real life use, it fares very well. The Huawei Mate 9 Pro managed to stay alive for about a day under medium-heavy usage. I use my phone a fair bit, so a full day is impressive. If you’re a medium to light user, I wouldn’t be surprised if you managed to squeeze out a full two days of battery life.

All of the Huawei Mate 9 Pro configurations have the same Kirin 960 chip. Where it differs is the bands and dual SIM version. If you need the dual SIM, get it, but if you don’t need it don’t. Unlike the Huawei P10, the empty dual SIM slot (SIM2) doesn’t double as a micro SD card, so you’ll need to choose the storage amount you need at purchase. In addition, you can choose between the (RAM/ROM) 4GB/64GB or the 6GB/128GB. I’d recommend getting the 6GB/128GB version, even though it’s more expensive, as the extra 2GB of RAM will help massively in multitasking down the road. You also get the luxury of an extra 64GB of storage, which may come in handy, especially if you have a lot of movies and music.

The Huawei Mate 9 Pro is the fastest and best phone in Huawei’s lineup. It proves itself through it’s awesome AMOLED display and great battery life, but it falls short on performance. I’ll forgive it a little, since it’s an older phone, but the Kirin 960 simply isn’t powerful enough for a flagship phone. If you’re looking for a great looking phone, with decent performance and long battery life, this is the one. If you just want the fastest speeds with the most RAM, get the OnePlus 5.