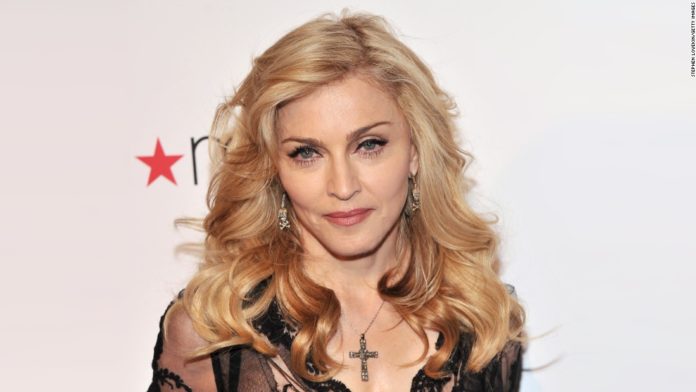 Madonna is without a doubt one of the most successful entertainers that this world has ever seen. She has found major success in everything from singing to songwriting to acting, and I think it’s safe to say that today Madonna is thought of as a pop cultural icon. Her mark on American pop culture, and on pop culture around the world, can’t be denied. This entertainer has an enormous following, and these fans are dedicated to appreciating her work. Madonna is known to occasionally use various social networking platforms, such as Instagram, Twitter, Snapchat, or Facebook, to connect with some of these fans. 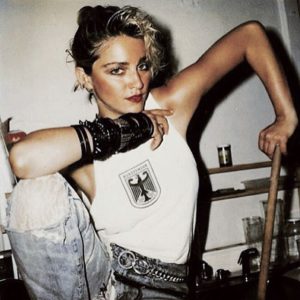 Madonna Ciccone was born in August of 1958 in Bay City, Michigan. Madonna struggled with a lot of complex feelings at a young age when her mother died, and she had an interesting upbringing because of that. She didn’t really act like any of the other girls, and although she was a fantastic student, her conduct left a lot to be desired by her peers and teachers. She would end up graduating from Rochester Adams High School, where she was a great student and a talented cheerleader. Because of both of those things, she was offered a scholarship to the University of Michigan School of Music, Theatre & Dance. Madonna attended the university for a while, but she decided to take a leap of faith in 1978 when she dropped out on a whim and moved to New York City, where she looked to further her dance career.

She first entered the music industry in 1979, when she performed as a backup dancer and singer for Patrick Hernandez, French disco artist. While she was doing this, she eventually become involved with Dan Gilroy, a musician. Madonna and Dan formed a band called the Breakfast Club, which gave Madonna her first taste of being a vocalist. During the early 1980’s, however, she decided to leave Breakfast Club and form a band called Emmy with Stephen Bray, a former boyfriend. Through this band, she started to attract a lot of attention in show business. 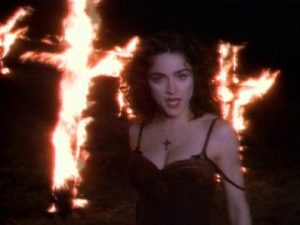 Fast forward to the 1990’s, and Madonna was one of the most popular musical artists in the entire world. In early 1989, she released the song “Like a Prayer”, which would go on to become one of the most popular songs that she had ever released. Aside from music, Madonna was also heavily involved in film too. In 1990 she starred in the film Dick Tracy alongside Warren Beatty. Madonna also started to get involved with business a little bit during this time. In 1992, she founded the entertainment company Maverick. This entertainment company consisted of a record company and a film production company. She established Maverick with the help of Time Warner, and her music proceedings from the deal were almost record breaking. Her first release with Maverick was the book Sex, which was highly controversial but made a lot of money.

During this time period, a lot of what Madonna did was controversial. Her work and her performances were seen as very sexually provocative, often to the point of being unnecessary. Although this meant that there was a little bit of negative attention swirling around Madonna, she was still the subject of attention to begin with. During the 1990’s, Madonna appeared in ten different movies, and she released three full-length albums. She embarked on two world tours. Needless to say, Madonna was able to crown herself the Queen of Pop during the 1990’s, and this is a title that some would argue that she still holds today. 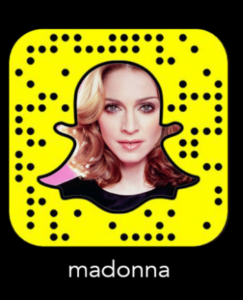 Madonna has an account on Snapchat, and you can follow her on Snapchat in a few different ways. Firstly, you can just add her by searching for her under her username, which is just madonna. One also has the option of scanning her Snapcode using the Snapchat app. I’ve included a picture of her Snapcode above. Finally, you can add Madonna on Snapchat just by clicking the link here.

I don’t think it’s really surprising that Madonna has a page on Facebook, considering the fact that Facebook is probably the largest social network in the entire world. You can find Madonna’s official, verified Facebook account by looking for her under the username @madonna. You can also check her page out by clicking the link here.

Another social network that Madonna makes use of is Twitter, which is another one of those really popular ones. She uses her Twitter account fairly frequently, and she has over 1.5 million followers on the platform. You can join the ranks of those followers if you have a Twitter account. You can find Madonna under @Madonna. Take a look at the kind of stuff she shares with her followers by clicking the link here.

Madonna uses her Instagram account a lot, and because of that, she has nearly 10 million followers on the platform. If you’re interested in following Madonna on Instagram, then I suggest that you look her up by searching for her under the username madonna. Alternatively, you can just click the link that I’ve provided here to check her account out.

Kik is a very popular messaging platform, so it’s understandable if you may believe that Madonna would have an account with them. However, as of this writing, there’s no evidence to suggest that. If Madonna has a Kik account, then she hasn’t shared it with the public.