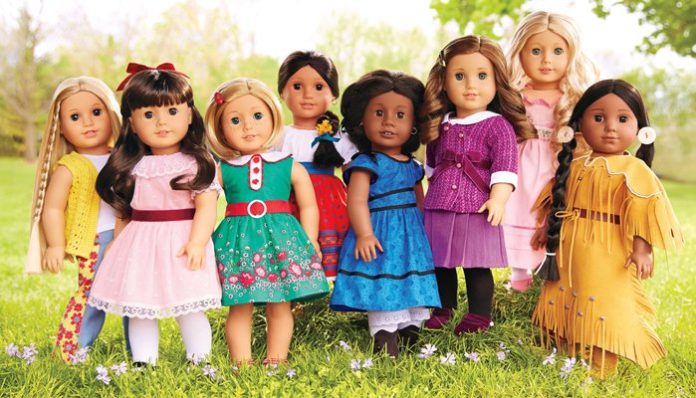 Who can forget the first time they saw an American Girl doll? Maybe your best friend got one for Christmas and let you brush its hair, or you read the books in your school library and knew all you wanted was an American Girl doll of your very own. This wasn’t just any doll, you told your parents, this was a doll with a personality, a life and family, and a part of your country’s history. This doll was pretty and perfect and educational and really, you’d just DIE if you didn’t get one.

Originally marketed in 1986 by the Pleasant Company, the American Girl line began with 3 girls and has since swelled its ranks to nearly 40 (though some dolls have been retired or archived), including full accessories, several book series and films. Originally intended to teach American history to young girls through a character-focused personal histories, the dolls’ popularity skyrocketed, spawning a line of contemporary girls, custom dolls, and a set of life-lesson guidebooks for preteen girls. The refined boutique-style display boxes and stands made the original American Girl dolls instant collector items.

It’s not just the early dolls topping the auctions at eBay either. More recent Girl of the Year dolls is selling for top dollar due to their limited availability. Do you have a valuable American Girl doll collecting dust in the closet? Don’t go running for the attic yet, we’re going to take a look at the top 10 most expensive and valuable American Girl dolls out there. 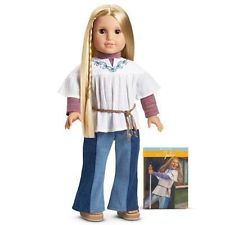 Julie Albright—who represents the 1970s—debuted in 2007 with a long sleeved turtleneck and bell-bottom jeans. She came with blonde hair, which featured a thin braid on the right side, and dark brown eyes. She also wore a braided leather belt that was knotted at the ends.

In 2014, a BeForever version was released. Unlike the original Julie, she wore a white tank top with a yellow vest. Her hair and eyes renamed the same. For a few years, she was available by herself for $36. By 2019, she was retired as a separate purchase doll.

Fans who would like to add the original Julie (in mint condition) to their collection can expect to pay around $140 to $230 at an online auction.

The Rebecca Rubin doll was released in the summer of 2009. She had light brown hair, hazel eyes, and wore a red tweep waist dress with belt loops. According to American Girls, her outfit is meant to imitate the conservative fashion of the mid 1910s.

A new, updated version was later released during the rebranding of the Historical Line in the fall of 2014. Instead of a red dress, the BeForever version wore a purple asymmetrical jacket with a knee length skirt. At one point, the new version was available separately for $36, however, it is now only available as a bundle.

For those who are interested in the retired version, it can sometimes be found online with prices ranging from $150 and $260. 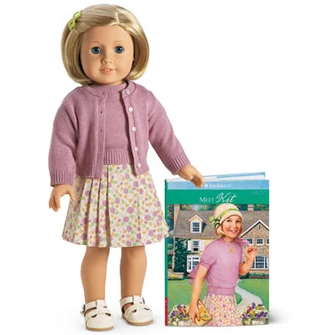 The original Kit Kittredge doll came out in 2000. She had blonde hair and blue eyes and wore a lavender knit sweater, matching cardigan, and a floral print pleated skirt. She also wore white bloomers, ivory-colorer sandals, and a jade green barrette.

In 2014, an updated version was released as part of the BeForever collection. Unlike the original, the new doll wore a teal sleeveless dress and red Mary Jane shoes. She also wore a red plastic hair barrette on the side of her head. Her other accessories included a crocheted hat, purse, necklace, and handkerchief.

In terms of price, a first edition Kit can go anywhere from $150 to $325 online, depending on the condition.

The Kaya’aton’my (‘Kaya’ for short) doll came out in 2002. The ‘oldest’ American Girl doll, she was a member of the New Perce tribe, who lived throughout the Northwest United States.

She wears a traditional deerskin dress with a brown leather belt, the latter of which is tied at the front. As for her hair, its long and straight and done up in two braids, with two shells on each side. The first version included a porcupine quill necklace, belt pouch, and woven rectangular bag.

A new BeForever version of the doll has since been released, however, there are no major updates to her outfit or accessories. The only difference is that she now comes with a copy of The Journey Begins. 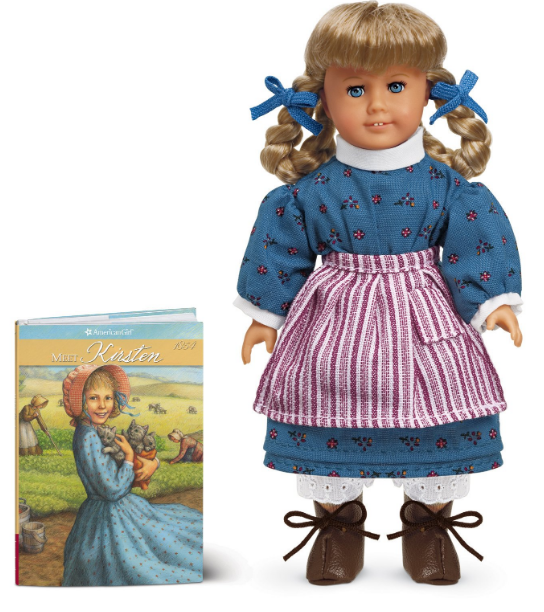 The Kirsten Larson doll was one of American Girls’ first Historical Characters. Released in 1986, she wore a mid-century day dress and a cotton apron, the latter of which featured red stripes and dashed lines. And like most American dolls, she wore white cotton pantalettes, knee-high stockings, and boots. Her accessories included a red sunbonnet, spoon bag, necklace, and handkerchief.

After many years, she was officially retired in January 2010. A new version, which was available as a limited edition bundle, was later released in 2021 for American Girls’ 35th anniversary.

The bundle included the doll, her accessories, a first edition style of Meet Kirsten, as well as an older-style box. In terms of appearance, the updated version wore a slightly darker dress and an apron with a slightly lighter weave. Her eyes were also a darker color; instead of light blue, like the original, they were dark blue. The bundle was available for $150 and by August 2021, it was sold out.

Cecile Rey was released alongside Marie-Grace Gardner as a pair in 2011. She represented mid-nineteenth-century New Orleans and was one of a handful of dolls of color that were part of the historical line.

She had dark brown hair with red highlights, which were partially held up on the sides by two silk ribbons. She wore a teal calf-length dress, one with a black velvet ribbon trim with white cotton pantalettes, and black ankle boots. Her accessories included a dark teal round hat, a bronze metal necklace, and white wrist gloves. 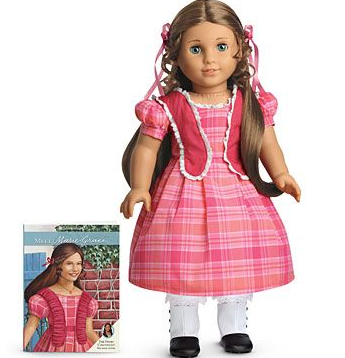 Marie-Grace Gardner was originally released in 2011 with Cecile Rey as her best friend. She had aquamarine eyes and light brown hair, which she wore in two crisscrossed braids.

Under her pink plaid dress, she wore white pantalettes, which had eyelet lace at the hem. She also wore black button boots with Velcros at the back. Her accessories included a hat, a fan, and a gold heart-shaped locket, which she wore on a gold chain.

She was available for three years and was retired in 2014.

The original Josefina Montoya doll was released in 1994. She represented the New Mexico area and was the sixth of the Historical Characters. She had dark brown eyes and wore a braid that draped against her shoulder. In terms of her outfit, she wore a long blouse with a simple skirt, which reflected what fashion would have been like in the 1800s in Mexico.

In 2014, American Girl released an updated version of Josefina for the BeForever collection. Instead of a maroon skirt, she wore a bright red skirt with a blue flower print. Her belt was also a different color (royal blue instead of brown).

And in 2021, they released a special edition for American Girl’s 35th anniversary. Available as a bundle, it included the doll, accessories, as well as an older-style box with a visibility window. The bundle quickly sold out and was retired by July 2021.

As for the original Josefina doll, it occasionally pops up at online auctions for around $300. 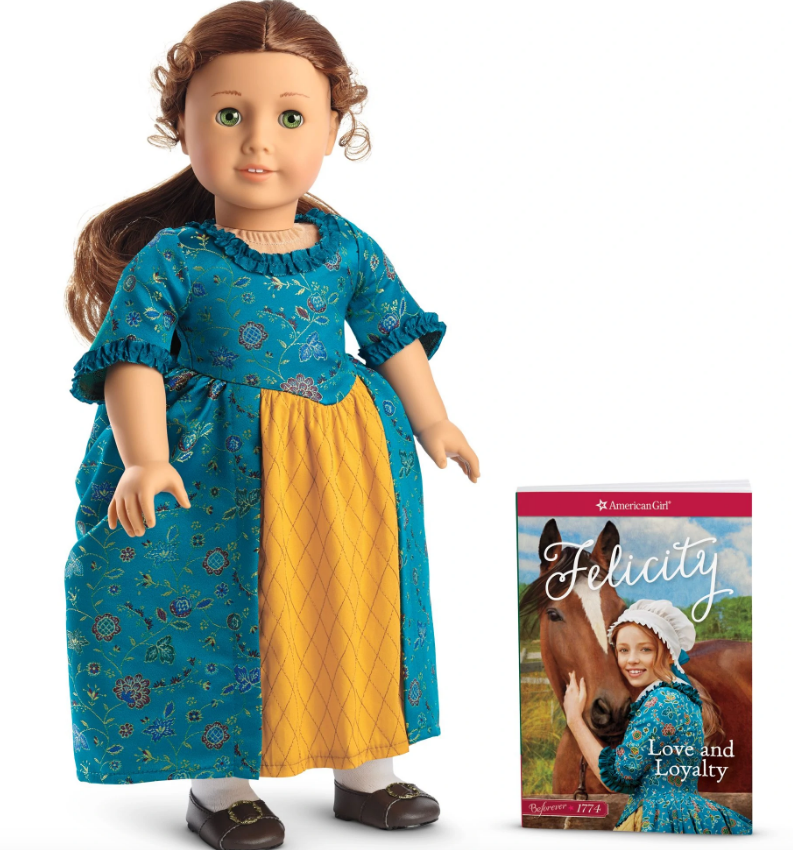 The original Felicity was released in 1991. She was the first doll to be added to the collection after the original three. In 2002, however, she was removed from the catalog. Collectors were only able to get her, her clothes, and her furniture through online order. By 2011, she was officially archived.

Many collectors were against this decision and so American Girl brought her back with a new look in 2017 for the BeForever collection (she had a blue and yellow outfit instead of a pink/purple dress). Ironically enough, it’s also the rarest version as it was only available for two years. It was later retired in 2019.

For those who are interested in adding the original Felicity to their collection, you can expect to spend at least $350.

Number one on our list isn’t a retired historical figure—but an original Girl of Today doll! Originally released in 1995, she had long, black hair with bangs and dark brown eyes. Unlike many of the other “Girl of Today” dolls, she was only available in stores for two years.

It wasn’t due to a limited release, however. Rather, it was because she was unpopular. That’s right, she wasn’t sought after like the other dolls. Why? Many collectors thought she looked too similar to the other original “Girl of Today” dolls.

By 1997, they had revamped her appearance. Instead of black hair and brown eyes, she had blonde hair and green eyes.

How much is the original doll worth? It’s hard to say. They’re so rare, that they almost never come up on eBay and other sites. The blonde version, however, has come up a few times. In fact, one was recently sold for $65.