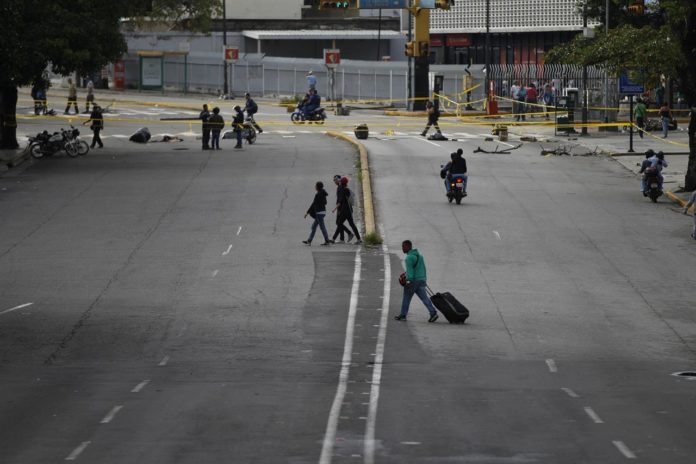 The 48-hour strike announced by opposition leaders a few days ago began on Wednesday. The nationwide strike comes less than a week after a 24-hour strike left streets across the country completely empty. The strike also comes just four days before the government holds elections for the constituent assembly.

The strike comes after months of protests, which have left nearly 100 people dead and hundreds more injured. The elections are scheduled for Sunday and government supporters will vote to choose the members of the assembly. The constituent assembly elections have been heavily criticized by the opposition and world leaders. World leaders have asked for the elections to be canceled but the government has repeatedly said it will continue its plans. A few days ago, US President Donald Trump warned the Venezuelan government that if the elections take place, there will be economic sanctions. The president did not reveal in the statement what the sanctions could be but it’s speculated that it could be against the oil sector.

The protests have continued since the announcement of the elections and experts believe the situation could get worse in the next few weeks. More than 90 people have lost their lives in the protests and hundreds more have also been detained. Last week, a referendum by the opposition received more than seven million votes. On Tuesday, opposition leader Leopoldo Lopez called on Venezuelans to continue the protests.

The constituent assembly has been heavily criticized by the opposition and world leaders as they think this is another move to try to keep Maduro in power and not hold elections ever again. The government has scheduled regional elections, which were supposed to take place in late 2016, for December. But the opposition is not convinced about the announcement since they think the constituent assembly will look to stop any elections in the future.

The 48-hour strike is the second strike in less than a week. The first strike shut down many parts of Venezuela and left at least 5 people dead. Pictures on social media showed streets empty and businesses closed in many cities. In recent days, thousands of Venezuelans have crossed into Colombia to start a new life. Many of them fear that the situation could get worse as the elections get closer.