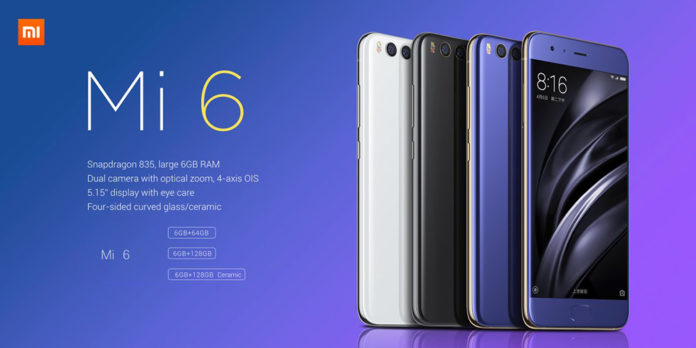 Xiaomi is no stranger to phones. They’ve been designing and making phones for a long time, and they’re well known for their low prices and good quality. The Xiaomi Mi 6 is the sixth phone of their excellent Mi line. At $429.99 for the 6GB/64GB (RAM/ROM) version, it’s a very affordable phone. Although it’s priced modestly, it has all the features and specifications you’d expect from a flagship phone. I’m a fan of most of Xiaomis products, as they offer great value, while not sacrificing quality, and I’m hoping the Mi 6 will uphold that reputation. Let’s see in this review.

The Xiaomi Mi 6 employs a relatively conventional design, unlike the wacky new ideas present in the Xiaomi Mi Mix. It lacks an edge to edge display or even a curved display. Instead, it focuses on what’s inside of the phone, such as the Snapdragon 835 providing the power. Even so, the Xiaomi Mi 6 is made of premium materials and looks great. The front is covered in edge-to-edge glass, with two capacitive buttons flanking a physical home button. Although many phones are adopting to Google’s style of having no buttons and relying solely on the software buttons, I find the click of the home button to be reassuring. In addition, I find that having physical buttons clears up more screen real estate for what you want on the screen – your apps.

Like all Xiaomi and most Android phones, the left side is left blank, with the right side housing all of its buttons. Sadly, with this phone, Xiaomi has decided to take out the headphone jack. Xiaomi kept it on the Xiaomi Mi Mix, and the Xiaomi Note 2, but the Xiaomi Mi 6 lacks it. This follows the lead of many other phones, notably the iPhone 7 and 7 Plus. While this isn’t a huge deal, it’s a shame to see a such often used port disappear. Overall, the Xiaomi MI 6 is a great looking phone, and it feels every bit a flagship.

The Xiaomi Mi 6 is a flagship phone, and it has a great looking screen. Although it’s lower resolution than a lot of Android flagships, it still looks good. Viewing angles are wide, and colours are vibrant and accurate. One standout feature of the display is just how dark it can go. It can get scarily dark, at just 1 nit(!) – so dark that you can have trouble finding the brightness slider to turn it back up again. It’s also decently bright, in fact, brighter than the iPhone 6s, at 600 nits. The display is a moderate size, at 5.15 inches. In a world where we have 6.4-inch displays on the Xiaomi Mi Mix, this isn’t outstandingly big anymore. Even so, it’s a solid display, bright, clear, vibrant, and responsive.

As with almost any flagship Android smartphone, the Xiaomi Mi 6 has a lightning-fast fingerprint scanner. Since it has a larger battery, it also has Quick Charge 3.0 technology, to enable it to charge quickly with a particular power brick. Other than those two things, the Xiaomi Mi 6 is a barebones power device. In order to keep the price down, and the performance up, Xiaomi has opted to keep special features to a minimum. That’s a good choice, as I’d rather have top notch performance rather than special features.

This is where the Xiaomi Mi 6 shines brightest. It has a powerful Snapdragon 835 processor paired with an impressive 6GB of RAM. Inside of the Snapdragon 835 is an octa-core processor (4×2.45 GHz Kryo & 4×1.9 GHz Kryo), and the Adreno 540 GPU. Both of these should keep the phone operating at peak for a few years to come, with slowdowns coming after a few years. Powering all of the powerful internals is a non-removable LiPo 3350mAh battery, equipped with Quick Charge 3.0 Technology. Compared to the Samsung Galaxy S8’s 3000mAh, it’s a notable improvement. In addition, the Samsung Galaxy S8 has a much larger, brighter, and higher resolution screen, and therefore battery sucking screen, so the Xiaomi Mi 6 should have much better battery life than the Samsung Galaxy S8.

The Xiaomi Mi 6 is charged through USB-Type C (1.0), which is a standard feature in todays Android devices. USB Type C is a good addition, as it’s reversible, and looks neater than Micro USB. Like many Chinese phones, the Xiaomi Mi 6 supports a dual SIM setup. This is especially useful for those who only want to use one phone for home/work, or if you prefer to have different plans. As is standard with all Android flagships, the Xiaomi Mi 6 has WiFi, Bluetooth, GPS, GLONASS, and NFC.

The Xiaomi Mi 6 is an absolute beast of a phone. It has the latest and greatest Snapdragon 835 processor, and a generous 6GB of RAM. That’s more than enough to ensure blazing fast performance on Android, even with Xiaomi’s ROM on top. In real use, it’s absolutely flawless, and it performs tasks quickly and smoothly. There’s next to no hiccups or hangs on the Android (7.1.1) operating system, and it can run any 3D game you can throw at it, thanks to it’s impressive Adreno 540 GPU. A few years down the road, you may find the speeds less dissimilar to midrange phones, but for now, it’s one of the fastest phones on the market. Of course, it’s shadowed by the OnePlus 5, but the OnePlus 5 has only just been announced and is beginning to ship now. Overall, it’s a ridiculously fast phone, and there’s no lag anywhere in the UI.

The Xiaomi Mi 6, like the OnePlus 5 and iPhone 7 Plus, has a dual camera setup. It’s also used in the same way, to provide both a 2x optical zoom, and to achieve a DSLR-like bokeh effect. It works relatively well, but it isn’t as natural looking as photos taken on the iPhone 7 Plus. Image quality is good on the Xiaomi Mi 6, but things can be a little oversaturated. The bokeh effect is also a little overdone. Overall, the photos taken with the Xiaomi Mi 6 are on par with most other Android flagship smartphones, but it’s nothing special, aside from the bokeh effect, which has been done before by OnePlus and Apple.

The sensors themselves are:

Like all Xiaomi devices, the Xiaomi Mi 6 runs MIUI on top of Android. MIUI isn’t for everybody, and it’s specifically designed for Chinese users. That means that it takes a very similar approach as iOS, with no app drawer, and highly customised UI features, like the settings app. Almost nothing is left untouched, most things have been changed from stock Android. If you’re not a fan of MIUI, you can install Google Now Launcher, which comes as usual with an app drawer. Even after that, you’ll still have all of Xiaomis custom apps, like the clock, calendar, etc. This means you won’t be able to get stock Android on the Xiaomi Mi 6. Overall, MIUI is good for those who are coming from an iPhone, but for the standard Android user, you’ll want to download Google Now launcher to bring it closer to stock.

The Xiaomi Mi 6 packs an impressive 3350mAh battery into the relatively small phone. Though it’s not as big as the 4400mAh power pack found on the Xiaomi Mi Mix, it’s still substantial. Pair this with a low-res screen, and aggressive optimisation, and you get very good battery life. The Xiaomi Mi 6 can last for up to two days, and if you’re a heavy user, it’ll last you a full day. That’s no mean feat, as, by “heavy user”, I mean it. Overall, the battery life is above average, and the low res screen more than helps the battery life to be so long.

The Xiaomi Mi 6 is a powerful, fast, sleek phone, though it’s a little stale and boring. It doesn’t adopt the new trend of bezel-less displays, but it makes up for that with its low price and powerful performance. It isn’t the phone of the future, and it doesn’t look like it either. If you want the best of the best, and you want all the bells and whistles, look elsewhere. However, if you just want raw power at the lowest price, and don’t care too much for a huge screen, you’ve found the perfect phone.