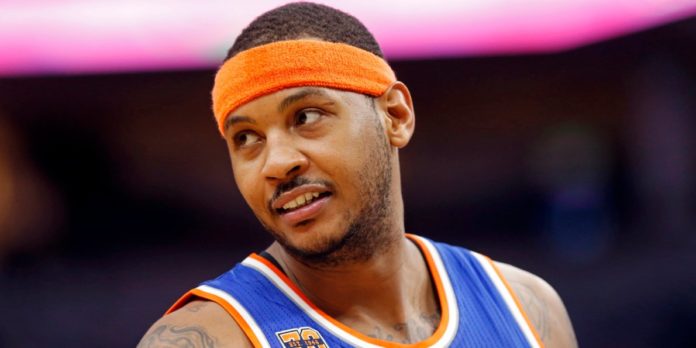 Even when he was just playing basketball at the collegiate level, Carmelo Anthony was turning heads. He has always been seen as a superstar, and that hasn’t changed through his professional play with both the Denver Nuggets and the New York Knicks. Anthony is one of the most popular and well-regarded players in the NBA right now, which obviously means that he has quite a lot of fans. His fans are known to support him both on the court and on social media. They use platforms like Instagram, Twitter, Facebook, and Snapchat to show their love for him. Sometimes, Carmelo is known to interact with these fans on social media. 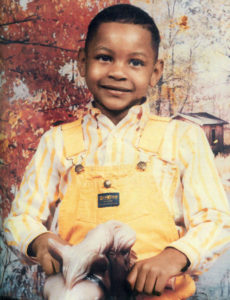 Carmelo Anthony was born in Brooklyn, New York in May of 1984. Although he was originally born in New York, Anthony was mostly brought up in Baltimore. He didn’t live in the best part of town, and so the boy frequently used sports as a way to keep him from participating in street crime. He went to high school at Towson Catholic High School, and he saw that his athletic stock went up drastically during the summer of 1999, when he grew five inches. Partially due to his imposing height, he was able to quickly become one of the most dominant high school basketball players in the area.

Although Carmelo Anthony was undoubtedly talented at this stage of his development, he wasn’t really being scouted by the NBA due to his lack of strength. He was tall, but he was also very lanky. Anthony apparently wasn’t interested in being scouted directly out of high school, though. During his senior year, he announced his intention to attend Syracuse University prior to transferring to Oak Hill Academy. He would officially close out his high school career with Oak Hill, and he did so with flair. By the time he was done with high school, no one could deny that this kid was on to big things. 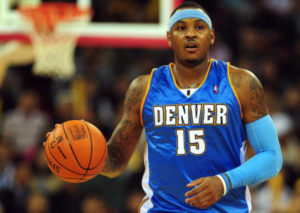 Carmelo Anthony only ended up playing for a single season with Syracuse University, but that single season was a staggering one. Under Anthony’s leadership, Syracuse was able to obtain their first ever NCAA tournament title of all time. Carmelo ended up being the tournament’s Most Outstanding Player. (Not to discount the accomplishments of the rest of his team, but Anthony really did end up carrying the team through a lot of the tournament.) Since he had already accomplished his goal of winning a title during his freshman year, Carmelo Anthony decided to drop out of Syracuse and declare himself eligible for the NBA Draft. Anthony was initially drafted by the Denver Nuggets in the 2003 NBA Draft, with the third overall pick.

Pretty much as soon as he came aboard the Denver Nuggets, his impact was noticeable. Between 2004 and 2010, Anthony helped pull the Denver Nuggets to the playoffs. Every single season. That’s not something to sneeze at. During that time span, the Nuggets won two division titles. In 2011, however, he was traded away from Denver to the New York Knicks. This was a trade that surprised a lot of people. He continued his dominant performance in New York for a time, helping bring them to the playoffs in 2011, 2012, and 2013. Carmelo Anthony has also been a real force on the United States Olympic Basketball Team for the last several years. Love him or hate him, I don’t think you can deny that this small forward has left his fingerprints all over the NBA, and basketball, as a whole. 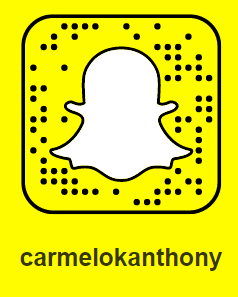 Carmelo Anthony, like a lot of other athletes, has an account on Snapchat. You can find him on Snapchat under the username carmelokanthony. If you want to add the basketball superstar on this social platform, then there are a few ways you can do that. First of all, you should consider just scanning his Snapcode. For your convenience, I’ve gone ahead and attached an image of Carmelo Anthony’s Snapcode above for your convenience. You can also add him on Snapchat just by clicking the direct link right here.

Carmelo Anthony has a verified, official Facebook page. The page is pretty popular and is used regularly by Carmelo. It has nearly 5.5 million likes right now. If you haven’t already seen his Facebook page, you can find it by searching @CarmeloAnthony. You can also navigate directly to the page by clicking the link here.

Carmelo Anthony is one of the biggest basketball stars in the world, so I guess it isn’t surprising that he has nearly 9 million followers on Twitter. His Twitter username is simply @carmeloanthony. You’re free to take a look at what kind of stuff he shares with his followers by clicking the link here.

Instagram isn’t typically as popular among athletes as Twitter is, but rest assured! Carmelo Anthony (and his fans) still have a large presence on Instagram. Carmelo has over 5 million followers on Instagram, and you’re free to join them if you haven’t already. Carmelo Anthony’s Instagram username is just carmeloanthony, and you can check out his account by clicking the link right here.