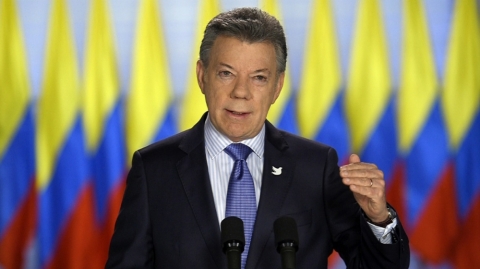 Colombia’s President, Juan Manuel Santos, has spoken again about the controversial constituent assembly in Venezuela. Santos, who has heavily criticized the plans in recent weeks, mentioned that a break in diplomatic relations with Venezuela might happen.

Santos has been one of the biggest critics of Venezuela’s constituent assembly, which began on Friday. The president mentioned hours before the elections took place that Colombia would not recognize the results. The elections happened one week ago and have been involved in controversy since the results were announced. The opposition says less than three million people voted while CNE announced that nearly nine million people voted in the elections. The results led to the opposition calling fraud and the company behind the voting machines recently said that the vote total may have been inflated by at least one million.

It is the second time that Santos speaks about the constituent assembly since the elections. The comments by the president came during an interview with the Caracol channel. Santos also said during the interview that these type of decisions should be made together with the other presidents in the region.

Santos also mentioned that this decision would bring more problems than benefits. The two presidents have criticized each other in the past. Santos also revealed that he had not spoken to Maduro since March.