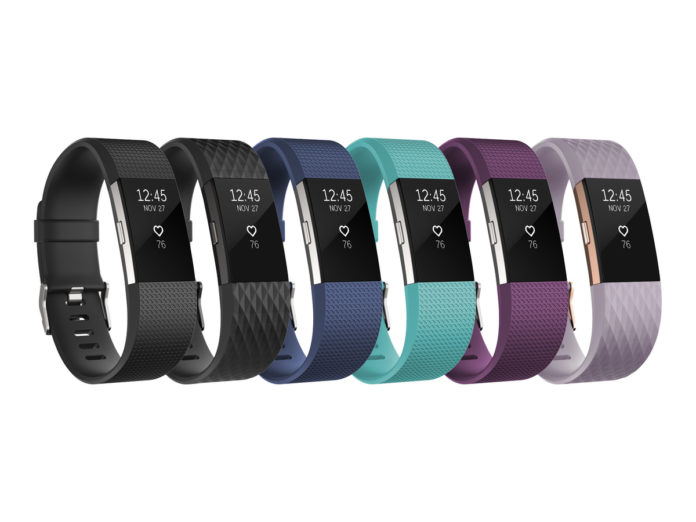 The Fitbit Charge series has always been the quintessential premium Fitbit. With an integrated screen and a band similar to that of the smaller fitbit Charge 2 combines comfort with versatility. It’s not cheap, at $149.95, but it’s cheaper than a lot of smartwatches out there, and it does a whole lot more in terms of tracking. Fitbit has always been known for their superior tracking technology and accuracy, and the Fitbit charge continues that legacy. Available in a multitude of different colors, the Fitbit Charge 2 is an attractive device, with a small footprint and a bright OLED display. The Fitbit Charge 2, along with the Fitbit Alta HR, Fitbit Blaze, and Fitbit Surge are also the only wearable devices available from Fitbit that can track your heart rate. With that in mind, the $149.95 price tag doesn’t seem so exorbitantly expensive, especially considering the Fitbit Blaze is $199.95.

At first glance, the Fitbit Charge 2 looks like a slimmed-down version of the Fitbit Surge. The Fitbit Surge wasn’t a great looking device, so luckily the slimmer Fitbit Charge 2 looks a whole lot better than the Surge does. This is mostly thanks to it’s slimmed down design, but it’s also due to the fact that the screen-to-body ratio is a lot better on the Charge 2. Unlike the Alta and Blaze, the glass on the display isn’t bevelled at all, and leaves the front of the device completely flat, aside from the slight curve that curves with your wrist. It’s essentially the same design as the Fitbit Surge – it even keeps the same band material. The most obvious difference is the wideness and the fact that the display is a colour OLED display, instead of monochrome display.

On the side of the device is a power button, but you shouldn’t really need to use it – the Fitbit Charge 2 comes with a tap display, so as soon as you tap the display, it turns on. The design of the Fitbit Charge 2 is very similar to all other Fitbit devices, and follows the same design philosophies and general use cases. It blends right into the Fitbit line, and that’s great – Fitbit is sticking to what it knows best.

In addition, it can pair with your phone for connected GPS, which shows you your pace and distance on the screen while running. Connected GPS is great if you’re okay with carrying your phone with you, but in my opinion, the reason I buy a tracker is that so that when I run I don’t have to have a phone dangling in my pocket. Connected GPS is still okay if you just want to see GPS info on your wrist, but it’s not quite the same as the real GPS we once saw in the Fitbit Surge.

Thanks to Fitbit’s closed garden approach to the Operating System, there aren’t any third party apps or watch-faces available. That means you’re stuck with the apps and watch-faces that come with the device, which aren’t plentiful. It seems rather odd that Fitbit puts so much emphasis on customisation for it’s products, and yet fails to deliver a way in which users can upload and change their watch-faces, like Android Wear. However, perhaps more importantly, it means that you can only sync the Fitbit Charge 2 to the corresponding app on your iOS or Android device, the Fitbit app. Although it sucks to only have one option, it’s a very good app, and I don’t think there’s a better tracking/syncing app around. What you lose in customisation and freedom you get back two-fold in quality.

The Fitbit app is great, and receives regular updates, unlike some tracker manufacturers, which completely abandon their app after a certain period of time. It also looks great, and it’s tracking features are second-to-none. One of the only features it’s missing is Apple Health support, which would make it compatible with a multitude of other apps as well. Instead, Fitbit likes to keep things in-house, with other apps connecting to Fitbit directly. Luckily, the Fitbit app does a lot of things that other third party apps do as well, like meal and calorie tracking. Overall, syncing and tracking is flawless with the Fitbit app and the Fitbit Charge 2.

The Fitbit Charge 2 comes with exceptional battery life – in fact, up to 5 days of battery life. This is an optimistic estimate, but it’s generally accurate. Usually, you’ll get around 3-5 days of battery life, but any more than 2-3 is perfectly acceptable for me. Since the battery in the Fitbit Charge 2 is extremely small, charging times are very very low, even without any fast charging capabilities. I found that just charging it while having a shower kept it topped up indefinitely, though bear in mind I spend ungodly amounts of time in the shower for a male. With the Fitbit Surge, I credited the ugly monochrome display as being the reason for the exceptional battery life, but the Fitbit Charge has a large, bright OLED display.

It’s quite an amazing feat that Fitbit has been able to squeeze a full 5 days of battery life into the tiny Fitbit Charge 2, but I think the walled-garden approach to the OS has enabled Fitbit to take optimisation to the extremes, and ensure battery life is the best it could possibly be. However, when it does come to charging, it can be a tad fiddly, as you need to connect it to a little charging cradle, instead of plugging it in or resting it on a stand. It’s a small thing, but it still makes the experience just a little less painless than it should be.

The Fitbit Flex 2, Fitbit’s cheapest wrist-tracker, is “swim proof”, and many smartwatches from the Apple Watch Series 2 to the Sony Smartwatch 3 have some sort of waterproofing, in the form of “Water Resistance”. The Fitbit Charge 2 unfortunately forgoes any sort of waterproofing, so if you’re planning on running in heavy rain protect it under your sleeve. Sadly, this means that tracking swimming is completely out of the question. It’s a shame that they’ve had to omit waterproofing from the tracker, since it seems almost standard issue that wearable devices have at least an IP67 rating. Unfortunately, there’s none at all for the Fitbit Charge 2.

Like the Fitbit Surge and Blaze, the Fitbit Charge 2 aims to at least somewhat replace mainstream smartwatches for a place on your wrist. Hardcore smartwatch fanatics will look on with dismay, but the Fitbit Charge 2 has some limited capability as a smartwatch. It doesn’t have any apps at all, so you won’t be able to accidentally order a XBOX One from the Apple Watch Amazon app, but it does give you a buzz on incoming texts, calls, and calendar alerts. The screen on the Charge 2, though bigger than previous devices, is still very small compared to normal smartwatches, so these alerts seem cramped compared to the alerts found on the larger versions of Fitbit products, or on normal smartwatches.

Fitbit has always prided itself on it’s wide variety of different options for customisation, and the Fitbit Charge 2 is no exception. If you go on the Fitbit website, on the “lookbook”, you’ll find that there are three families of different bands for the Fitbit Charge 2 – the Classic, Sport, and Leather bands. The classic and sport bands are made of the same material, except the sport has extra holes for breathability. The leather band is, unsurprisingly, made out of leather, and it’s a good looking and comfortable band. However, it’s also the most expensive band you can buy for the Fitbit Charge 2, at $69.95. That band alone is $10 more than the Fitbit Flex 2, the cheapest wrist-worn tracker Fitbit sells.

Unfortunately, due to Fitbit’s approach to the Operating System and ecosystem, there aren’t any 3rd party customisation options for the Fitbit Charge 2. However, Fitbit does let you choose from a few built-in watch-faces, though it’d be nice if we were able to choose ones made from 3rd party developers, or at least have more options to choose from.

I’ve tried a few Fitbit devices now, and they’re all very comfortable. The Fitbit Charge 2 is definitely more comfortable than the Fitbit Surge and Blaze, thanks to it’s smaller size, but it’s not quite as comfortable as the Flex 2 and Alta. However, unlike the even smaller Fitbit devices, it doesn’t seem to run up and down my wrist as much. With the default silicone band, it grips very tightly, and although it’s not the most comfortable, it never feels like it will come loose or fall off.

The Fitbit Charge 2 isn’t the best value for money on the market. This is true of all Fitbit products – they’re a large company, so they charge more for their devices. However, the app support and resources are simply the best you can get, and I think that the price is justified, not just for the device itself, but also for the app support and online resources they provide. It’s simply astounding how good their app is, and although it doesn’t plug into Apple Health, it’s a very polished app, and well worth the investment into the hardware.

The Fitbit Charge 2 leans more towards the “fitness tracker” side of things, forgoing a few important smartwatch features. However it’s tracking is second-to-none, and it’s app support is stellar too. It isn’t great at showing you all your notifications (it can’t), but it does a decent job of notifying you of texts, calls, and calendar alerts. Thanks to it’s smaller screen and refined operating system, it has extremely long battery life, which is great, since we’re getting to a point with technology where everything has to be recharged every day. Overall, it’s a great product, which is just missing waterproofing and a few more smartwatch features which could make it really shine.