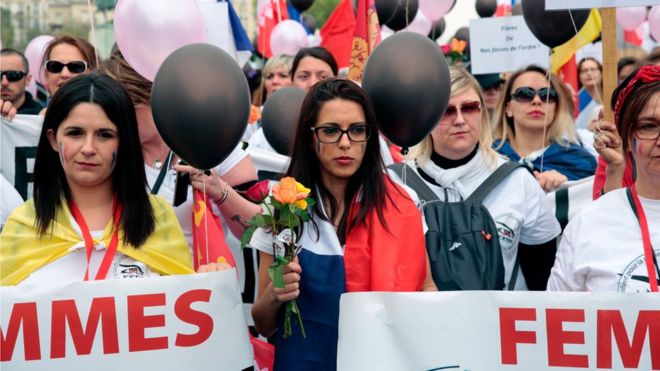 Hundreds of women unhappy about the working conditions in the army have protested to defend their husbands. The women, who are married to French soldiers, are complaining about the conditions that their husbands have been living in for the last few years.

Two years ago, the French government deployed thousands of soldiers to guard the most visited places and big events such as concerts. According to Mercedes Crepin, one of the organizers of the protest, the soldiers are living in hangars that are infested with cockroaches.

The protest, which was organized by the Angry Soldiers Wives group, comes just months after the Angry Police Wives group also protested. The group has more than 5,000 members and many were expected to join the protest in Paris.

The women are not only unhappy with the working conditions but also the little treatment the soldiers receive and the recent mistakes that have left some of them in debt.

One of the biggest concerns is the lack of support for the families of the soldiers who have served in Afghanistan and suffer from PTSD. Mrs. Crepin, who helped organize the protest, is one of many who are concerned about the lack of support because her husband has PTSD.

Mrs. Crepin also spoke about other problems that are happening to army wives. She says some are told to leave military housing two or three months after losing their husbands.

One of the biggest problems the army wives are facing are the debts, which came after a mistake. The debts happened when the soldiers were overpaid and then asked to return that money.

The French government has deployed nearly 8,000 soldiers after the attacks by terrorist groups in recent years. On Saturday, news sites reported that a French soldier that was part of the operation by the government committed suicide.