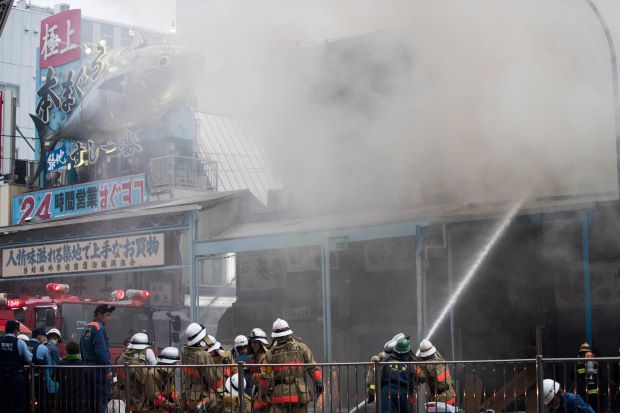 A fire has led to hundreds of people being evacuated from Tokyo’s famous Tsukiji fish market. The market, one of the largest in the world, is known for its tuna auctions and variety of seafood.

The fish market supplies many of Tokyo’s restaurants and is a popular tourist attraction. Firefighters have not revealed what caused the fire but they were at the scene shortly after it began. Dozens of firefighters were sent in to combat the fire, which forced people at the market to evacuate.

The latest reports say the famous area of the market, where the tuna auctions take place, was not affected by the fire.

The market, which was built back in 1935, has supplied many restaurants in the city for years. The market is now very important for the city and has become a popular tourist attraction.

The famous market offers a variety of seafood and every day it holds tuna auctions. The market is now where many restaurants get their supplies but the city plans to make changes to make sure it’s safe. The market is now over 80 years old and Tokyo’s governor has said it needs to be moved because of its age. The relocation will reportedly happen later this year.