Downtime between products series can be a bit of a mixed bag. I end up researching a whole heap of new stuff, sometimes meaning that the time spent to money earned ratio is a little more skewed than I would like. But sometimes I get something to review that I already researched, like, say, a razor? Granted, electric shaving isn’t exactly my specialty, but I at least know the market, have a shaving set up and a fair amount of recorded data on how various manual razors feel. This Kissliss model looks like a good product, the reviews on Amazon rate it highly, with some valid cons listed, and the arrived quickly enough too.

I had not heard of the firm before, but that isn’t much of a surprise. Kissliss are one of those low cost China based firms that have been sprouting up for a while. Manufacturing is China-based for most things these days, and you see dropshipping sites making the most of the low cost items. The thing that Kissliss has going for them over other straight up drop shippers is their Amazon affiliation. Kissliss are an Amazon FBA. This means that you gain a fair measure of consumer protections, not to mention speedy delivery. The quality of the item might not be known before hand after all, and knowing you can be guaranteed your money back in the event of a sub par purchase is always worth it.

Now the testing methodology. I will be shaving in the same style as usual. A three pass shave with prep and post. First I will be using an exfoliant, followed by a warm towel. Then I apply the hot foam, super easy to do, boil a little water in a cup and spray in the foam, give it a stir and you’re golden. Applying it, shaving once with the grain, once perpendicular to the grain and once against the grain. You have to be careful with the final pass, as improper technique can lead to in-grown hairs. I assume that using an electric will at least provide me with a rigid form while I shave, so should be good there.

I usually shave once every three days, my method does not like shorter hairs too much, but with the Kissliss Electric I went with a once per week deal. I wanted to see how the head held up to long term use, so to simulate an older head I left the cap off and did not clean it properly until I was to use it again. Bit of a mistake on my part.

On to the review, first a look at the fresh shave.

Before we get to the main event I think we need to take a look at the build itself. Product quality was a concern of mine when this one came down the line to me, but I am happy to say that it seems great. The packaging is nice, minimalist egg shell and red box. On the inside we have the razor itself, a charger cable and the manual, which comes in so many languages. The build is charged via USB, which is wonderful. I had an electric razor about ten or so years ago and once it ran out of charge I never used it again. it required a specific outlet, the kind you get in some bathrooms, and no where I have lived has ever had one of those. Here I can just plug it into my computer for an hour. One hour of charge will get you 120 minutes of use, long enough for even the largest of faces. 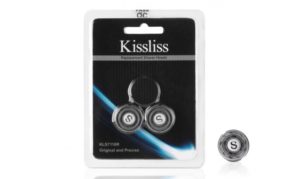 The interesting thing here is the fact that the Kissliss electric razor has been IP rated. I did a whole series on LED light bars for vehicles a while back, and I did a fair amount of research for Ingress Protection ratings. Here we have an IPX7 rating. Now. That “X” there is where the particle protection should be and while I guess it’s okay to leave that out, you are unlikely to be kicking up dust and mud at this razor, I still feel like particles are going to get into it, I mean, shaving creates lots of tiny hairs after all. If they didn’t think it was necessary then fair enough. The 7 rating for water protection is amazing. Most light bars hit that number too, it means that the product was submerged under 1 meter of water for thirty minutes and proven to work. This thing is perfect for using in the shower, though I prefer to see my face when I shave it.

Now to the shave proper. I performed my ablutions and got stuck in. The first pass was a little tricky for me. This thing shaves in multiple directions at once, and my technique is for manual razors, so my first stroke had a fair amount of pull in it. I found that if I moved the razor to an area without hair before pulling it off my face then I didn’t have that issue. The method I described in the above paragraph did not stand me in good stead for this product. A learning curve was present. I continued regardless. By the time the first pass was done my face was pretty smooth, but not up to my standard. The further passes did little to alleviate this. The end result was like using a Pace 3 to shave only with the grain. More than presentable, and for most folk fine, but I am a stickler. I shave near to the bone, and this product simply could not accommodate me. A real shame, as the first pass took me less time, once I got into the swing of things.

The results of the shave are entirely subjective. I have it on record that my shaving technique runs close, so close that when you run you hands up and down my face you cannot feel even stubble. While the look achieved by the Kissliss Electric was akin to a close shave, the feel was not. I also realize that for the vast majority of shavers the feel is less important than the look, and the speed of the shave is paramount. On those two fronts the fresh head in this razor serves well, it gets the job done quickly and with minimal hassle, assuming you know how to use it.

So, I got this blade around 10 days ago by time of writing. I have shaved myself three times in that time. Day one, day seven and just this morning. I used the electric for the first two, but am back on my Pace 7 now. I wanted to see how the Kissliss Electric held up over time, and seen as I couldn’t wait until the end of the month to write this I went and just left it sitting in my bathroom mug for the week uncleaned. I got back to it after the week had passed and cleaned out the caked on muck. It didn’t take long, the head is easy to remove, and seen as it is waterproof all I had to do was hold it under the hot water for a bit. It came up look spanking new and ready to shave.

The second shave went similarly to the first. There was the usual pull on the first stroke, but after correcting my movements I was able to complete the shave quickly. A week might not have been long enough to be honest. There are replacement heads you can buy, and I really wanted to figure out how long one lasts, but I was not able to. Other folk have said that they get a few months of use out of a head, which sounds like a good deal to me. I get around a month out of my manual heads, so they have that beat in terms of longevity.

The results were better than expected. Again, not my style of shave, but good enough in emergencies, or if you want something with a touch of precision. I’ll see about updating this article in a couple of weeks, once the head has time to wear out a little more, but for now assume a few month. Now we need to look at the price of the thing, see if that matches the quality.

And the price. When it comes to affordability these China based storefronts know where it is at. The base price of the Kissliss Electric Shaver is $70, but I have never seen it sold for that price. That said you should click here to see any current deals, coupons, or discounts available. There are a few shavers in this price range, but I have not tested those. I know what the quality of this one is like, and the price is in impulse territory too. Excellent value over all.

Upon release there were no replacement heads available, but Kissliss have fixed that issue. They sell a pack of three heads for $19.90 right now. Replacing the heads on the Kissliss Electric shaver takes only a moment. The design of this one makes cleaning and replacing a breeze, which is nice to see.

The warranty is far from perfect, but it at least lasts a long time. We have a 15 month limited warranty as standard with the Kissliss Electric. It covers factory faults, but I would argue that if you sue it for its intended purpose and it breaks within 15 months then that is a factory fault. I have had to press that issue in the past, so be sure ot dig your heels in should you need to. One thing to remember is that as an Amazon FBA you gain access to Amazon’s excellent consumer protection policies. It means that if something goes wrong in transit, or with your refund, you can appeal to them. I have had to do that in the past as well, and my experience with Amazon, and the retailers after Amazon has shouted at them, has been wonderful. I do no expect you to have issues with Kissliss, but it is still nice to have that safety net.

I have made it clear in this review that when it comes to shaving I prefer a manual razor. I like the closeness, and I like th pageantry involved in shaving with one. The electric removes some of those things, but the benefits might out weigh the issues for most people. What we have here is a shaver that will do the job quickly and painless at a rarely seen low price. The after sale support from both Kissliss and Amazon are well worth the price too.

Overall, an excellent option. If you need to shave on the run every morning then the Kissliss Electric Shaver will see you good.

To take advantage of the best current price for the Kissliss Electric Shaver click here.