Home automation is becoming more and more popular by the day. In the early 2000’s, the idea of a “smart” device didn’t really exist. Today, we define a smart device as something that is connected to the Internet. A smart watch differs from a standard digital watch because, unlike the digital watch, the smart watch is able to connect to the Internet. People have been developing more and more smart devices as the years go on, and all of these devices allow us to inch closer and closer to universal home automation. Home automation is basically having a house that is so tightly woven with smart devices that its functions can be regulated almost entirely by those smart devices.

In layman’s terms, an automated home is a home that can be configured through a smartphone or an app. One of the more versatile smart devices out there is a smart plug. Basically, this is something that you plug straight into the wall, creating a new outlet. This outlet can be controlled by other devices, which basically means that you have the power to turn any old electronic off and on whenever you like, assuming said electronic is plugged into the smart plug. It’s a simple concept, but it is capable of making a huge difference in your home. In this article, I’m going to be specifically reviewing Oittm’s Wifi Smart Plug. I’ll break down the capabilities of the smart plug, while also making sure to address how well it functions. Finally, I’ll give my opinion as to whether or not a smart plug like this one is worth your time and money. Let’s dive right in, shall we? 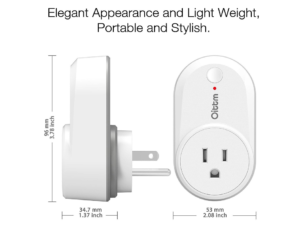 If you don’t know a lot about smart devices already, I can understand why you may be confused by some of this terminology. First, allow me to explain the concept of a hub. As I mentioned before, a smart device is a device that connects to the Internet. What usually happens is the smart device connects to a separate hub, and your smartphone is capable of connecting to this hub. Hubs can be convenient, but for the most part they’re not. They take up space, and they’re basically a whole other piece of hardware that you have to worry about on top of your standard devices. With the Oittm Wifi Smart Plug, you don’t need a hub. You can just use the Oittm Smart app to configure with the plugs directly. This alone makes these plugs substantially more convenient than some of its competition.

A concern that some people may have with a smart plug is the same concern that they would have with something like a power strip. Is it safe? Should you be worried about power surges? Should you be worried about overheating? These are honestly concerns that you should have with any kind of outlet, since you could be possibly endangering anything that you plug into it. I’m happy to tell you that you shouldn’t have any safety concerns with the Oittm Wifi Smart Plug. It’s made from a high quality ABS+PC material, which means you don’t have to worry about it catching fire or melting or anything like that. It’s also built with overload and lightning protection, so you shouldn’t worry about power surges or overcharging. This thing was definitely designed with safety and reliability in mind.

How well does the Oittm Wifi Smart Plug actually work? 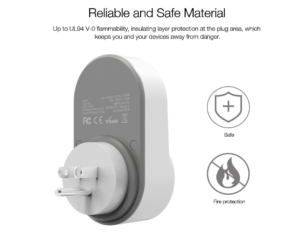 It’s one thing for a company to claim that their product is able to do all of these things, but it’s another entirely for that product to actually work. This applies even more with smart devices. Not only do you have to worry about hardware, but you also have to worry about software. If you’re worried that, in the event that you buy this smart plug, you’re going to be disappointed, you might want to hear about how well this actually works. The reviews are in, and the Oitmm Wifi Smart Plug is a device that is convenient, functional, and durable. Its integration with Alexa works remarkably well, which is good, considering Amazon’s Alexa-enabled devices are probably some of the most popular smart devices out there right now. However, if you don’t have an Amazon Echo or something similar, you should still get some great use out of these.

The Oitmm Smart app is very well-designed, which is obviously good. In many cases, the quality of a smart device’s app can be more important than the quality of the smart device itself. The Oitmm Smart app is lightweight, easy to use, and responsive. Whenever you do something within the app, you can expect your smart plugs to react instantly. The range between the app and the plugs is fantastic, too. Finally, it’s worth noting how well made these plugs actually are. A smart plug is a device that is capable of taking a lot of damage. It’s constantly having things plugged into it and unplugged from it, and it may also be bumped a lot due to its proximity to the ground. These things aren’t fragile, though. The Oitmm Wifi Smart Plug doesn’t feel like many corners were cut during its manufacturing, which should give you some peace of mind at least.

Is the Oittm Wifi Smart Plug really worth it? 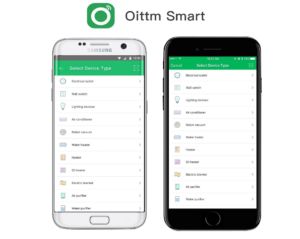 So by now, you should know a little bit more about the Oitmm Wifi Smart Plug and about smart devices in general. Now you may be wondering whether or not something like this is worth having in your home. Consider how a smart plug could hypothetically be used in your home. Most obviously, you could connect a lamp to a smart plug. This would give you the ability to control the lighting in your home from an app. You can also connect things like televisions and heaters. There isn’t much of a limit to what you can use this device for. As long as something can be plugged into an outlet, it can be manipulated by this smart plug. Needless to say, smart plugs are very versatile in how they can improve your home life.

Once you’re sold on the idea of owning a smart plug in general, you may wonder if this one specifically is right for you. As far as price goes, this isn’t too unreasonable. It’s within the same range of comparable products, and it starts to look like a bit of a bargain once you consider how high quality this smart plug is compared to some of its competition. With the Oittm Wifi Smart Plug, you have everything that I think someone could expect from a smart plug. It’s easy to use, it’s intuitive, and it’s well made. I don’t think that you can really ask for much more out of it! There aren’t many bells or whistles associated with this product, sure, but I don’t think that it really needs any. It does what it needs to do, and it does that very well. If you’re in the market for a smart plug, then I really think you should consider introducing the Oittm Wifi Smart Plug to your home.

To take advantage of all the current discounts available automatically click here.