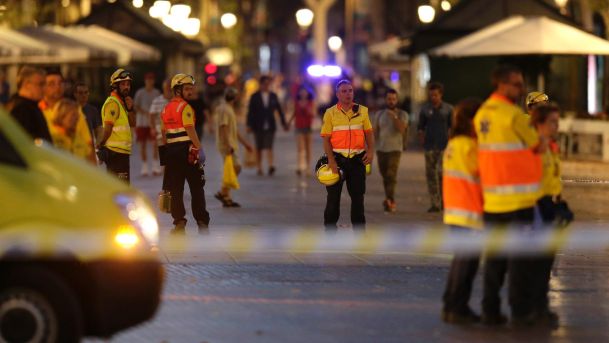 Thirteen people have lost their lives and many more are injured after a van drove into crowds at Barcelona’s Las Ramblas area.

Police and officials have confirmed that it is a terrorist attack. Authorities have also arrested two people but recently said that the driver of the van has not been caught. According to Spanish media reports, the driver fled the scene on foot. The van used in the attack was rented in the city.

The vehicle drove through the pedestrian area and began hitting people. Those who noticed the van ran to stores and other places for cover.

Police have released a picture of a man named as Driss Oubakir. Authorities know the name and other information since his documents were used to rent the van. The man, who local media says is in his 20s, has told police he was not involved, according to reports. He has told them that his documents were stolen. The van used in the attack was a white Fiat.

The Islamic State group released a statement through its news agency saying that it was behind the van attack. The group said the attack had been done by Islamic State soldiers but did not reveal any more information.

Las Ramblas is a popular tourist area and according to witnesses, the place was crowded at the time.

Witnesses say police reacted quickly and began telling tourists and residents to move and find safe areas. Images show police surrounding the van after the attack. Residents and tourists ran in stores, markets and other places for cover. One witness, who was visiting the area with his family, told the media that he was eating in the market when the attack happened. He says hundreds of people started running to the market and that he and his family started running as well. He added that police pushed them into a shop and that they had been sheltering there for more than an hour.

According to reports, three German citizens are among the dead. Australia’s Foreign Minister Julie Bishop said during a press conference that one Australian woman is in a hospital in a serious but stable condition.

Police confirmed just a few minutes ago that the driver is still on the run. According to reports, one of the two detained suspects is a Spanish national while the other is a Moroccan citizen.