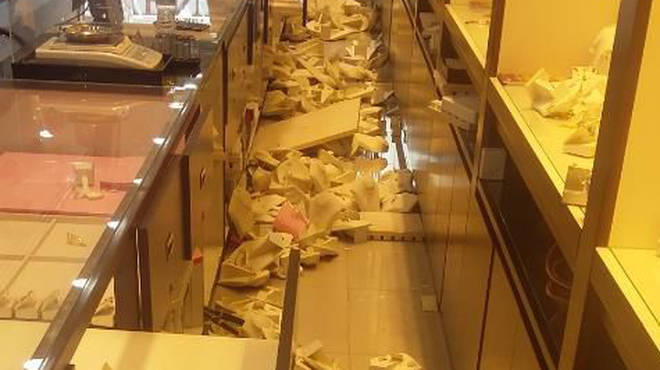 A group of thieves have stolen 1.8 million pounds worth of gold and other jewels from a jewelry shop in London. The thieves made a hole to enter the shop, according to police.

On Friday, CCTV footage and images of the robbery were released. The thieves smashed a hole in the wall of the Joyalukkas shop in east London. The group of thieves reportedly entered the shop through the hole and stole earrings, bracelets and diamond necklaces.

The shop is one of a few in the area that sell jewelry. According to reports, several men were hanging around the area just a few hours before the robbery happened. Employees reported the incident after opening the shop and finding that the jewelry had been stolen. The robbery was reported on July 10.

A police official said it was a planned and audacious raid on the shop. The official revealed that 1.8 million pounds of items had been stolen from the shop. He added that it took the suspects around 20 minutes to make the hole but that it must have been very noisy, so he is asking anyone who heard or saw something to contact police.

Police believe a group of eight thieves were part of the robbery and that three entered the shop to steal the jewelry. Police believe the other five suspects stood nearby and acted as lookouts.

Police say the men spent around three hours inside the shop. At the scene, they found a sledgehammer and a crow bar. Police believe those tools were used to make the hole, which they escaped through after taking the jewelry.

Police have made no arrests but have asked everyone who has been offered jewelry to contact them. According to the statement from police, the three men inside had their faces covered. They say the suspects are in their mid 30s.