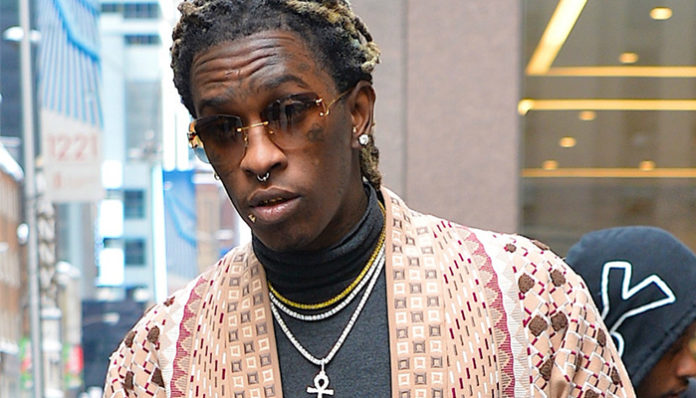 Known for his unique vocal style, Young Thug broke into the rap scene with his hit single, Stoner in 2014. Hailing from Atlanta, Georgia, he released a number of independent mixtapes in the early 2010’s including the I Came From Nothing, I Came From Nothing 2, and I Came From Nothing 3. However, it wasn’t until a few years later that his popularity began to climb.

Born on August 16, 1991 in Atlanta Georgia, Young Thug (Real Name: Jeffery Lamar Williams) was raised in the neighbourhood of Sylvan Hills with his ten brothers and sisters. Some of the other rappers that came from the same area include Ludacris, 2 Chains, and Wacka Flocka Flame. In fact, his childhood friend, PeeWee Longway had lived just a few doors down from his home.

Having always been into rap as a teen, he later recorded and released the I Came from Nothing mixtape series between 2011 and 2012. Ultimately, it was after that that he captured the attention of Gucci Mane, a fellow artist from Atlanta. Recognizing Young Thug’s potential in the music scene, he later signed him to his record label, 1017 Brick Squad Records in 2013.

How Did Young Thug Become Famous

Shortly afterwards, the rapper came out with his first major label release, the mixtape 1017 Thug. Applauded for its original style, it garnered a significant amount of attention compared to his earlier works. In fact, it was later featured on several publications including Complex Magazine and the Rolling Stone. Hailed as one of the best mixtapes of 2013, the mixtape successfully launched his career as a recording artist.

On February 4, 2014, Young Thug dropped his debut single, Stoner as a digital download. Produced by Dun Deal, the hip hop track successfully reached number 47 on the Billboard Hot 100 and number 13 on the Hot R&B Songs Chart. An overall hit, the song was later featured on HPG 3, a music compilation by DJ Spinz. Met with praise, Stoner has since received gold accreditation by the RIAA.

In April 2015, the artist released his first charting mixtape, Barter 6 under 300 Entertainment. A mix of trap and hip hop, its production was handled by Young Thug himself with help from London on da Track, and Wheezy, among others. A solid addition to his growing catalogue, it boasted thirteen tracks including Never Had It, Knocked Off, Amazing, Dream, Numbers, Just Might Be, and Check. On the charts, it peaked at number 22 on the Billboard 200 and number 5 on the Top Hip Hop Albums.

From there, Young Thug came out with two additional mixtapes before reaching another high with I’m Up in 2016. Made available on February 5, 2016, the project featured a number of guest appearances from Duke, Trouble, Lil Dark, Offset, Solo Lucci, and Young Butta. Upon its release, it entered the Billboard Top 200 at number 22 with 21,000 first week sales. A relative hit, later reached number 22 on the Billboard Top 200 and number 6 on the Top R&B Albums Chart.

Then in March, he released the mixtape, Slime Season 3. Executively produced by London on da Track, eight new tracks were featured including Slime Shit, Worth It, Tattoos, With Them, and Memo. Upon its release, it entered the Billboard Top 200 at number seven with 38,000 units sold in the first week. Outside of the United States, it also charted in France and Canada.

On a roll, he later dropped Jeffery on August 26, 2016. His third mixtape in a year, it included guest appearances from Wyclef Jean, Travis Scott, Gucci Mane, and Young Scooter. Originally announced that July, it was met with critical acclaim upon its release. As far as chart performance goes, it debuted the Billboard Top 200 at number eight and the Billboard Top R&B Albums chart at number five.

Most recently on June 16, 2017, Young Thug released the mixtape, Beautiful Thugger Girls. Produced in part by Canadian rapper Drake, the project contained a mix of pop and hip hop tracks including For Y’all, Me or Us, You Said, Get High, Oh Yeah, and Tomorrow Till Infinity. Similar to Jeffery, it entered the Billboard 200 at number eight with 37,000 sales in the initial week.

Throughout his career, Young Thug has teamed up with several artists including YC, Peewee Longway, Trapboy Freddy, T.I., Rich Gang, and Rae Sremmurd to name a few. Some of his most noteworthy collaborative works include the tracks Throw Sum Mo, About the Money, and Hookah.

In the spring of 2015, the rapper became engaged to Jerrika Karlae, the owner of a swimsuit line. According to reports, the two had met at Gucci Mane’s studio a few years ago. Interestingly enough, he had actually been rejected by her once, before the two got together. However, Young Thug’s perseverance later earned the admiration of Karlae, and the pair started dating.

A former teen parent, he has six children by four different women.

A philanthropist at heart, the rapper donated the entirety of the proceeds from one of his 2017 sold-out concerts to Planned Parenthood, after it was announced that funding to the organization would be cut.

Considering how popular he is in the rap scene, it’s not surprising to know that he’s received his fair share of recognitions over the year.

In 2014, Young Thug garnered three BET Hip Hop Awards for the categories of Best Club Banger, Best Hip Hop Style, and Who Blew Up. Later in 2015, his song, Throw Sum Mo (With Rae Sremmurd and Nicki Minaj) was nominated for a Coca Cola Viewer’s Award. 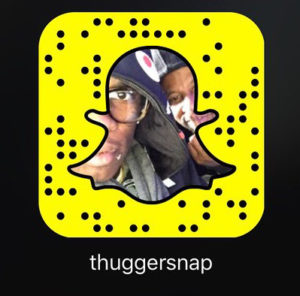 Despite being a little late to the party, the rapper announced last January that he had joined Snapchat. By the likes and retweets that his Tweet received, it’s fair to say that he received a nice welcome to the app. If you’d like to add Young Thug on Snapchat, you can do so by clicking here.

Want to follow him on the popular photo/video sharing app? You can find Young Thug on Instagram at @thuggerthugger1. From the looks of it, he’s already amassed well over 4 million followers!

Looking for an easy way to stay up to date with the 25-year-old? Why not follow him on Twitter? You can find his account at @youngthug.

If you feel like listening to some of his tracks, you can do so at his official Youtube channel at @YoungThugOnline. Hugely popular, his page has been viewed well over one billion times as of 2017!