5 Seconds of Summer is a pop-punk band from Australia which began its life in 2011. They are commonly referred to as 5SOS by their fans. 5 Seconds of Summer fans are typically teenagers or Millenials who were introduced to the Aussie’s sound when the band toured with the famous teenyboppers, One Direction. Their fandom is plainly known as 5SOSFam.

How 5 Seconds of Summer Got Famous

As with many bands and musicians today, 5 Seconds of Summer got their start on YouTube. They covered songs such as “Next to You” by Chris Brown, “Please Don’t Go” by Mike Posner, and most famously, “What I Like About You” by the Romantics. Three of the band’s members – Calum Hood, Luke Hemmings, and Michael Clifford- met when they attended school at Norwest Christian College. The Norwest Christian College is a private high school in New South Wales.

The first videos 5 Seconds of Summer posted were on Luke Hemmings personal Youtube account, first of Luke singing alone, and then joined by his future bandmate. They eventually were joined by Ashton Irwin, who was a drummer. As their videos generated more views, the boys drew the interest of major labels and ended up signing with Sony ATV Music Publishing. 5SOS came out with an EP called Unplugged that did quite well despite only getting organic promotion through social media platforms and word of mouth. It certainly did not hurt that members of One Direction were fans of 5 Seconds of Summer, and shared the upcoming band’s videos with their well-established fans.

The band has certainly been busy since their start in 2011. 5SOS has released two albums since their EP first came out – a self-titled record in 2014, and an album called Sounds Good Feels Good just a year later. They’ve spent even more time touring the world than they have in the studio. The young men have headlined 10 tours of their own and performed as the opening act for 5 more, including One Direction. After some differences with their label, 5SOS formed their own record label called Hi or Hey Records. They release their own music through the label and have signed another band known as Hey Violet.

Originally, 5SOS had a stringent No Girlfriends edict in place so that they would finally finish their long awaited self-titled album, which was released almost 4 years after they became popular.  Three of the four bandmates eventually broke that rule – Luke, Ashton, and Calum. Luke might regret that now – his now ex-girl Arzaylea has accused the star of being homophobic and racist. Even worse, the 20-something-year-old Luke Hemmings has been cited with drug use, spending money on sex workers, and “finishing fast.” Who knows if any of it’s true, or if Arzaylea was just feeling the need to get the star in trouble? We may never be sure. 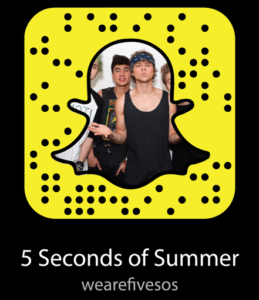 Want to add 5 Seconds of Summer to your Snapchat feed? Just click here.

While 5SOS has many imitators and fan pages on Facebook, there is only one account where you can be sure that you are getting the real thing, and that is the official 5 Seconds of Summer official Facebook page. You can join their 10,286,190 followers by clicking here. The page alerts fans to their upcoming events – sadly for the North American 5SOSFam, they are nowhere near the USA for a bit, opting instead to play shows in Russia and Chile. The 5SOS Facebook content includes many posts from their tour, such as professional photos and candid shots. It seems like the boys also enjoy posting throwbacks to their older content – they post music videos, and tell their fans how long it has been since the videos were released. The comment sections of these posts have fans reminiscing about when the song first came out, and the memories attached to it. It’s a sweet and refreshing use of a comments section.

Their username for the photo-sharing site is 5SOS, but you can follow them by clicking here. The band has over 7 million fans on this social media platform. They use it as a medium for sharing collages of tour photos, intimate seeming black and white pics of the boys playing music or chilling on the couch, and, my personal fav, a B&W shot of Calum cuddling with his fuzzy puppy, the two of them looking cozy on his bed and covered by his sweatshirt. 5SOS has posted almost 2000 shots, so there is no shortage of content to explore here.

Twitter seems to be the main platform that 5 Seconds of Summer use to communicate with the 5SOSFam. They retweet and comment on fan postings to them. The individual band members are often retweeted for a more cohesive and interactive experience – you feel like you are following a real group of people instead of just the commercial aspect of the band. Luke and Michael are the most frequent contributors. They are very complimentary of their fans, and often let the Fam know just how much they are appreciated. 5SOS fans clearly appreciate them right back – the rock group has 11 million followers on the microblogging site, and you can follow along by clicking here. Their twitter handle is, of course, 5SOS.

What is 5 Seconds of Summer’s Kik Username or Code?

While the band as a whole is not on the messaging app, according to a fan on askmefast.com, some of the members of 5SOS have Kik names. With the understanding that this may not be the most reliable source, here they are:

The band is apparently still using Liam’s YouTube account as their own. The username is “hemmo19.” You can join their 2 million+ followers by clicking here. You can still see their original, “guy in a bedroom with a guitar” videos that they began with over six years ago if you scroll far enough down. Lately, most of their content appears to be candid videos of the boys speaking to their fans about the tour and other various topics. Their VEVO channel has many of their music videos and live performances, and they have a well-organized playlist page of content.