Bella Hadid is one of America’s most famous models. The modeling trait is in her family genes. Her mother, Yolanda Hadid, is Bella followed in her older sister’s footsteps. The blue eyed beauty went from doing small commercials when she was just 16 to becoming the Model of the Year in 2016 at the Daily Front Row’s Fashion Awards. Quite impressive for someone as young as she is to gain such popularity in just four years.

How Bella Hadid Got Famous

The model was born Isabella Khair Hadid on October 9, 1996, in Los Angeles California. Her father was a real estate developer, but her mother modeled all over the world, before becoming one of the real housewives of Beverly Hills. Bella’s older sister, GiGi, is also a model. They grew up on a ranch in Santa Barbara California before moving to New York City. Originally, Bella wanted to be an equestrian in the 2016 Olympics in Rio de Janeiro. Her dreams were shattered when it was discovered that she had Chronic Lyme’s Disease, and could not compete at that level. Next, Bella showed interest in photography and started attending the Parsons School of Design. Before she enrolled, she signed to IMG modeling, and when her modeling career took off she dropped out of school.

When Bella hated was just 16, she landed a modeling gig doing a Flynn Sky commercial project. She modeled in a piece called Swan sittings by photographer Les Moore alongside Ben Barnes, a famous actor. Bella modeled for Hannah Hayes in a 2013 collection. She also did campaign work for Chrome Hearts, a luxury fashion line, in the summer of 2013 as well as the summer of 2014. Once she was signed to IMG models on August 21, 2014, Bella Hadid really hit it big.

As Bella Hadid got more and more popular, she got into magazine shoots such as Vogue, Teen Vogue, Pop Magazine, Glamour Magazine, and two fashion books for Carine Roitfeld, who is the former editor in chief for Vogue Paris. So far in 2017, she has collaborated with her sister Gigi for a Tommy Hilfiger show, and she has walked for Ralph Lauren and Oscar de la Renta. She even opened London Fashion week by walking for Versace Versus. She is currently a brand ambassador for Dior Beauty, and makes videos on called ‘Dior Makeup With Bella Hadid.” She also is an ambassador for Bulgari accessories and TAG Heuer fashion accessories and watches.

The model began dating Abel Makkonen Tesfaye, also known as Canadian singer The Weeknd in 2015, but the relationship couldn’t last through their grueling schedules, and they called in quits in the fall of 2016. Most recently, she has been rumored to be in a thing with boxer Anthony Joshua since they met at a GQ function. 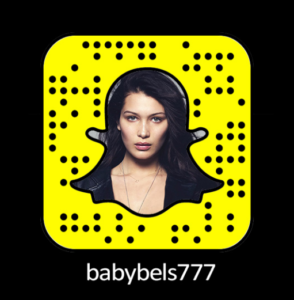 Bella does not seem to be a fan of social media besides Snapchat and Instagram. There is a page that claims to be the official Bella Hadid, but it does not have a checkmark confirming it is, in fact, the celebrity, and it has not been updated since 2013. Regardly, you can find it here if you are curious. There are some adorable older pictures on the page, but few other posts. There are also a few fan pages dedicated to the model, but Bella herself is nowhere to be found.

You can find lots of Bella’s professional modeling pictures as well as candids on Instagram. The Muslim model has 14.6 followers on the photo-sharing site. You can join them by clicking here. She regularly posts video updates and photos from her travels. She shows some of her political and philanthropic sides recently with reactions to the chaos of the North Carolina protests, and a poster for UNICEF on World Humanitarian Day.

You can find her on Twitter under the username bellahadid, or by clicking here. The model has over 800,000 followers. She mostly uses the micro-blogging platform as a marketing tool, but occasionally Bella retweets her fans with a hearty “Thank You!” or shares inspirational quotes and change.org petitions. She uses her fame to advocate for Transgender soldiers who were affected by US President Donald Trump’s recent ban on Trans people serving in the armed forces. In July, she told her Twitter fans that she was not dating anyone except herself and her happiness.

What is Bella Hadid’s Kik Username or Code?

In 2015, a fake Bella Hadid account tweeted that her Kik name was bellshadidx. It does not look like the actual Bella Hadid is on the messenger app – or at least she does not reveal the username publically!

Bella does not have an official YouTube page of her own, but that doesn’t mean that you can’t find lots of juicy content. Vogue has a video of Bella giving a beauty guide for when you are feeling wiped out and jet-lagged which you can find by clicking here. W Magazine gives a tour of Bella’s home, and a view of her in the bath tub – although she is in a bathing suit and covered in bubbles. You can find lots of videos of her just by searching for Bella Hadid on YouTube.