As his name suggests, Chance the Rapper is an American rapper, songwriter, singer, record producer, and philanthropist that started to get recognition in 2013. Chance has been busy since his debut into the spotlight and most recently won an Emmy for his song Last Christmas which was featured on Saturday Night Live.

How Chance the Rapper Got Famous

Chance the rapper was born Chancellor Jonathan Bennett on April 16, 1993, in Chicago Illinois. While his parents were both heavily involved in politics, they also got him interested in music. He was immersed in Jazz and Gospel while growing up, and when he developed his own interest in music, he started with Michael Jackson’s extensive collection. His curiosity in hip-hop was peaked by Kanye West’s Through the Wire which was playing on the radio as he walked through Hyde Park. He immediately went out to purchase the album and listened to it straight through. It, as well as Kanye West, was the inspiration behind Chance the Rapper’s career as a hip-hop artist.

He started writing and performing his own music when he was in the sixth grade. Chance’s cousin had a studio that he was allowed to use, and he started performing at a local library when they had open mic nights. He entered and took second place in a Chicago songwriting contest. He was able to meet the Chicago Mayor Richard Daley, who told him that he enjoyed Chance’s music. That was not the only political figure he got the opportunity to meet – due to his family’s political influence, he met President Obama shortly after his 2008 presidential win.

Chance released a single off his mixtape project called 10 Day in late 2011. He was inspired by getting suspended in his senior year of high school for marijuana possession. It was noticed a couple months later by Complex magazine- an NYC media platform which reports on new trends- which declared Chance one of the “10 New Chicago Rappers to Watch Out For.” The actual mixtape was dropped in the spring of 2012, and it attracted the attention of Forbes magazine.

Chance the Rapper’s second release, Acid Rap, was even more well-received. It featured guest appearances by popular hip hop artists like Ab-Soul and Childish Gambino. It charted at #63 on Billboard’s Top R&B/Hip Hop Albums with the help of fan downloads on Amazon and iTunes., and was put on several “best albums of 2013” lists. Chance was involved in other projects at this time. He lectured at Harvard University, performed at Bonnaroo, released a short film, came out with a new song called Family Matters, and performed on The Late Show with Stephen Colbert.

Most recently, Chance appeared on Kanye West’s Life of Pablo, and also co-wrote a few songs on his inspiration’s album. He released a third mixtape in May of 2016 called Coloring Book. Chance became the face of H&M’s new campaign and went on a World Tour promoting his album. He did end up canceling a large amount of the shows due to personal reasons.

While he tends to be a private person, he has opened up a couple times about his relationship with his long time (now ex) girlfriend, Kirsten Corley. He had a daughter with her in September of 2015. The couple decided not to involve the child, Kensli, in the public life for a year, when they decided to post a picture of their daughter on Instagram. They stopped dating and living together in early 2016, which began a long-running child custody battle that is still going on. 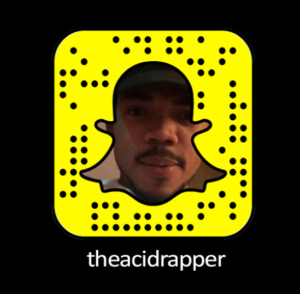 Want to add Chance the Rapper to your Snapchat feed? Just click here.

It doesn’t look like Chance the Rapper has a public Facebook profile page, but you can still follow his official Facebook page here. As with most of his social media pages, Chance uses this platform to promote himself and his brand. You can find new tour dates, see photos and videos, and get updates on new merchandise in his online store. Chance’s Facebook page has over 1.8 million followers.

You can join Chance’s 6.4 million Instagram followers by clicking here or searching for his username ChancetheRapper. He posts many promotional photos and videos on the pic sharing site, along with the occasional candid.

His Twitter handle is ChancetheRapper, but he goes by Lil Chano from 79th on the microblogging platform. He uses this site to post his thoughts and feelings, and really communicate with his 5.31 million followers. You can join them by clicking here. You can expect content like Chance’s reactions to the lastest boxing match, retweets of the controversial Colin Kaepernick, as well as the usual promotions.

What is Chance the Rapper’s Kik Username or Code?

The hip-hop artist’s official YouTube boasts 902,288 subscribers, which you can join by clicking here. You can find official videos, live performances, and occasional candid videos such as Chance Does Acid in Mexico and Chance Turns 21.