DiLascia Update – What Happened After The Profit

Patrick DiLascia started his clothing business in Lol Angeles after uprooting his whole life from New York City.  He gave his brand of screen printed t-shirts his last name. He built up his business from nothing, starting with a website and a storefront, and moved to serving big stores such as Nordstrom and Barney’s New York. His brother and sister ended up following out to LA to help him with his dream.  When Patrick’s largest retailer for his products closed,  he was in a bit of a bind. Everything started to fall apart,  and Patrick and his siblings were at each other’s throats.  They began to lose sales, and fall deeper and deeper into debt.
Marcus likes Patrick’s designs, and he had already invested in some fashion brands in the recent years. He saw the potential for investment.  He was willing to help, but he wanted to see if he could harness Patrick’s creativity first.  Marcus Lemonis was on a mission to visit DiLascia and see what he could do to help take the struggling clothing business to the next level. 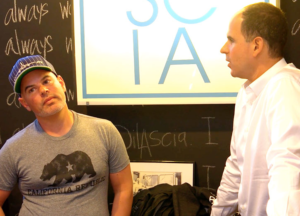 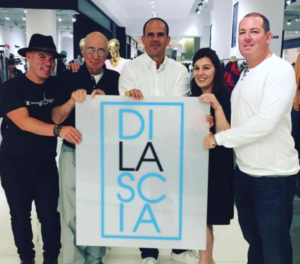 Since they filmed the show in April of 2016, DiLascia seems to be doing quite well for itself. Patrick joined forces with Marcus’s ML Fashion Group in New York City, and they currently run the e-commerce portion of the DiLascia brand. The DiLascia website currently has a small section dedicated to male and female “People, process, and product” tee shirts. They never did expand their women’s line. The women’s section of the website simply features four graphic tees – and that is literally it.

Patrick seems to be on to new and different things. He launched another brand called Patrick that was meant to be a higher end line of fashion than the tee shirt brand. He once again has a brick-and-mortar store in LA, this time under the Patrick name. The wholesale price for hoodies is apparently up to $85, so I shudder to think what the things retail for. They are very attractive, but clearly out of my price range. The store actually shares space with the DiLascia warehouse and factory. If you want to check out the new website, click here. The description claims to bring you the best in “casual luxury.” There’s a man’s line, and a girls and boys line – but women’s clothing is clearly absent from the page. Perhaps Patrick got burned out trying to meet women’s clothing needs on The Profit, or perhaps he’ll add some in later.