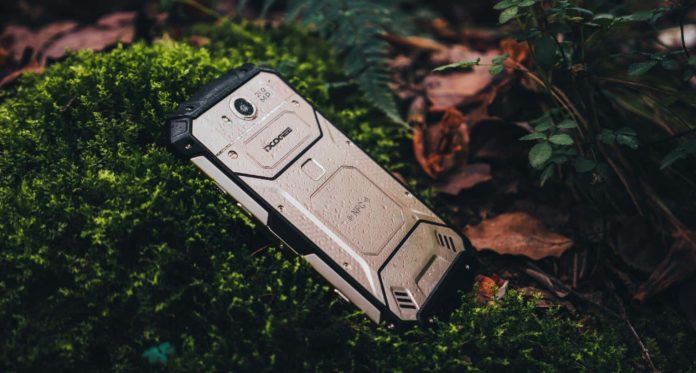 A whole host of phones coming out of Doogee recently. I got to check out a new one a few days ago, the S60, and it is a little different from the others. The marketing wants to position it as the premier, go-to smart phone for the hard working man, and while the copy on site might be more than a little stilted, there is no denying that this is a phone that can take a pounding.

I love the Chinese smartphone industry. There is so many more options over there, but then you also have to deal with the occasional lemon, not to mention less than stellar customer support after purchasing. But it has led to a deluge of mid range to upper mid range phones flooding the market, at excellent prices. So long as you know what you are getting into before you buy, the aforementioned after care support, then there is a lot to love about it. Doogee have been trying to branch out in recent years, with a successful push in Spain under their belt they are looking to crack the tough nut that is the english speaking market. More power to them, but there are a few issues with their approach.

The builds they have come up with all seem targeted, which is a good thing. They have the Mix series, which lack a bezel, the BL series, which has surprisingly good specs in its price point, the Shoot series, focusing on camera quality, and a few others. The S series phones are built to take a beating. The specs are siting nicely in the mid range, but with an IP 68 rating you would be hard pressed to drown the thing. There are a number of battery saving features included in this range, not to mention the formidable 5,580mAh battery. Screen res is the standard 1080 x 1920, far from the best but understandable, and it come with two CPUs, a feature that most firms are opting for, in order to run a lower clock CPU during down time, saving battery.

So let’s break this one down, see if it is worth the money. 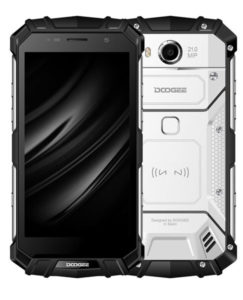 Doogee are a newer name on the market, being founded in 2013. They got their start with a few licensed soccer phones for the Spanish market, that proved to be a bit of a hit. Since then they have relocated to China and hit the ground running, with a whole host of models on the market. Being a fundamentally Chinese firm means that the tech involved is fantastic, while the price is nice and low. You do pay for that long term though, with less than amazing warranties and after care support in general, but every phone comes with a downside.

So the build quality. It is here that the S60 is really selling itself. Looking at the handset itself, it does look like it’ll take a hit. The angular design reminds of Iron Man, which I imagine was at least partially intentional. It fits in my hand well enough,l but it is far from the the ergonomic thing in existence. There are three color options, but they are all too muted to matter. They might match you khakis though, but beyond that we are not looking at a particularly pretty build. But, pretty is not what this is about. It is IP rated to 68. When I reviewed a number of Light bars a few months back I dove into the world of Ingress protection, and came out the wiser for it. IP 68 is not the top, that would be the rare as all hell IP 69K, but 68 is still amazing. The first number related to the particle protection, so a 6 is the top, grit, dirt, sand, salt, sugar, ketchup, this thing will stand up to all of them. The second number relates to the water protection, and an 8 is rated to withstand submerging below 1m for at least 30 minutes. I ran a nice hot bath for my S60, put in some nice crusty bath bombs, and found it more than capable of playing smooth jazz under all the bubbles, so good job Doogee.

The OS is Android 7.0, which is nice, but Doogee make their own range of apps to go with it. I am not a fan of using them to be honest. They work, but the nice thing about android is the open nature, and the plethora of options. I would advise custom booting this build, removing the tough to remove stains and installing your own software, just to be on the safe side.

The specs are not amazing, but there are number of neat little additions in here that I was not expecting. I still use a Nexus 6 day to day, and it does not have that fancy new “Octo core” CPU that is all the rage right now. Octo core is a bit of a misnomer, it’s ran like two different CPUs, one with a lower clock to run during low intensity operations, saving on battery. It’s  Helio P25, which is a great chip, while the integrated GPU is the mali-T880, which is a little lack luster. It’ll run mobile games, but if you are interested in emulators for 3D consoles there are better options out there. Anything with a higher end Adreno is better, while Nvidia offer the best on the go GPUs on the market. There is no fast charging option, but there is wireless charging, and a wireless charge stand, which is a nice touch. The battery is a bit of a beast, sitting at 5580mAh, so more than enough to last a two days or so. On board RAM is great, 6GB of LPDDR4x, not the fasted thing in the world, but great power draw over time, and there is plenty of it. All models come with 64GB of storage as well.

I am not much of a phot taker, but I realize it is important for most folk out there. There are two cameras here, rear and front mounted. The rear camera is an older Sony build, the IMX 230. Totals at 21MP, which is impressive, and there are a number of shooting modes, but nothing out of the ordinary. High end phones these days are screaming about their cameras, with depth of field effects and HDR, so seeing something so basic on this is a bit of a let down, makes it harder to recommend. But you are able to shoot under water, which might be enough to make you consider parting with your cash. The front camera is a simple 87 degree 8MP build, good for video chat etc.

Overall I am impressed. I see what they are going for, and I feel that they hit all the prerequisites for a sturdy phone. The specs are not much to write home about, but they are more than up to the tasks on a day to day basis. The camera is okay, not amazing, but far from terrible. the under water shooting is a real boon.

And now we get to the price. It depends on where you go, but I have been able to find the S60 in the $299.99 price bracket, which is a very fair price. There are a number of other options in that range, but none fit into the S60’s niche. They do offer a less rugged and less specced S30 model, in a lower price point, but if you are in the market for a decent phone and an IP 68 rating then you need to get the Doogee S60.

The warranty is about as good as you would think. A full year of coverage with a fair number of caveats, not least of which being that it is limited coverage. That means only factory faults count. If the phone fails during normal use than I would call that a factory fault, and considering that this is a rugged outdoor phone then normal use is a little broader than is usual. I have had a bit of trouble with warranties for cheaper Chinese products in the past, but then I have reports of people being impressed with Doogee’s customer support. I am on the fence, until I need something from them I can only go with the older wisdom. There are a number of things you can do to keep yourself covered, buying from Amazon is always a good bet, that way you get their customer protection policies on top of whatever warranty Doogee offer.

You can get the s60 on Amazon by clicking here.

The price is fantastic, few other handsets offer this level of protection in this price point. The warranty is exactly what I expected, serviceable, if not amazing. Considering the price and the performance it is small price to pay.

The Doogee S60 positions itself as the premier rugged smartphone on the market, and I feel like they have done it. There are a number of issues with the core concept, biggest of which is, why not buy a better phone and put a good case on it? The smaller form factor inherent to this one, and the fact that the specs are actually good enough to get by with are nice counters to that. The low price of entry is great, and while the warranty is far from perfect, there are a number of things you can do to protect yourself. Overall, while it is far from perfect, I can certainly see a market for this build, and if you want the cheapest way to take photos under water, other than wrapping a camera in saran wrap, then the S60 is excellent value at $300.

If you would like to enter for a chance to win a Free Doogee S60 you can click here.

Entering the competition is simple:

2. Leave a comment here with your answers to the questions on that page and #doogees60

3. Share the page from part 2 on your FB timeline + include your answers from part 2.

4. On October 17th they are going to select 3 winners who not only followed the steps above but correct answered all the questions. What are you waiting for! Get to it!