Fifth Harmony Snapchat Name- What is Their Snapchat Username & Snapcode?

Fifth Harmony is an American girl group ( kind of like the opposite of a boy band) from Miami. They are well known for appearing on The X Factor in 2012. Even though they only finished third place, they still managed to land a deal with Simon Cowell and his record company, as well as Epic Records.

How Fifth Harmony Got Famous

Way back in 2012, Fifth Harmony did not yet exist. The five members, Ally Brooke, Camila Cabello, Normani Kordei, Dinah Jane, and Lauren Jauregui were each separate contestants on the X Factor. Each of them was not able to advance to the Teens category, and it was decided that they had enough talent for a five person group. This qualified them for a spot in the Groups category. Fifth Harmony was put together by Simon Cowell, with the help of guest judge Demi Lovato.

Their first official song as a group was a gorgeous rendition of Impossible by Shontelle. The song was very popular in both the United States and Canada at that time. The judges seem to enthrall with their performance. Even Mark Anthony, a former popular singer in the 90s, called their performance unbelievable. Fifth Harmony went through several name changes during this period. They were originally called The Lyla’s but had to change it when they got a copyright infringement notice from four of Bruno Mars’ sisters. Next, the group changes their name to 1432. Their first performance as 1432 was a cover of Taylor Swift’s We Are Never Ever Getting Back Together. Simon Cal did not like the name change, so they left it up to the public to change it. The name that the public picked was Fifth Harmony.

Fifth Harmony went all the way to the semifinals, where they performed Ellie Goulding’s Anything Could Happen, and Let It Be by The Beatles. Although they didn’t receive enough votes to advance to the Top Two, they still saw success. About a month after the season two finale, they were signed to Simon Cowell’s record label Syco music in a joint deal with Epic Records. They were recognized as the Next Pop Superstar of 2013 by Popdust. In order to drum up fans, they began recording cover songs on YouTube. The group was so good that they even got praise from several of the original artists for their covers. On October 22 of 2013, Fifth Harmony released their debut extended play called Better Together. It peaked on the Billboard Top 200 at number six.

In 2015, the group released a full album called Reflection, which had a song written by the popular Meghan Trainor of All About That Bass fame. The album was popular and got on several End of Year lists. They released their second studio album on May 27, 2016. It charted at number four, and was popular worldwide. At the end of 2016, they lost a band member, but the rest of the group continued on. They released a new single, which they performed on The Tonight Show with Jimmy Fallon. The third studio album called Fifth Harmony was released in late summer of 2017. 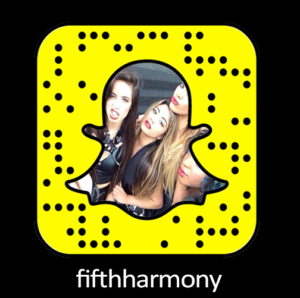 Fifth Harmony is followed by over 7.7 million people on Facebook. That’s more than double the population of Los Angeles! You can join the rest of the Harmonizers by clicking here. They post about their upcoming events, as well as exclusive photos from past concerts. Fifth Harmony participates in a lot of charity and philanthropy, and they often post updates about the people they are helping. Fifth Harmony enjoys keeping their fans in the loop on what is going on behind the scenes of their videos, so there is lots of content about that.
What is Fifth Harmony’s Instagram name?

Fifth Harmony’s official Instagram username is, of course, fifthharmony. They use the photo sharing site to post pics of their experiences on the road, as well as official pictures from their concerts. The girls have over 9.7 million followers on this social media platform, and you can join the rest of the Harmonizers by clicking here. In return, you’ll get some candids of the girls, but mostly they post promotional material.
What is Fifth Harmony’s Twitter name?

The pop band has 4.5 million followers on the microblogging site. Join them here to see promotional photos and exclusive videos of the girls. Sometimes you will get updates as they travel around, and they often retweet fans or celebrities that they like.
What is Fifth Harmony’s Kik Username or Code?

As is the case with most celebrities, the girls of Fifth Harmony do not seem to have a joint Kik messenger account. It would be difficult to maintain if they did.
What is Fifth Harmony’s YouTube Page?

The girl group has a Youtube account with almost 10 million subscribers. They have been active since 2013 when they were trying to get fans after appearing on X Factor. If you decide to subscribe, you can find live performances, official videos, behind the scenes footage, as well as their old cover songs.