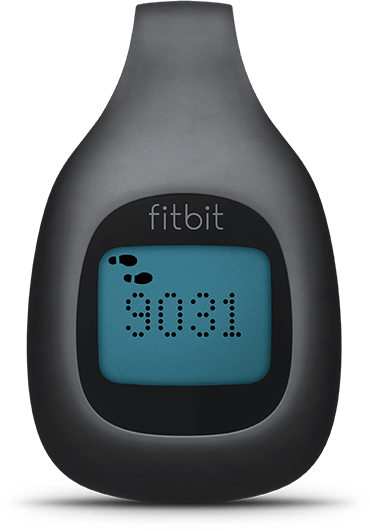 Fitbit is known for it’s premium, and exorbitantly priced activity trackers, like the Fitbit Blaze and Fitbit Charge 2. Although these are priced at over $100, the Fitbit Zip, Fitbit’s cheapest tracker, can be found for just $59.99. It’s worlds away from smartwatches or other activity trackers costing hundreds more, with it’s closest relative being the lowly dumb pedometer. It’s about the same size as one too, and does almost the same thing. Although it’s a deceptively simple device, it doesn’t fall short on utility or practicality. Just like the more expensive devices, the Fitbit Zip can sync wirelessly with the Fitbit app for iOS and Android, and unlike most other wearable trackers, has a battery life of 6 months (!!!). Let’s see how it compares to the rest of the lineup and it’s competitors in this review.

The Fitbit Zip is the cheapest Fitbit device on the market today. At just $59.99, it’s the cheapest tracker I’ve reviewed, and it’s also one of the most colorful. Interestingly, there’s another tracker by Fitbit at the exact same price – the Fitbit Flex 2, except worn on the wrist. It also benefits from having sleep tracking features, but it doesn’t have a screen like the one present on the Fitbit Zip. The Fitbit Zip is worlds away from the fancy wrist worn trackers which can set you back hundreds more, like the Fitbit Blaze and Surge, both in price and features. The Fitbit Zip costs just $59.99, and has only two features – track and calorie counting.

The Fitbit Zip bears a striking resemblance to the pedometer, so much so that I expected it to tick as I shook it. It comes in a variety of different colours (Charcoal, Magenta, Lime), and has a handy clip to attach to any piece of clothing. It’s construction is rather interesting, with a non-rechargeable battery, inside the main device, and a plastic clip that attaches to the device. This is reminiscent of many wrist trackers, but I haven’t seen it so often on the clip-based trackers.

The Fitbit Zip’s main unique selling point is it’s size, as it’s absolutely tiny in comparison to the wrist trackers we see today, and is a lot more out of the way compared to those too. It’s deceptively simple to use – all you have to do to use it is tap the front of the device to display your step count. Overall, the FitBit zip is a well-designed activity tracker, with a non-replaceable (6-month) battery and small screen.

The Fitbit Zip is a simple $59.99 tracker, and as such, It’s not the more feature-rich device out there. It’s list of features is limited to just step and calorie counting. It’s a shame that there isn’t even sleep tracking, but at $59.99, it’s excusable. Unlike the other $59.99 tracker Fitbit makes, the Fitbit Zip has a small screen at the front, which displays both the step and calorie count. Other than that, the Fitbit Zip doesn’t have any extra features, though obviously it’s able to sync with your iOS or Android device. The Fitbit Zip has a trick up it’s sleeve though – it’s battery can last a whopping 6 months on a single charge. This is unparalleled by any Fitbit tracker out there on the market today, even the Fitbit Flex 2. Overall, the Fitbit Zip is an affordable tracker with less features than the average wrist worn tracker.

The Fitbit Zip is shaped almost exactly the same as a normal pedometer, and tracking accuracy is largely the same. The main difference between the Fitbit Zip and a normal pedometer is the fact that it syncs with the Fitbit app for iOS and Android. Syncing is automatic for mobile phones, but requires an active internet connection and bluetooth, whereas syncing to a computer requires the USB port and an active internet connection. Syncing to a computer is slightly different in the way that it’s not automatic, you’ll need to physically connect the Fitbit Zip to your computer through a USB connection. The Fitbit App itself is excellent on both iOS and Android. It’s the best tracking companion app out there, and it goes to show why Fitbit is so popular.

Unfortunately, the Fitbit App isn’t compatible with Apple Health, but I’m not sure why you’d want it to be either – the Fitbit app does everything Apple Health does and more. Still, it’d be a nice feature to have if you had, say, an Apple Watch and wanted to see your information as a complication. Overall, the Fitbit App is awesome, and the Fitbit Zip tracks accurately and efficiently.

One of the standout features of the Fitbit Zip is the fact that it has a 6 month battery life. This is unmatched by any other Fitbit tracker available today, but in practice, it can be less. Depending on how frequently you tap the screen to display the step and calorie count, it could get you anywhere from 4-6 months of usage. The screen is a great addition, but while it isn’t a fancy IPS or AMOLED display, it still drains the battery on the Fitbit Zip much quicker than without a screen. Luckily, while the battery isn’t rechargeable, replacements are dirt cheap – you can find multi-packs for less than $10, which will last you years.

The Fitbit Zip, like most other Fitbit Trackers, is water resistant. The official line is that it’s “sweat, rain and splash proof”, which should cover you for the majority of activities you would want to track. Unfortunately, it’s not completely waterproof, so you can’t take it swimming or in the shower. Similar to most trackers, it’s able to take the occasional splash, but I wouldn’t recommend actively placing it in or around water.

The Fitbit Zip looks almost the same as the lowly pedometer. However, that doesn’t stop it from customisable. The Fitbit Zip itself only comes in two color options – Charcoal and Magenta, but you can purchase extra clips which change the color. You can buy the clips in Charcoal, Magenta, Lime, and Midnight blue. Personally, i’d opt for the stock Charcoal tracker with a charcoal clip in the interests of discreetness, but if you’re proud of your tracker, you can go for a magenta or lime combo instead.

Being a clip tracker, the Fitbit Zip is an incredibly versatile device. Fitbit recommends that you clip it to a belt, pocket, waistband or bra, but you can pretty much clip it anywhere that isn’t on your limbs. Since it’s so small and clips almost anywhere, it’s supremely comfortable. You almost don’t feel it if you clip it to a secure place, and it’s tiny, so it doesn’t add any bulk at all. Overall, it’s a very comfortable device, and it’s unobtrusive to use and clip/unclip.

The Fitbit Zip is the cheapest tracker in the Fitbit lineup, at $59, but it’s low price doesn’t necessarily mean that it has good value for money. Yes, it’s the cheapest tracker you can buy from Fitbit, but it’s tied with another tracker from Fitbit – the Flex 2. Aside from the display, the Flex 2 retains many of the same features as the Fitbit Zip, and has some features the Zip doesn’t have, including sleep tracking. In my opinion, the Flex 2 represents greater value for money, even though it’s a little more obtrusive, as a wrist-worn tracker as opposed to a clip-on one. Overall, it’s still good value for money, being one of the two cheapest ways to get into the Fitbit ecosystem and apps, but it’s not the best tracker you can get for the price.

Overall, the Fitbit Zip is an excellent tracker at an excellent price. It’s the most affordable way to get into the Fitbit ecosystem, and it’s a respectable tracker in it’s own right. It’s an older tracker now, so it doesn’t have a heap of features, but it’s a simple to use tracker with a low price tag and a 6-month battery life. If you can put up with putting a tracker on your wrist and a much shorter battery life, try the Fitbit Flex 2 instead, but if you just want a simple smartphone connected pedometer, the Fitbit Zip is a great buy.