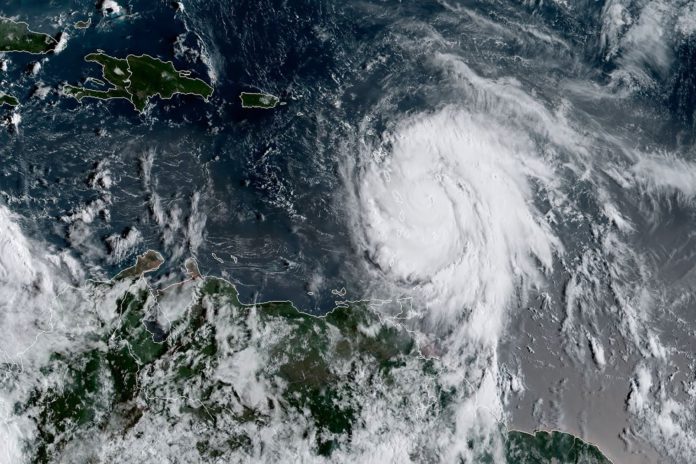 Hurricane Maria continues gaining strength and is now a category five storm. Maria, which comes during a hurricane season that has left many dead and billions of dollars in damages, was recently a category three storm.

The hurricane is now near the island of Dominica and reports say the storm has already damaged a number of homes. The Prime Minister of Dominica was giving live updates via Facebook when he revealed that the storm had ripped off the roof of his home. Reports say the home is now flooded but that he has been rescued.

The category five hurricane has winds of up to 160 mph. The storm is moving in a similar direction to hurricane Irma, which left destruction along many islands and Florida. Islands near Dominica are now on high alert and some have already ordered evacuations.

The islands that could be struck by the hurricane are currently recovering from hurricane Irma, which was one of the most powerful storms in history. The category five hurricane left more than 35 people dead and hundreds more injured.

Hurricane Maria has gained strength at a stunning pace. The US National Hurricane Center upgraded the storm from category two to five in just a few hours. Maria was a tropical storm less than two days ago.

Hurricane Maria made landfall in Dominica just a few minutes ago. Schools, ports and airports have all been closed in the island and other islands nearby. The storm could strike Puerto Rico and other Caribbean islands soon.

Hurricane Maria comes just days after hurricane Irma, Katia and Jose were all gaining strength. The most destructive of the three was Irma but the quick gain of strength by Maria has given little time for the Caribbean islands to recover. The storm has been described as potentially catastrophic after reaching category five in a little over a day.