The 24-year-old Instagram model offers lifestyle and fitness advice on various social media sites, but Jen Selter is most well known for her extra large… well, let’s just say she would fit right in with the background dancers in the video for Sir Mix a Lot’s magnum opus, Baby Got Back. This fact gained the model lots of fans, followers, and most importantly, media attention. This earned Jen an agent, and the nickname “the next Jillian Micheal’s.”

How Jen Selter Got Famous

Jennifer Leigh Selter was born in NYC on August 8th, 1993 to Jill and Todd Selter. She has less famous siblings – an older sibling named Stephanie and a step-brother named Jacob. They presumably do not share her, er… assets. She loved sports in high school, and she kept up with her appearance. Her parents allowed Jen to get a nose job at just 15. I wonder if she knew then that she was destined for social media fame.

Jen Selter insists that she never expected to become so famous, although it’s hard not to gain popularity when your bottom is trending on Twitter. In 2012, the model worked at the front desk of a local gym. She took that experience of seeing dedicated people coming in every day to work on themselves, no matter the weather, and used it to gain inspiration. She was there long enough to see how their bodies were changing and shrinking and becoming stronger. She worked on her body along with them and saw some striking changes. Jen developed abs and created her signature posterior.

One day, Jen Selter posted a pic of her bottom half while wearing a bikini on Twitter. Just a typical day at work at the gym, but this day she and her butt went viral, and a new word was conceived – belfie, or butt selfie. She gained quite a large following on her social media pages and gained an agent, endorsement deals, and public appearances in the process. She signed up with The Legacy Agency. She began offering fitness videos on social media, as well as doing them on television shows. The aim was to help people get healthy and give them a goal to focus on – namely, her butt.

Since then, the model has grown her social media empire to over 2.8 million Instagram followers, 1.1 million Twitter followers, and 9.1 million

When Jen was just 15 years old, her mother allowed her to get a nose job after she had been ruthlessly cyberbullied over the size of her nose. Even though she attempted to wear skimpier outfits to draw attention away from her face, nothing worked. One especially mean person on Facebook told her that she resembled a pelican.  Jen Selter went through numerous therapy visits to determine that she was ready, and then she went through with it. The nose job was so controversial at the time that she was featured in a story in People magazine about Teenage Plastic Surgery in 2010.

Not everyone has been thrilled with the concept of a “belfie” or with the fitness star exercising in bikinis. Read the comment section of any of Jen Selter’s social media pages with caution.

According to TMZ, Jen is currently single. She was previously dating the singer James Maslow of Big Time Rush in April of 2017. Before that, she has been pursued by sports stars  Evander Kane and Clint Frazier on Instagram, although she did not appear to respond. 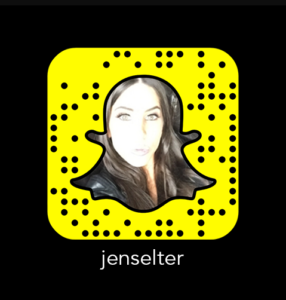 Jen Selter wisely does not have her personal profile set as public, but you can get lots of bootilicious content by clicking here. The fitness star has over 9.1 million likes and 9.0 million followers on her official Facebook page. There’s a bunch of professional photos of Jen posed in various fancy places such as a gigantic pool or a hotel balcony. She often uses the platform to promote her various brand endorsements, such as Completely Bare Products and GymLooks.

Jen Selter has an impressive 11.4 million followers on her Instagram page. It seems like most of her pics that she posts on the rest of her social media pages originate on the photo-sharing platform. Some highlights include an adorable photo of Jen on a gigantic flamingo float, Jen striking a warrior pose in the middle of a sidewalk in Mexico City, and Jen looking pensive and naked in a kiddie pool with an inspirational quote on it. Occasionally, she will go back to her roots and post a gym selfie. You can follow her and get all this amazing content on your feed by clicking here.

What is Jen Selter’s Kik Username or Code?

It appears that Jen does not have a public username for the messenger app Kik, but most celebrities do not allow fans that much access to themselves.

It does not look like Jen Selter has a Youtube channel, although there is a channel called BarbieStyle that has many of her workouts. Just click on the link for videos on Jen’s official Facebook page. Here, you can find many workout videos that you can follow along to, and increase the size of your own butt, or simply get in shape. The exercises range from simple squats to jumping to increasingly higher benches, so some are more accessible to non-fitness goddesses than others. For your viewing pleasure, just click here to be directed to the Facebook video page.