Kylie Jenner Snapchat Name – What is Her Snapchat Username & Snapcode?

Kylie Jenner, much like her family, is well-known for a lot of things ranging from being a reality TV star to a highly-successful entrepreneur. Read on and find out more about her career and her online whereabouts:

The Rise of Kylie Jenner

Kylie Kristen Jenner was born on August 10, 1997, in Los Angeles, California. She actively participated in plays and was part of the cheerleading team. Jenner then enrolled in a homebased education program in 2012 and earned her diploma three years later.

At the age of ten, Jenner made appearances along with her family in the reality series Keeping Up with the Kardashians. She also guested in the show’s numerous other spin-offs involving her siblings. Moreover, Jenner experienced hosting during the red carpet premieres of Glee: The 3D Concert Movie and The Vow in 2011 and 2012 respectively. Also, she began her modeling career by appearing at the “Crush Your Style” clothing line of Sears.

Jenner then began to put her entrepreneurial skills to good use in tandem with Kendall. In 2013, the sisters launched The Kendall & Kylie Collection fashion line with Pacific Sunwear, followed shortly by the jewelry collection Metal Heaven by Kendall & Kylie with Pascal Mouawad’s Glamhouse. Additionally, they launched a handbag and shoe line for Steve Madden and the clothing line Kendall + Kylie for Topshop. The pair also ventured in literature by co-authoring the sci-fi novel Rebels: The City of Indra which was met with lukewarm reviews and criticized for being ghostwritten by Maya Sloan. The book had a sequel titled Time of the Twins which was also co-authored by the pair, although some suspect that it was written by a different ghostwriter.

Jenner worked on her individual brand by releasing the Kylie Hair Kouture hair extension line for Bellami Hair in 2014. The following year, she released her official mobile app and launched makeup brand Kylie Cosmetics. In 2017, the KoKo cosmetics set collection was included in her brand, made in partnership with her sister Khloe Kardashian. For her efforts, Jenner was ranked at number 59 on the annual Forbes Celebrity 100 list after earning $41 million during the last 12 months.

On August 06, 2017, the pilot episode of reality series Life of Kylie was aired. The show provides a closer look at Jenner’s personal life and her entrepreneurial ventures. She also released the Quay x Kylie line of sunglasses with Quay Australia. 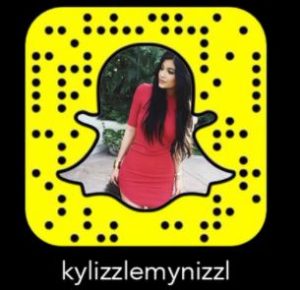 Jenner frequently snaps funny videos, behind-the-scenes selfies, and her makeup and outfits. It was hacked last July 24, 2017, with the hacker threatening to release her provocative pictures. Eventually, the culprit admitted that the account had no such images. Click here to add Jenner to your Snapchat.

Kylie Jenner Kik Username or Code – As for now, Jenner does not have an account on Kik. We will update this page if she ever decides to create one. Be wary of those that claim to be her, for such accounts are most probably fan made.