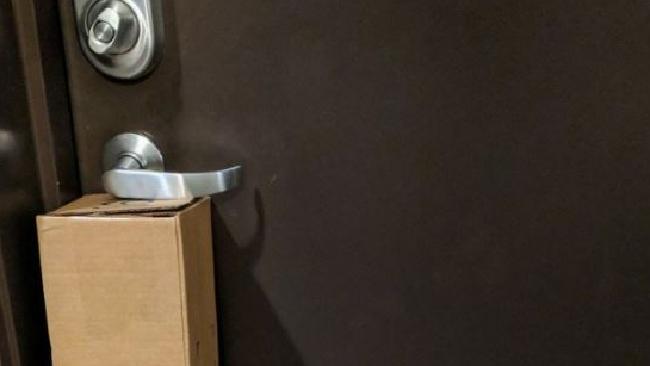 Jessie Lawrence made an Amazon order and it arrived without any problems. But actually getting the package became a huge problem when it prevented him from opening the door.

The long Amazon package delivered by UPS was placed so tightly under his doorknob that it would not allow him to open the door. The tall cardboard box left him with just one option, to contact maintenance so that they could help him get the package out.

The image, posted on Twitter on Sunday, was liked and retweeted by thousands of people. The image was so popular on Twitter that the amount of notifications would crash the Twitter app on his phone.

The package being placed under a doorknob and trapping someone inside a house may not be a big deal since houses have windows but Lawrence said on social media that this could have been worse. That’s because he lives in an apartment on a fifth floor, with the only way out being the door that was jammed by the package. He says that under an emergency they would have had little chance since they’re five floors up.

Lawrence contacted UPS on Twitter when he was trapped inside his apartment but they didn’t seem to know what was going on. Their response asked Lawrence to send him the details of his concern through a direct message. That tweet also received hundreds of responses by other users and thousands of likes and retweets.