Russell Westbrook is probably one of the more promising basketball players in the NBA right now. He’s only been in playing professionally since 2008, but since then, he has had a very accomplished career. Just last season, he was named the NBA’s Most Valuable Player, which is obviously a very prestigious accomplishment. Westbrook has played with the Oklahoma City Thunder through his whole career, and he has found many fans in Oklahoma City, as well as around the entire country. These fans are known to show their support for Russell on social networks like Facebook, Instagram, Twitter, Snapchat, and more. Sometimes, Westbrook will even use these networks to directly interact with his fans.

Russell Westbrook was born in November of 1988 in Long Beach, California. Westbrook was really into basketball at a young age, and he used to dream of playing college basketball with UCLA. He entered basketball at Leuzinger High School as an undersized point guard, and he wasn’t really able to start playing on the varsity team until he was in his junior year. However, he played pretty well during his senior year, partially because he grew to his full adult height during that prior summer. He was considered a 3-4 star prospect by most scouts, which isn’t too bad. Russell was able to ultimately achieve his dream when, beginning in 2006, he started to play collegiate basketball for UCLA. His first year with the college, he was plagued with injury and he couldn’t really get a full season in. However, his next season was different. 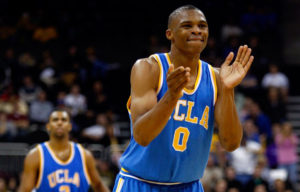 Westbrook was a starter during that year, and he really blew people away. He was named the Pac-10 Defensive Player of the Year, which was remarkable considering his relative lack of collegiate experience. He left UCLA after that season to enter the 2008 NBA Draft, where he selected with the fourth overall pick by the Seattle SuperSonics. (Literal days later, the SuperSonics would relocate to Oklahoma City and become the Thunder.) During his earliest seasons, Westbrook was able to make a real impact on his team. Just in his second season with the Thunder, Westbrook helped pull the team to the playoffs. They were eliminated in the first round, but it was a symbolic victory. This small accomplishment was a sign of the huge things to come in Oklahoma City in the ensuing years.

In the following season, Westbrook was named an NBA All-Star for the first time. Since he first helped the Thunder to the playoffs in 2010, Russell has been able to repeat his success in the 2011, 2012, 2013, 2014, 2016, and 2017 seasons. Although the Thunder have yet to win an NBA Championship with Russell Westbrook and company, they have come really, really close, and it’s probably only a matter of time before the team is able to win “the big one”. Russell has accumulated plenty of individual accolades in his NBA career, however. He is a two time NBA scoring champion, a two time NBA All-Star Game MVP, and a six time NBA All-Star. And like I mentioned before, last season he was named the NBA Most Valuable Player. If you’re a fan of the Oklahoma City Thunder, I’m sure you’re encouraged by the fact that your team is being led by a man as talented as Russell Westbrook. 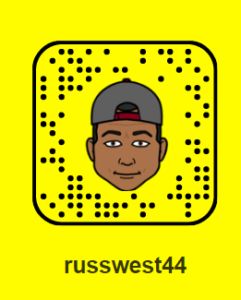 Russell Westbrook has been on Snapchat for a while now, and he’s known to use it pretty often, especially during the offseason. If you’re a fan of Westbrook, then I highly recommend that you add him on Snapchat. You can do so in a couple of ways. First, you obviously have the option of just searching for him through his username, which is russwest44. Aside from that, you can also scan his Snapcode using the Snapchat app. (I’ve included an image of Russell Westbrook’s Snapcode above for your convenience.) If both of those are too complicated for you, then you can also just click the link that I’ve provided right here.

Russell Westbrook has a Facebook page! He’s a really popular athlete around the world, so it isn’t surprising that he would have an official, verified Facebook page to keep in touch with his fans. You can find Russell Westbrook’s Facebook page through his username, which is @russellwestbrook. Of course, you can also just click the link right here and be taken directly to his page.

Russell Westbrook has been on Twitter since April of 2009, and since he first created his account he was able to acquire over 4 million followers. Do you want to join those followers? You can, assuming you have a Twitter account, of course. Russell Westbrook’s official, verified Twitter handle is @russwest44, and I invite you to take a look at what kind of stuff he shares with his followers by clicking the link here.

Although Russell Westbrook has found a lot of support on social networks like Twitter and Facebook, by far the majority of his fans can be found on Instagram. As of this writing, he has over 8.5 million followers on Instagram. You’re able to find Russell Westbrook on Instagram as @russwest, and you can also take a look at his account by simply clicking the link here.

Kik is a really popular messaging application, and I’m sure there are plenty of people reading this who use it on the regular. You might think that, since it’s so popular, Russell Westbrook can be counted among its users. That’s a pretty astute assumption, but unfortunately, it doesn’t seem to be true. As of this writing, Westbrook has yet to share any information regarding a Kik account with any of his fans. So that means that if he does have a Kik account, he probably is intending to keep it private.