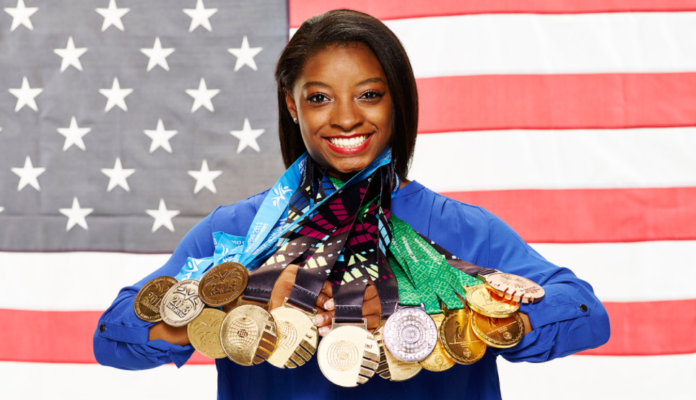 Simone Biles, at only 20 years old and with only a single Olympic appearance, is the most decorated American gymnast in history. She has earned 16 championship gold medals, two silver, and three bronze medals since she started competing in 2013, and she took home four golds at the 2016 Rio Olympics. If she retired today, she might do so as the greatest American of all time. With her youth and health, though, she could replicate her performance from 2013 to now over the next four years and put any questions of her place in history to rest forever.

Simone Biles started doing gymnastics at age six. She was encouraged to stick with it after trying it at a daycare field trip and taking to it quickly. Before long she was training competitively with coach Aimee Boorman.

You might think a competitor as dominant as Biles is would have dominated throughout the ranks, but she didn’t. She debuted as a junior in 2011 and finished third and 20th all around in her two events. In 2012, she quit public school and started homeschooling, allowing her the time to train another 12 hours a week. She placed first in the all-around at the US Classic and third at the National Championships, with a first on vault for good measure. All of these were fine performances, but they didn’t give any hints to the level of domination she would produce in later years.

Biles debuted as a senior in 2013, and her first event was the American Cup. She led the event for a good stretch before a fall off the beam dropped her to second place. In her second event, she finished first in the overall, vault, balance beam, and floor exercise, then won three events in her third competition while finishing second overall. These dominant performances were followed by a poor performance at the US Classic, then a rebound at the Nationa Championships, where she won all silvers in individual events and the gold in the all-around. Finally came her first World Championships, where she took on gold in the floor exercise, silver in the vault, and gold in the all-around.

Biles would follow up a strong 2013 with a stronger 2014, even after taking off the beginning of the year to recover from a shoulder injury. She dominated the competition in all events but the vault, where she took silver and repeated as world champion. In 2015 she would repeat as world champion yet again, leading the US to yet another team title, and struggling most with the vault yet again as she only earned a bronze medal in that event.

2016 was the year of the Rio Olympics, and Biles was expected to help the team achieve repeat as team gold medalists after their triumph in the 2012 Olympics. The five-woman team of Biles, Gabby Douglas, Aly Raisman, Madison Kocian, and Laurie Hernandez had all achieved at a high level, with Gabby Douglas being the defending Olympic overall champion. Gabby wouldn’t get to defend her title, as she finished third in the preliminaries behind Biles and Raisman, and only two members of a team were allowed to advance. IN the end, the Americans repeated team champions and Biles took the gold in the all-around, vault, and floor exercise while adding a bronze on the balance beam. The overall title made her only the fourth woman to win every world title during a four-year cycle.

After an intense Olympics and four years of constant work toward that goal, Biles decided to take the entire year 2017 off. Her plan was to return full-time to training and competing in 2018. In a result that’s not too surprising for a fierce competitor like her, she ended up resuming training early by the end of August. During her down time, she competed in the popular television show “Dancing With The Stars.” She and her partner, Sasha Farber, finished fourth in the competition, to the disappointment of many fans who thought she was robbed. 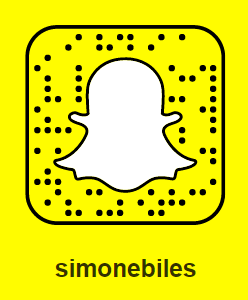 If you want to catch Simone in action, then feel free to flip for joy, because you can add her on Snapchat here or use the snapcode above.