Sophia Bush Snapchat Name- What is Her Username & Snapcode?

Sophia Bush an American director, activist, and actress who is most well known for her role as Brooke Davis on the popular WB series One Tree Hill. She has been involved in a number of political and social issues and has even won awards for her activism.

How Sophia Bush Got Famous

The One Tree Hill actress was born Sophia Anne Bush on July 8, 1982, in Pasadena California. She was an only child of artists. Her mother ran a photography studio while her father was a photographer for advertising and models. She graduated high school in 2000 from the Westridge School for Girls. Since being in the theater arts program was a requirement for the school, Sophia reluctantly got into acting. She was a sporty girl and thought that it detracted from her playing volleyball, but she instantly warmed up to the stage. The stage loved her back. When Sophia was just 17, she was crowned the Tournament of Roses Parade Queen in her hometown of Pasadena.

Two years after she graduated, Sophia Bush got her first leading role opposite Ryan Reynolds in National Lampoon’s Van Wilder. When that gained her attention, she moved on to a couple different television series such as Sabrina the Teenage Witch and Nip/Tuck.

Perhaps it was better for Sophia that she did not keep that role. It freed her up to play Brooke Davis in the popular WB series One Tree Hill. The fame from that television show, which she was on for many years, allowed her to model for mainstream magazines such as Maxim, Entertainment Weekly, Lucky, and Zooey Magazine. Being endorsement deals that she and her coworkers were able to get were far ranging from Cingular Wireless to MasterCard, and also for the Chevy Cobalt. She ended up being able to direct a few of the episodes.

Although Sophia Bush has been honored on many “Sexiest Women of all Times” lists, she offers more to the world than just her looks or even her acting talent. Sophia immerses herself in activism. She has used her beauty and her fame to stand up for people that may not be able to stand up for themselves. She uses her social media accounts as a platform for social justice and helps raise money for great causes like Global Green Gulf Relief, F*ck Cancer, and the Human Rights Campaign. She even pledged to live on just $1.50 a day for the Live Below the Line campaign, which helps to raise awareness of world poverty.

Sophia Bush’s first marriage to her One Tree Hill co-star Michael Murray did not last even half a year before they announced their separation – their engagement was longer than that. Still, years later, Sophia ended up dating more One Tree Hill co-stars as well. When those relationships did not last, Sophia moved on to a business type – a program manager for Google, Dan Fredinburg. They ended it a year before his death in the spring of 2015. It seems like Sophia has been in an on-again off-again relationship with her Chicago PD co-star Jesse Lee Soffer. 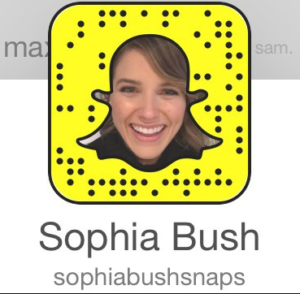 While it does not appear that Sophia Bush has a personal Facebook profile, she does have a Facebook fan page followed by 800,000 of her fans. You can follow her too by clicking here. She does not post often, but when she does, the posts are often political in nature. Most recently, Sophia has posted about Teva Women’s Health, and Fashion Kind. Occasionally she posts candids of herself meditating in an effort to promote the idea of mindfulness – as well as her brand promotion with Listerine.

You can find Sophia Bush on Instagram under the name sophiabush, where she describes herself as a “Storyteller. Activist. Technerd.” and “Obesessed with dogs and interiors.” Many photos show Sophia in gorgeous locations such as the glaciers of Alaska, or in a field in Nashville watching the eclipse. She also posted a tribute to the recently deceased Dick Gregory, inspirational quotes, and political/social justice themed infographics. You can follow her by clicking here.

You can find Sophia Bush on Twitter by clicking here. She has 1.35 million followers on the microblogging platform. She is much more active her than she is on Facebook. Recently, she has been using the space to spread information about relief efforts for Hurricane Harvey, and encourage her fans to contribute in whatever way they can to the victims of the natural disaster. She’s also spoken out about her feelings about President Trump’s latest political gaffs, and against the white supremacist rally in North Carolina.

What is Sophia Bush’s Kik Username or Code?

Sophia Bush does not have a Kik Username, or at least not a public one.

While Sophia Bush does not have her own official YouTube channel, you can still find plenty of content. There are many videos featuring Sophia on talk shows, as well as clips from One Tree Hill and Chicago P.D.