Anais Gallager is most well known for being the daughter of rock legend Noel Gallager of the 90’s band, Oasis. As Anais herself describes, she was once famous for no reason besides her famous father. Now, she is starting to come into her own for her modeling contracts and her photography.

How Anais Gallagher Got Famous

Anais was born in London England on January, 27hth 2000 to Noel Gallagher and Meg Matthews. He uncle is, of course, Liam Gallagher, the other more contentious member of Oasis. She is an only child, but she was raised around her cousins Gene, Lennon, Molly and Gemma Gallagher. She has said that she’s had a largely normal childhood, but she also grew up around famous people like Kate Moss and the children of her father’s famous friends.

Anais was born in London England on January, 27hth 2000 to Noel Gallagher and Meg Matthews. He uncle is, of course, Liam Gallagher, the other more contentious member of Oasis. She is an only child, but she was raised around her cousins Gene, Lennon, Molly and Gemma Gallagher. She has said that she’s had a largely normal childhood, but she also grew up around famous people like Kate Moss and the children of her father’s famous friends.

When she went to school, Anais had a group of friends who wore clothing inspired by the nineteen-nineties such as the standard streetwear, and the older classmates had taken to wearing Reeboks. Anais was infatuated with the style. she said that her obsession eventually led to her brand deal with the athletic shoe company.

Anais had begun to be scouted for modeling by the time she was 10, according to her father. Noel said it was not something he would have chosen for her, but he was ultimately still supportive. She credits her entire career to her father, openly admitting that she would not be where she is today without his fame and the privilege that comes with it. She has a modeling contract with Select Model Management.

In 2017, Anais was chosen to be the brand Ambassador for Reebok. She thinks it’s a natural choice, considering how much she loves the shoes. She does all the modeling work for their AW17 collection. She has also walked the runway in Milan for Dolce & Golbana and has attended Londen’s Fashion Week.

In fall of 2017, Gene Gallagher, son of Liam Gallagher, recently took to Twitter to sound off about his cousin. He said that she resembles her father in a blonde wig, and implied that she only has the job because of her dad’s fame. Since Anais openly admits that she is lucky enough to be a brand ambassador and a catwalk model for exactly those reason, the attack seems to be pointless.

The young model and photographer has only been public with one relationship. Anais Gallagher and Reece Bibby were dating from 2015 to 2016, but unfortunately, the connection ended. 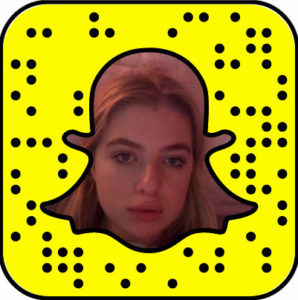 The 16-year-old does not appear to have a public personal Facebook profile or an official Facebook page. There is an account under the username anaisgallagher1 that claims to be the model, but it does not have the official blue checkmark. That profile has not been updated in over a year, and all the posts are made in the third person. It does have some interesting content – photos of Anais with her with her famous father, Noel Gallagher, as well as pics of her at fashion shows. You can follow the page here, and get access to that content as well as Anais’ photos and Vine videos.

She joined the microblogging website in February of 2014 and has gathered 23.8K followers since then. Anais uses the platform to communicate with fans, and post daily inspirational quotes. In fall of 2017, she asks her followers if anyone would grab dinner with her in NYC. She didn’t retweet any responses, but she did post a selfie of herself in front of a Picasso painting at the NYC Museum of Modern Art. Anais interestingly retweets a post that states “Anais Gallagher is so f***ing cringe,” and comments that she proudly holds the title of “Queen of Cringe.” The daughter of the Oasis singer also uses her Twitter as a platform to promote causes she believes in like animal welfare and gun control.

This British photographer has an Instagram page with 121,000 followers, which you can join up with by clicking here. Her content mostly consists of memes that are sparsely interspersed with selfies, and occasional samples of her photography. Many of her photos are in black and white, and the rest of her page gives you a good idea of what her aesthetic and inspiration are. Anais also clearly loves inspirational quotes, both by famous authors like Roahl Dahl, and anonymous words on a yellow background – they make up a good 100 out of 395 posts.

What is Anais Gallagher’s Kik Username or Code?

Like most famous people, Anais does not have a belong to the Kik messenger community, or at least she does not share her username publically.

Anais Gallagher seems to have an old Youtube account that she forgot to delete. It has two grainy videos with the same name that features Anais with a friend named Harvey, and it seems like something a standard 13 year old would post. You can find that by clicking here. You can also find more official Anais content of the famous Oasis daughter at awards shows and red carpet events by searching her name in the Youtube search bar.