Charlie Lenehan Snapchat Name- What is His Snapchat Username & Snapcode?

Charlie Lenehan is most well known for being a singer on Youtube with his music group mate, Leondre Devries. The pair, who met on Facebook in 2013 when they were only 14, makes up the musical duo Bars and Melody. Leondre, or “Bars”, is the rapper of the duo, and Charlie, or “Melody”, is the singer. Together, they were able to get to the third place on the competition reality show Britain’s Got Talent.

How Charlie Lenehan Got Famous

Charlie was born on October 27, 1998, in Frampton Cotterell.

His mom, Karen James, is a cook at various different schools in Thornberry while his stepfather is a businessman. Charlie also has two younger siblings, a brother Joel, and his sister Brooke. When Charlie was just 11, he decided to take up singing when he was invited to be in a band with a couple classmates. He attended the Winterbourne International Academy, which is a school on the outskirts of Bristol England which offers college prep classes. It was there that Charlie got into drama, engineering, as well as music.

Once he got into singing, Charlie started uploading videos of himself singing cover songs on YouTube. His bandmate Devries discovered him on the video sharing platform and then contacted him on Facebook in September 2013. Not long after, the pair decided to meet in person in January 2014, and forms of the musical duo. They called themselves Bars and Melody since Charlie was the singer of the group, and his partner rapped.

The pair decided to audition for the eighth season of Britain’s got talent in Manchester England. The tryouts were on February 8, 2014. They did a partial cover song of Hope by Faith Evans and Twista, where Bars replace the rap lines with anti-bullying lines that he composed themselves.The judges were so impressed that even Simon Cowell sent them straight through to the semifinals, by pressing a not often used golden buzzer.

Before they even made it to the semifinals, Bars and Melody performed on the Ellen DeGeneres Show in the United States of America to the loud cheers of their young fans. On May 29, 2014, the Britain’s Got Talent semifinals were finally here. The boys performed a cover of the famous 1997 song I’ll Be Missing You by Puff Daddy and Faith Evans. Like the first time they performed, they ended up replacing some of the verses with their own writings, making it more relatable to fans. It was a fantastic performance as the audience members had candles that they waived during the show. Charlie Lenehan and his partner were able to win the semifinal to progress to Britain’s Got Talent final.

In the finale, Bars and Melody were able to secure third place. Even though they didn’t get first place, they were able to sign a record deal for 500,000 pounds with Syco, which is Simon Cowell’s record label. This opened a lot of opportunities for Charlie Lenihan and Leondre. They ended up releasing Hopeful as their single and went on various British television shows in order to promote it. This led to their first tour, the release of the second single, as well as a full-length album. Their album went platinum in Poland.

In 2017, Charlie Lenehan and Bars and Melody released their second Japanese album called to Never Give up, and also released an another album called Generations Z in September 2017. Recently, Bars and Melody also opened for the dance troupe Diversity which toured 10 cities in the United Kingdom.

Charlie Lenehan was involved in a controversy with his bandmate, and his father/ musical promotor. Antonio Devries sued Bars and Melody, stating that he didn’t like the way that the kids were being treated, and asserting that he penned the tune Hopeful, and did not sign off on its use. He also said that he did not approve of the teenagers’ bad boy appearance, and was upset that Charlie and Leondre have moved away from their anti-bullying message. Bars and Melody hired a spokesperson to explain that they were just fine, and they hoped the whole thing would go away soon.

Even though Charlie is still young, and is balancing a music career with making new albums and touring, he still has the time for a long-term relationship. He is currently dating Chloe Lindsay, an Instagram star that gained popularity after the relationship started. They began seeing each other in 2015. 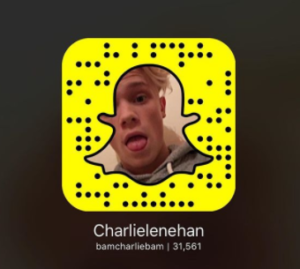 Catch up with Charlie on Facebook by clicking here. He does not have an official blue check mark on the page yet, but maybe he hasn’t sought it out yet.  He has 57,906 followers and joined the social media platform in 2013. Charlie uses the page to show fans photos of the shows and updates on tour dates and tickets. He also occasionally posts candids, sometimes with friends, or his puppy.

It’s not clear if Charlie has his own Twitter handle, but you can find him and Leondre at the official Bars and Melody Twitter page. They have 717,000 followers, and you can join them by clicking here. The main focus of the page is the band, and their tour. The boys occasionally post selfies, and engage with their fans.

What is Charlie Lenehan’s Kik Username or Code?

As with most celebrities, Charlie does not have a public account on the Kik messenger app.

There are several accounts that claim to be the Charlie Lenehan from Bars and Melody, but none of them actually seem legit. You can still find all your favorite Bars and Melody videos by searching that term on the video sharing platform.