Jordyn Jones Snapchat Name – What is Her Snapchat Username & Snapcode?

Jordyn Jones is renowned for her incredible skills in dancing and rapping. Her videos on YouTube have gathered millions of views from fans all over the globe who enjoy her high-energy moves and rhymes. Read on and find out more about her rise to fame and her online whereabouts.

Jordyn Kaylee-Marie Jones was born in Kalamazoo, Michigan, on March 13, 2000. She developed an interest in dancing and singing throughout her childhood, and her incredibly supportive parents helped her mold these talents. She also participated in several dancing competitions where she got her first bits of exposure.

Around the age of 12, Jones and her mother relocated to Los Angeles in a bid to join the entertainment industry. This led to her joining the first season of the Lifetime reality show Abby’s Ultimate Dance Competition. After a series of ups and downs in the competition, Jones managed to finish at fifth place. It was enough to land her as a backup dancer on a wide variety of shows such as Dancing with the Stars, The X-Factor, and the Kids’ Choice Awards. Moreover, she got into more dancing gigs on television with the aid of Reload Music Group which helped young artists with agency work.

In 2013, Jones had a taste of acting when she appeared at the “Opposites Attract It Up” episode of sitcom Shake It Up. She also became part of the all-girl group 5 Little Princesses with their song “Sugar and Spice” becoming somewhat of a hit last 2014. During the same year, Jones uploaded a cover of the Sharaya J single “Banji” on YouTube where she exhibited her hip-hop moves while rapping. It was followed shortly by her own renditions of Lil Mama’s “Lip Gloss” and Iggy Azalea’s “Fancy”, and these covers all amassed millions of views. However, the latter earned her criticism as some people pointed out that her cover lacked creativity.

Jones then began working on her original content and released her debut single “I’m Dappin” in 2015. It was followed by “Bruh!”, “Fiyacracka”, and “U Already Know” a year later. Also, in 2016, she starred in the YouTube Red original film Dance Camp and in the comedy flick Internet Famous.

In 2017, Jones uploaded her single “Summer” on YouTube. She also guested on  the talk show Piper’s Picks TV. 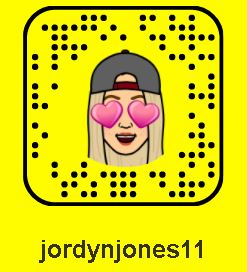 Jordyn Jones Kik Username or Code – Jones does not have an account on Kik. If she ever decides to make one, then we will update this information so make sure that you have this page bookmarked. As of now, be wary of accounts that claim to be her as they are fanmade or posers.