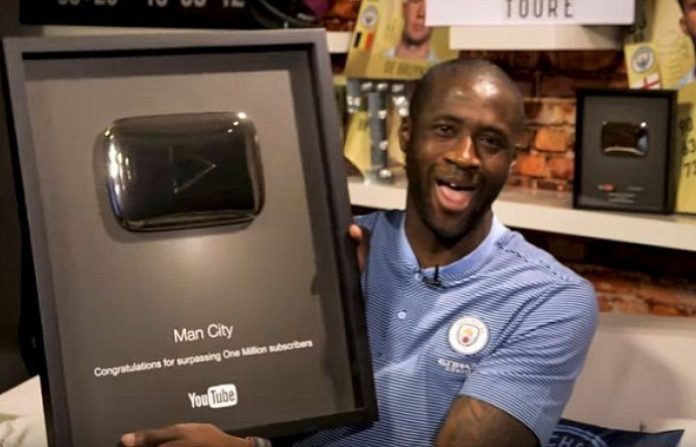 Manchester City have reached one million subscribers on YouTube, becoming the first Premier League club to do so. The club announced the achievement with a livestream featuring midfielder Yaya Toure.

Yaya Toure, who joined Manchester City from Barcelona back in 2010, has been with the club for most of its rebuilding, which has brought some of the best footballers from around the world. The plaque from YouTube has the play button logo and the clubs name, along with a congratulation for surpassing one million subscribers.

The Manchester City YouTube channel has posted 3,711 videos, with some of them getting millions of views. Michael Russell, Manchester City’s head of social media, said that when they launched the channel six years ago, they wanted to create a channel that produced original and innovative content.

There are many users with over one million subscribers on YouTube but Manchester City is the first team in the Premier League to reach that number. Its been an impressive season for Manchester City so far, the club has not only reached one million subscribers but are also in first in the league. The impressive start has them in first place with a five point lead over Manchester United and Tottenham. Just a few days ago, Sergio Aguero got closer to a historic achievement after tying the club scoring record. The Argentinian striker now needs one goal to become the highest scoring player for Manchester City.