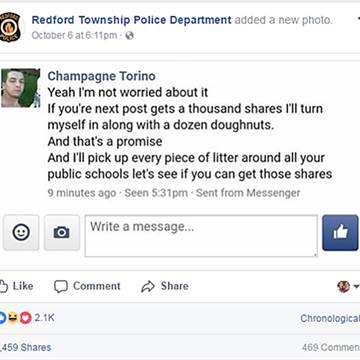 A Michigan man wanted by police decided to turn himself in after he ended up losing a challenge he set to police on Facebook. Michael Zaydel made the bet on social media and actually made good on his promise.

Zaydel promised to turn himself in if a post about an existing arrest warrant received over 1,000 shares. Zaydel didn’t seem to be too worried about the bet and even told the Redford Township Police Department (RTPD) that he would bring a dozen donuts to police officers if he lost the bet. He wrote on social media that he wasn’t worried about it and that if their next post got 1,000 shares, he would turn himself in and bring doughnuts. He appeared to be so sure about winning the bet that he even said he would pick up every piece of litter around their public schools.

Mr. Zaydel lost the bet and police confirmed on Facebook that he had turned himself in. On Monday, the Redford Township Police Department (RTPD) revealed that at 6:30 pm, Zaydel made good on his promise and turned himself in for his outstanding warrants. The police department said that he walked in on his own and that he had brought the donuts and one bagel.

The post by the police department confirming that Mr. Zaydel turned himself in has received over one thousand likes, two hundred comments and nearly 500 shares.

Police were not sure if he was a man of his word after he made the bet but they quickly found out that Mr. Zaydel was serious about it after losing. Not a bad day for these police officers as they arrested a wanted man and received donuts for winning the bet.

Jan 19, 2021
Today's smartphones are great, they can do many things and storage a lot of pictures and video. But there is one thing that many...