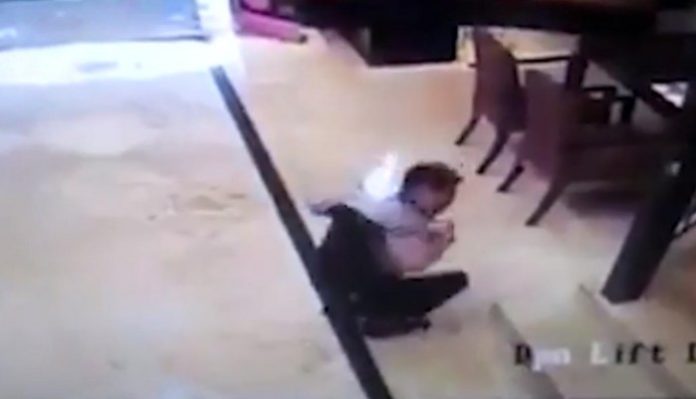 A man in Indonesia suffered a scary incident when his Samsung phone exploded in the pocket of his shirt. The explosion and fire caused him to fall as he tried to take his shirt off.

The incident was caught by a camera inside Hotel Ciputra, where the man works as a concierge supervisor. He was standing in the lobby when it all happened.

The fire isn’t the first reported from a Samsung smartphone but it happened to a Grand Duos model, which was not involved in any of the reports of fires and explosions last year.

Yulianto, the owner of the phone, was trying to reach for his phone when it went up in flames. He was quoted as saying by The Daily Mail that there was a strong sensation of heat and that he felt that something started to shake. He says before he knew what was happening there was a fire and he panicked. In the video, he is seen trying to take his shirt off since the fire spread to his shirt.

After a few scary seconds, Yulianto was able to take the shirt off with the help of a person nearby. Police said he was taken to a hospital but that he had not suffered significant injuries.

Yulianto said he had never had any problems with the phone. The incident actually happened on September 30 but the CCTV footage was recently released. Police confirmed that he was the owner of the phone and that it was a Samsung Grand Duos model.

The phone has not been part of past reports of fires and explosions but the only guess of the cause right now is overheating. Police said he was not using a portable charger when it went up in flames. Yulianto did say that he had a number of options on, including Wi-Fi and GPS.

Last year, the company reportedly lost billions of dollars because of the Galaxy Note 7 disaster. The company had to recall and replace millions of units. The replacements also had issues, forcing the company to discontinue the phablet.