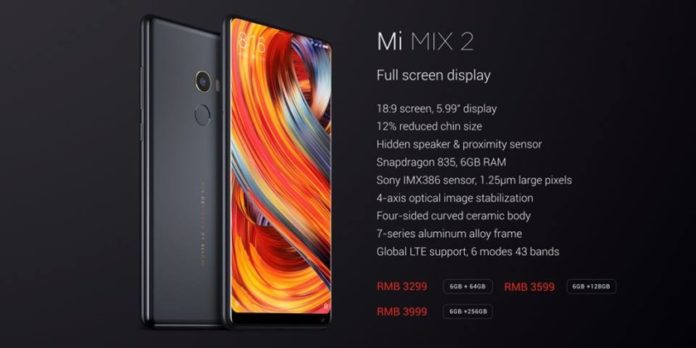 There’s good news for Xiaomi Mi Mix 2 fans in India as the launch date has been announced. It had been previously confirmed that the phone would be available in India at some point but fans now have an exact date on the launch.

Last year’s Xiaomi Mi Mix caught the attention of the world but the impressive smartphone was only released in China. Other Xiaomi markets such as India never saw a release of the popular phone. The release was also limited in China, with the company reportedly producing just 10,000 units each month. The first Mi Mix 2 sale in China lasted 58 seconds, according to GlobeMobiles. It is not known how many units Xiaomi had available for its first sale, which happened on September 15.

The smartphone was quickly sold out during its flash sales but those interested in buying the smartphone in other parts of the world were out of luck or had to pay hundreds more from other sites selling the phone. Fans in India won’t have to worry about that as the second version will be making its debut very soon.

The Xiaomi Mi Mix 2, announced early September, has already gone on sale in China, where it was released in multiple variants. It’s believed that the Mi Mix 2 will only come to India in select variants. Prices are not yet known.

The Xiaomi Mi Mix 2 will launch in New Delhi on October 10. The flagship smartphone was confirmed just four months after the release of the Mi Mix. In September, just a day before Apple’s big event, Xiaomi announced the Mi Mix 2.

The variants coming to India have not been revealed but three variants are available in China (64GB, 128GB and 256GB). There is also a limited edition with a ceramic body. That phone has 128GB of storage and 8GB of RAM.