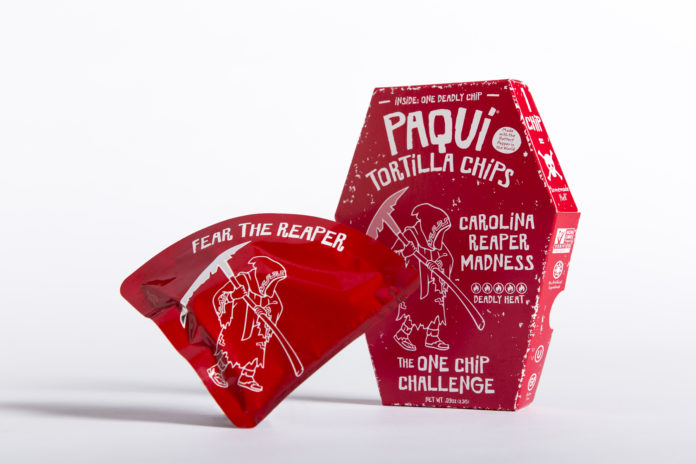 The world’s hottest chip challenge is quite popular at the moment. There are so many videos about it on YouTube and more and more people continue to try it. In recent weeks, we have seen athletes, celebrities and even news anchors try this challenge. But not all have gone perfectly since the chip is very very very hot. Here are five times that the world’s hottest chip challenge went wrong:

Shaq was unstoppable during his basketball career but the world’s hottest chip challenge made him run for milk after a few seconds. The Inside The NBA analyst bets $20 dollars that he’ll eat the chip without making a face and in the beginning, it actually looks like he’ll win the bet. After a few seconds, the basketball legend starts coughing and loses the bet. He then asks for milk and runs off the stage. Shaq was a little prepared as he had water for the challenge but he says milk was actually what calmed the effect.

Here is a video of the segment, the challenge starts at the 1:40 mark.

Last month, news anchors decided to try the challenge. The five were given the chip and they all seemed like they would complete the challenge without any problems. But KWGN anchor Natalie Tysdal quickly went from taking a selfie with the chip to looking for anything to stop the heat. Tysdal and all the news anchors weren’t prepared with milk or water. But Tysdal appeared to be the most affected by the chip, leaning over and throwing up behind the desk. A drink is later brought to the news anchors but water and maybe some milk would have been good before the challenge actually began.

She later explained on Facebook that she thought it was okay until she had a drink of her coffee.

Here is the video of him doing the challenge:

YouTube user Dougg1e has more than 270,000 views and 1,000 likes on his one chip challenge video. But he would probably think twice about making this video if he knew that the one chip was extremely hot. The video begins with him sitting next to another person who is also going to eat the chip and talking about the challenge. The two seem to be very prepared for the challenge as they are wearing gloves and have a glass of milk next to them.

Nothing happens in the first few seconds and he actually says that ain’t that hot, adding the words not yet. He then says again that it ain’t that hot and that he is good. Things change a few seconds later when the two start feeling the effects and begin drinking milk. The milk runs out and he begins drinking water from the sink and she takes out orange juice from the fridge. He then grabs bread and even puts a tissue in his mouth. He also tells people thinking about doing the challenge not to do it.

Former NFL player and sports analyst Akbar Gbajabiamila seemed very confident before attempting the one chip challenge but he quickly learned that it was no joke. His first attempt was to calm the effects with water and ice cubes brought by his kids. He also asks for bread but that doesn’t work. He takes off his sweater and continues to sweat and eat everything to stop the heat. He also advises people not to attempt the challenge. The video, which lasts 12 minutes, probably sets a new record for most drinks and foods eaten to stop the effects of the chip.

The one chip challenge has been around for quite a while now but more and more people are now learning that the world’s hottest chip is no joke. The majority of the people that have attempted it advise others not to but if you’re crazy enough to do it, remember to have a glass of milk or water nearby.