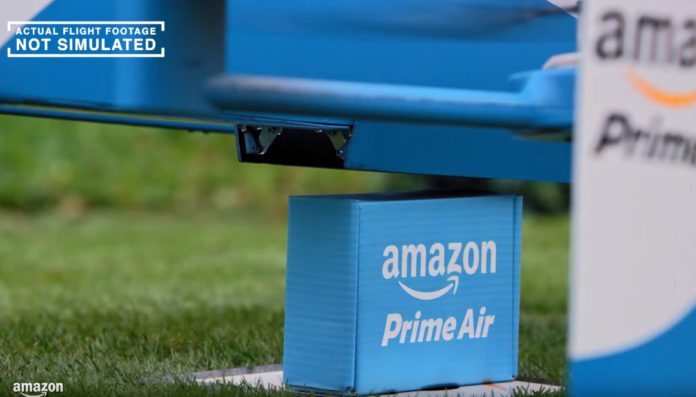 Amazon and many other companies are planning to use drones for deliveries. In recent years, companies have started testing drones and it appears that it is just a matter of time before we see drones flying and delivering packages everywhere. But Amazon might be thinking about more than just package deliveries and how fast they can reach their customers.

The online retailer is said to be working on a drone that would dismantle itself when something is about to make it crash. Drones will fly over our heads in the future, so it appears that Amazon wants to make a crash as safe as possible. On Tuesday, the US Patent and Trademark Office granted the online retailer the patent for developing a drone that will dismantle itself when it is about to crash.

Amazon has been working on drones for some time now and it has even released a video on how the technology would work. In November 2015, Amazon released a video on how Prime Air works. In the video, it’s mentioned that the drone uses sensors to avoid objects in the ground and air and scans the landing area for potential hazards. In December 2016, the company successfully tested its Prime Air drone delivery in the UK. The delivery was made in Cambridge and went to a nearby customer. The delivery was for a bag of popcorn and an Amazon Fire TV streaming stick.

The drone delivery was only open to two customers in the area. The requirements for the delivery were to live nearby, have a huge landing area and an order that weighed less than 2.6 kg (5.7 pounds). Amazon released a video of the delivery through its website and YouTube.

Amazon is one of many companies planning to deliver packages with drones in the near future. This technology could be flying above us very soon and the online retailer now appears to be focusing on safety as well.

What do you think about Amazon’s self-dismantling drone idea? Let us know in the comments.