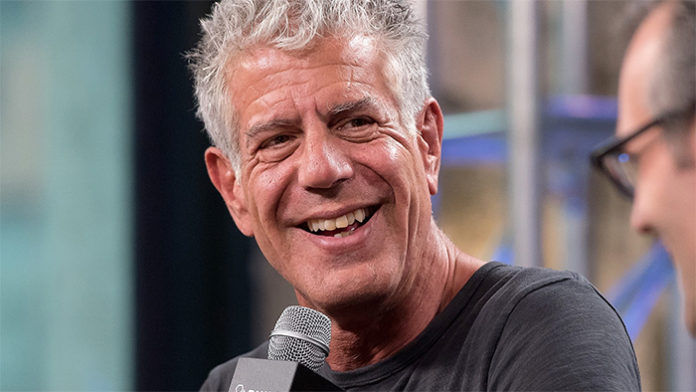 Hailing from New York City, Anthony Bourdain has been regarded as one of the most influential chefs in the world. A graduate of the Culinary Institute of America, he worked in the kitchens of numerous restaurants before rising to the position of executive chef at Brasserie Les Halles. From there, he eventually got involved with culinary writing; his first article, Don’t Eat Before Reading This was published in The New Yorker in 1997. With his credibility, it eventually led to further writing opportunities over the next few years. Since then, he has written a number of books including, Kitchen Confidential, A Cook’s Tour, The Nasty Bits, and No Reservations.

From the early 2000’s onwards, Bourdain also began to appear regularly on television. Thanks to the success of one of his books, he landed a world-travel show called, A Cook’s Tour on the Food Network in 2002. Following that, he premiered a similar series, Anthony Bourdain: No Reservations on the Travel Channel. Incredibly popular, the show went on to win three Emmy Award during its seven-year run. But that’s not all- the celebrity chef has since also starred in The Layover, The Taste, Anthony Bourdain: Parts Unknown, and The Mind of a Chef. To say that he’s active on television would be an understatement!

Speaking of TV appearances, Bourdain has also acted on a few occasions. So far, he has guest appeared in the shows, Archer, Yo Gabba Gabba!, and Sanjay and Craig. Adding to that, he has been invited as a guest onto countless talk shows over the years such as Real Time with Bill Maher, Larry King Live, Late Night with Conan O’Brien, Late Show with Dave Letterman, and The Daily Show. On film, he has also appeared in two features- back in 2008, he made a cameo in the sci-fi title, Far Cry. More recently, he also made a guest appearance in the 2015 biopic, The Big Short.

What has Bourdain been up to recently? For one thing, he has been hosting the tenth season of Parts Unknown which premiered on CNN on October 1, 2017. In addition to that, he has produced two documentary films this year- Anthony Bourdain Presents: RAD Stories, and Wasted! The Story of Food Waste. Aside from media appearances, the chef also traveled across North America for a live tour last year, which saw him entertaining crowds at over a dozen different cities. For now, it doesn’t look like he has any public events planned- but stay tuned as that may change any second!

A world-class chef, Anthony Bourdain first gained attention for his book, Kitchen Confidential: Adventures in the Culinary Underbelly in 2000. Since then, his popularity has only risen with the release of his many cooking and travel shows.

He is currently 61 years old

Anthony Bourdain was born in New York City, though he grew up in the borough of Leonia, New Jersey.

He is of French, Jewish, and Arcachon descent

His weight is unknown

His weight is unknown

Is Anthony Bourdain in a Relationship?

The celebrity chef is currently dating Italia actress Asia Argento, whom he met in an episode of his show, Parts Unknown.

Previously, Bourdain was married to Ottavia Busia; they later divorced in 2016.

Prior to that, he was married to Nancy Putkoski, whom he had been with since high school; they had been together for 20 years before divorcing in 2005.

He has a brother named Christopher Bourdain

With her ex-wife Ottavia Busia, he has a daughter named Ariana (b. 2007)

As a teen, he went to Dwight-Englewood School in Englewood, New Jersey.

Did Anthony Bourdain Go to College

After completing high school in the early 70’s, he went to Vassar College briefly before dropping out. Chasing his culinary passion, he eventually enrolled at the Culinary Institute of America, from which he graduated in 1978.

At this time, we do not have any details on Anthony Bourdain’s salary

As of 2017, Anthony Bourdain has an estimated net worth of $9 million

His favorite meals of all time include Paul Bocuse, Spaghetti Pomodoro in a cracked bowl, and Jiro

A movie enthusiast, he has many favorites including Apocalypse Now, The Wild Bunch, The Third Man, Get Carter, and Seven Samurai

Anemone by The Brian Jonestown Massacre, Pusherman by Curtis Mayfield, What’s Going on by Marvin Gaye, and Do the Strand by Roxy Music

As far as we can tell, Anthony Bourdain is not active on Youtube.