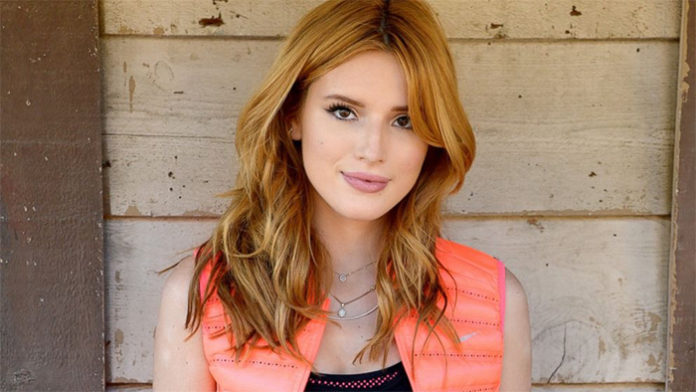 At just twenty years old, Bella Thorne has already played over 60 different roles on television and film. A former child actress, she landed her first lead role in the NBC drama, My Own Worst Enemy at the age of eleven. Following its cancellation in 2008, she joined the main cast of Little Monk, where she portrayed the part of Wendy. From there, she played a lead role in season four of the HBO series, Big Love starring Bill Paxton, Jeanne Tripplehorn, Chloe Sevign, Ginnifer Goodwin, and Douglas Smith. Ultimately, it wasn’t until later in 2010 that she received a major breakthrough on the Disney Channel.

From the fall of 2010, Thorne portrayed the lead protagonist in the Disney sitcom, Shake it Up. Created by Chris Thompson, the show starred her as CeCe Jones, an aspiring dancer who participates in a local dance show with her best friend, Rocky Blue (played by Zendaya). Not only did the actress play a main role in the series, but she also contributed to a number of songs including, Watch Me, Fashion is My Kryptonite, and Contagious Love, the first of which eventually went gold in the US. One of the greatest highlights of her career, her performance earned her a considerable amount of recognition including a Young Artist Award, and an Imagen Award.

Since then, she has appeared in several TV series including Phones and Ferb, CSI: Crime Scene Investigation, K.C. Undercover, Perfect High, and Scream. Since April 2017, she has also been starring in the Freeform drama, Famous in Love, which is based on a book of the same name. The female lead, Thorne plays the role of Paige Townsen, a young college student whose life changes for the better after landing a role in a blockbuster film. Other members of the cast include Charlie DePew, Carter Jenkins, Georgie Flores, and Niki Koss.

On film, Thorne has also appeared in countless titles. For instance, she has taken part in the features, One Wish (2010), Alexander and the Terrible, Horrible, No Good, Very Bad Day (2014), The Snow Queen 2 (2014), Shovel Buddies (2016), and Ratchet & Clank (2016). More recently, she also played Belle Walker in the movie, Amityville: The Awakening (2017) and Holly Viola in You Get Me (2017). From the looks of things, she has a few roles lined up in Midnight Sun, The Death and Life of John F. Donovan, and Assassination Nation.

Though not as active as she was before in the music scene, she has released two EPs, Made in Japan (with Zendaya), and Jersey in 2012 and 2014 respectively.

As a teen, she rose to prominence as CeCe Jones in the Disney sitcom, Shake it Up. Since then, she has starred in several other series and films.

Bella Thorne was born in Pembroke Pines, Florida, where she grew up with her siblings.

Is Bella Thorne in a Relationship?

Last summer, she had come out as being bisexual on social media. According to rumors, the actress recently got together with Youtuber Tana Mongeau.

Prior to that, she had been engaged to British actor, Gregg Sulkin; prior to tying the knot, however, they split up in 2016.

She has two sisters named Kaili and Dani Thorne.

She has a brother named Remy Thorne.

Due to issues with bullying, she completed her secondary education via homeschooling. As a student, she struggled with dyslexia for many years.

Did Bella Thorne Go to College

No, as far as we can tell Bella Thorne has not gone to college- she’s been putting everything she has into acting ever since her teens.

At this time, we do not have any details on Bella Thorne’s salary.

In her free time, she enjoys dancing and singing

Her favorite foods include spicy dishes and ravioli

Lilly Allen (she is fond of 80’s music in general)

Born on October 8th, she is a Libra.