Some people want shiny things for Christmas. Others want practical things like kitchen ware. And still others, they want a reliable internet connection that ensures that they aren’t losing their minds to a failed page load or a faster connection so they can game or watch stuff on the internet. Here, we’ll go over some awesome router deals for Black Friday 2017.
Check out some of the best deals at Amazon Below

Let’s face it, Amazon is everyone’s first thought when it comes to holiday shopping; It’s one of the few places you can shop in your post-turkey coma PJ’s and not be judged. Luckily for us, they have some great deals on routers this year. Let’s take a look.

Having reviewed this model in the past and made my comments on it while it was at full price, I can advocate for the Linksys AC1900 when on sale. Currently at $130 instead of the usual $160, this is a fantastic deal. Some of the best features of the AC1900 include speeds of up to 1,900 MB per second (when using both 5GHz and 2.4GHz bands) MIMO technology to better handle multiple users at the same time, and the handy Smart Wi-Fi App which you can use to control the settings of the router whether you’re home or across the planet.

If you’re looking for a bit of a cheaper router with still excellent performance, the Phicomm K3C May be for you. At $90 as opposed to the normal $140 price, this router can allow for 4k streaming on a 5Ghz band and a separate 2.4 GHz band for longer range and normal daily activities. This router has 6 built in High Gain Antennas, and Multi-User MIMO technology which is a great feature if you’re buying for a whole family. As an added bonus, this router has the Intel name on it, meaning the good reputation comes with this device.

Now this one is a bit of a pre-Black Friday deal by Amazon. Instead of the $100 normal price, and the $42.99 sale price, right now the price is an amazing $30. While not as powerful as previously mentioned models, the WAVLINK can only have around 1200 MB per second speed, but likewise has the 2.4 and 5GHz channels. Installation is quick, and there is a 18 month warranty in case something doesgo wrong makes this a very safe and inexpensive bet. 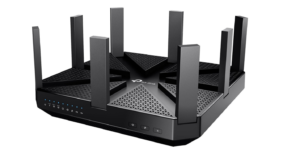 Were you looking at the above routers and going “You know, I need more speed, more power.”? If so, take a look at the TP-Link AC5400 Triband Router. Instead of having one 2.4GHz and one 5GHz channel that add up to below 2,000 MB per second, it has one 2.4GHz that runs around 1000MB per second and 2 5GHz channels that run 2167Mbps each. This means that no matter how serious of a gaming, streaming, or overall just teching family you have, this device can handle it. Other features of this device are a 1.4GHz dual core CPU and 3 co-processors, a VPN server, the ability to work with Alexa and a 2 year warranty alongside 24/7 tech help. At $200, it’s a bit on the pricey side, but considering the usual cost of around $300, it’s a steal.

Perhaps not as well known as Best Buy or Newegg, Fry’s is one of the best places to buy tech anywhere. Usually offering to pay tax on the products, this year Fry’s is even offering some free routers (technically $15, which is then returned via a prepaid $15 card but who’s counting). Here’s some of the best deals available through this store.

Another router we’ve reviewed on this site, this router is a solid performer for its price, and in actuality pretty solid for most small households. That said, when I wrote such a review, I was looking at it for its full price of around $30. Now, if I was told it’s free? Well, I’d jump right on it, as should you. Fry’s is giving these away, limit 2 per customer, with a $15 promo code and an additional $15 off due to rebate. This is one of those situations where gifting something to yourself is a great idea, and the other one you can give away, and seem like you paid a good deal more than you did.

Another great deal, this 1900 MB per second router (which can hit 600mbps on 2.4 GHz and on 5GHz run up to 1300mbps) can be yours at nearly half its regular price. With a $60 promo code, a $20 Mail in Rebate, and a solid price in the first place, you’ll end up paying $80 for a $160 device. This is a great router if there’s a gamer to buy for who has been having some lag issues, or someone who loves Netflix but doesn’t like the connection hang ups. This is another limit 2 per customer promotion, in case you want one too.

I know, the last thing you want to do during the holiday season is think about work. But if your coworkers were like mine back in the day when I worked a small, privately owned clinic, 11 out of 12 months they will be hating how slow the internet is due to how the office network is set up. So why not help everyone out with these purchases?

While not great for great offices, the Netgear AC1200 is solid for smaller offices and can greatly increase productivity and reduce headaches. At $60 (originally $90), it’s a pretty good deal, especially with its good range and ability to handle multiple connections without a great deal of lag.

The C8 is the definition of a solid router. Able to handle a good deal of range and people logging into it, the 1750mbps speed of the combined 2.4GHz and 5GHz make it a solid contender at a decent price in most scenarios. Currently, both Office Depot and OfficeMax is on sale for $75 instead of the normal $120 it usually goes for.

For Black Friday 2017, the two real winners in terms of sales are Amazon, and if a location is near you, Fry’s. Amazon has an excellent selection of mid to high end routers available at the lower scale of router prices, and can be shipped in a hurry. For Fry’s, free is a hard price to beat for a router or two, and their starter and mid level selection is a bit limited but at a great bargain. Just be sure to remember that some of the prices reflected include either mail in or instant rebates, so be sure to have some cash on you.

This has been our list of top Router sales of Black Friday 2017. Have we missed any killer deals? Be sure to let us know in the comments!