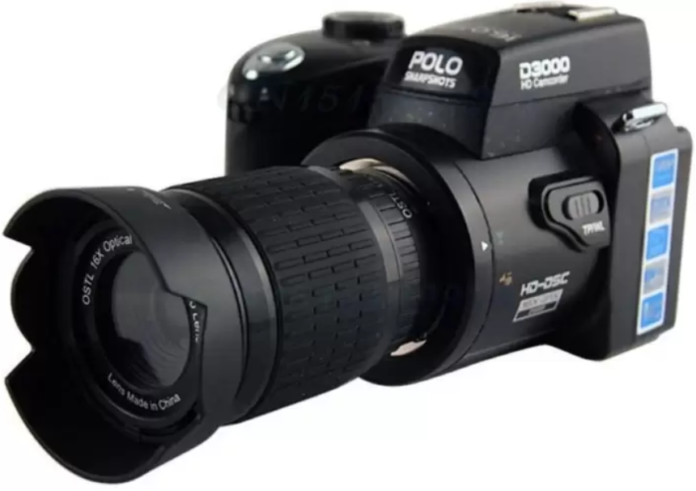 While many people focus on Black Friday as being the centre of incredible deals over the Thanksgiving weekend, often there are even better savings to be had on Cyber Monday. Cyber Monday has been a thing since around 2005, and has only gotten bigger year by year. Millions of Americans have opted to dodge the ridiculous mobs and chaos in stores around this time of year in favour of sitting in their homes on their computers, finding great deals within the calm and comfort of their own homes.


With the great deals on Cyber Monday, it’s a great time to think about picking up a big ticket item, such as a television, a laptop, or a DSLR camera. Particularly if you’re looking for a gift for someone in your life who is passionate about digital photography. For those who don’t know, DSLR camera stands for Digital single-lens reflex camera, and it refers to a digital camera that does not use film but also does not use a digital viewfinder like cheaper digital camera on the market. Currently, DSLR cameras are the most common type of interchangeable lens cameras in the world in 2018, and their popularity will surely only grow as photography moves more and more from film to digital.

Picking a DSLR can be tricky if you don’t know exactly what you’re looking for. Even more so than with other electronics, there is a serious emphasis placed on which brand you pick, as certain cameras are only compatible with certain lenses. However, with the incredible range of great Cyber Monday sales online in 2017, you’re sure to find a better deal on DSLR cameras than you could get at any other time of year. 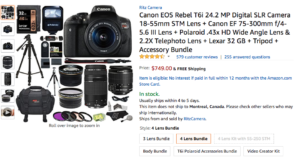 Most of the deals on this list represent opportunities to get just a camera, sometimes with some other accessories like a lens or an SD card, but this deal on Amazon is a chance for you to pick up a full range of gear that you’ll need to start creating professional quality photographs. This bundle comes with more stuff than this list even really has room to discuss, but take a look for yourself and you’ll see that included are things like a tripod, a card reader, a cleaning kid, multiple lenses, and much more. This bundle is fairly expensive and may be out of the price range of some when it comes to gifts, but if you can afford it, it would be a great way to get someone you know on a fast-track to photography skills. There is a similar bundle to this one on Best Buy right now that is being marketed as the best camera bundle for Cyber Monday, but if you compare them side-by-side, you’ll see that this Amazon bundle is actually the better deal. To take advantage of the discounted price and all available coupons click here. 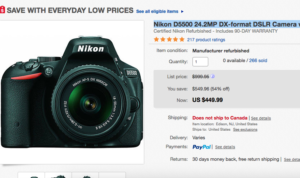 If you’re looking for a mid-range DSLR that will do the trick when it comes to beautiful professional-looking photos as well as HD filming and more, you’d be hard pressed to do better than this Nikon D5500. For Cyber Monday, it’s on sale for only $449.99 from an original list price of one thousand dollars, which represents savings of more than fifty percent. This camera won’t cut it if you’re a professional photographer or looking to film professional-quality video, but for everyone else it will certainly do the trick. What’s more is that it comes with a lens and a memory card, so you’ve got everything you need to get shooting right away.

Usually on Cyber Monday, the best deals are on places like eBay, Amazon, Adorama, and not on the retailers’ websites, as they do not have as much flexibility to offer you the best deals possible. However, in this case, that rule is proven wrong. On Canon’s website, they’re offering the EOS Rebel T6 for only $249.99, which is about as cheap as it has ever been possible to get a quality DSLR. This is an entry-level DSLR, and it’s perfect as a gift for someone who is just getting into high-quality photography. What’s more is that if you buy this camera, they will throw in online photography classes for half price so you can really figure out how to master your new device. This camera usually retails for six hundred dollars, so you’re getting some truly remarkable savings of $350, which is well over fifty percent off. If you’re looking for an entry-level DSLR this Cyber Monday, you’d be hard pressed to find a better deal than this.

This may be the highest quality camera on this list so far, and it also has the biggest savings in terms of sheer numbers, as the list price for the camera bundle is $1546.95, and the camera is on sale for only $996.95, which is a savings of over five hundred dollars! This bundle also includes a memory card and a free copy of Photoshop, so you’ll be able to edit your photos to perfection as well. It is also tax free outside of New York and New Jersey, although you will have to pay for shipping. The Nikon D7200 is a truly quality and versatile camera, as it thrives in a number of situations and shoots really high-quality video as well. It has a number of built-in high-end features, including a colour metering system and picture control profiles. It can shoot 1080p video in 60 frames per second, and it has an input for an external microphone so that sky is the limit when it comes to audio recording quality, and you won’t have to lug around an audio adapter in order to connect your own microphone to it.

Like the previous camera on this list, here’s another great deal from B&H Photo Video. I hadn’t heard of this site before this Cyber Monday, but they are truly getting it done with the deals this year, and they’ll surely be a site to look out for in the future. In this case, they provide another option for a great place to pick up a bundle including a Canon EOS Rebel, as they’ve put together a combination of two lenses, as well as a SD card, a cleaning kit, and a copy of Photoshop for the super low price of $449.00. This represents a savings of $300 off of an original list price of $750, which is a great bargain. As alluded to earlier, the Canon EOS Rebel T6 is an affordable but versatile camera that works well in all sorts of challenging situations, including in low light or when things are shaky. With B&H not charging any sales tax on this combo, you’ll be getting a great camera with two lenses and more for under $500, which is about as well as you can hope to do on a DSLR sale for Cyber Monday 2017.


When it comes to buying a DSLR camera online, there is only so much research you can do, as another important consideration is feel. How does a camera’s size and weight feel in your hands? How does the responsiveness of the buttons feel on your fingers, and how does the camera fit in your bag size-wise. These kinds of considerations don’t really apply if you’re buying something like a television, which will just hang there on the wall and not be interacted with as much physically. As such, when buying a DSLR online, it can be smart to pick one with a good return policy so that you can send it back if it just doesn’t feel right to you. Hopefully, this list has provided a handy resource to those who want to get their hands on a new camera for Cyber Monday 2017 but aren’t sure where to start. With savings of over 50% off on many of these cameras, and some great bundles where you can get everything that you need with one easy purchase, it seems as though 2017 is an unusually good year to pick up a new DSLR camera on Cyber Monday. Happy shopping everyone!