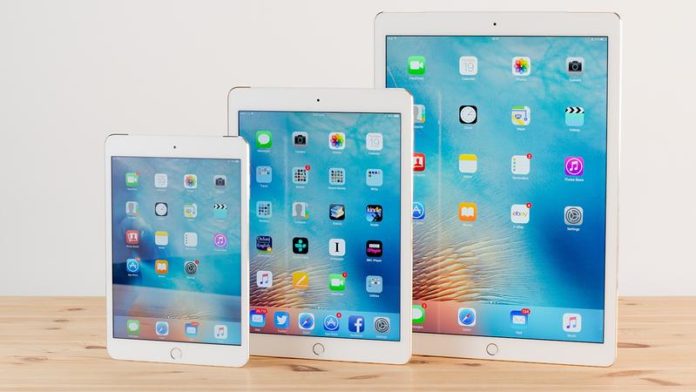 Now that the madness of Black Friday is over and everyone has finished eating their Thanksgiving turkeys and arguing with their rarely seen relatives about politics, it is time to look ahead to the next major shopping holiday which, thankfully, is online-based, so you don’t need to stand in lines or brave the rabid crowds in retail shops any longer. Cyber Monday 2017 is just around the corner, so if you haven’t already, it’s a good time to get prepared for the deals so that you won’t be caught off guard amidst the swarm of savings. With a shopping event like Cyber Monday, it can be hard to distinguish between legitimate great deals and deals that have catches or are otherwise better than they seem, so it’s good to have a strategy sorted out in advance: to know what you’re looking for and where you plan to find it.

It is always tricky trying to find a good deal on Apple products because they traditionally don’t really go along with the marketing tactic of offering old or otherwise outdated products at discounted rates. They replace their electronics with slightly better versions at a slightly higher price, and so there often isn’t a way to find a good deal. However, if you know where to look, there are plenty of places to find iPads at discount prices this Cyber Monday. The Apple iPad has been around since 2010, and it doesn’t get nearly as much attention as it did when it first launch, since the tablet market has arguably been saturated since then. However, it’s a remarkably solid and aesthetically pleasing tablet, and stands its ground against any other tablet on the market even now. So here’s a list to help you find the absolute best deals on iPads this Cyber Monday! 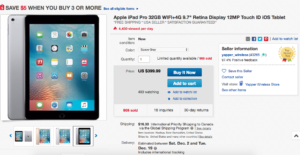 Given that Apple’s official price for this iPad is around a hundred dollars higher, this is a great way for you to get a brand new iPad for well under the list price this Cyber Monday. Many people are wary about buying electronics new on eBay, worrying that they may be scammed by buyers or that they won’t receive the same warranty or support that they would if they bought it from an official retailer. I had a friend once who thought he was buying a very cheap Xbox on eBay and it turned out that he was mailed a piece of paper with an Xbox printed on it, which is what the product description had actually been. However, the eBay seller of this iPad has a rating in the high nineties, and has sold nearly a thousand of this same model, meaning that you can be almost a hundred percent sure that you’ll get exactly what you’re looking for in this case. The seller also offers free shipping, and if you buy three or more iPads from this seller, you’ll get an extra $5 in savings, which admittedly isn’t a whole lot, but it’s great if you need to buy iPads for your business or something. 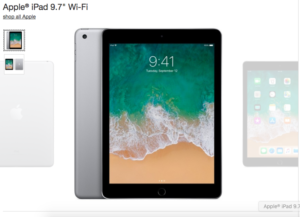 Though most people don’t think of big box retailers like Walmart and Target when they are considering the best place to find the best deals on top end electronics, it is worth checking out their websites for online deals. In this case, Target is offering one of the best deals on a 9.7 inch iPad this Cyber Monday, offering them for well under even the price of competitive eBay sellers.

If you’ve been following our other Black Friday and Cyber Monday feature articles over the past week, you’ll know that, this year, a store called B & H Audio Video has been offering some of the absolute lowest prices on a whole range of items. B & H is based in New York, and is the largest non-chain electronics store in the city. They’re offering an instant savings of $150 on this iPad, which is Apple’s largest and most fully-stocked with features, featuring a hard drive that is larger than the one on the MacBook I’m writing this article on. Also, they are selling these iPads tax free, if you live outside of New York or New Jersey, which means that you’ll be saving hundreds more that you would have paid in tax on this iPad.

If you were interested in that last deal from B & H Audio Video but you’re hoping to spend a few hundred dollars less on a smaller iPad with a smaller hard drive, then this is your deal here, as they are also selling the lesser model of their newest iPad on sale, this time for $100 off. Like the more expensive model, this iPad has a lightening fast new processor, and a beautiful Retina display. Like the other model, it also comes tax free, too. 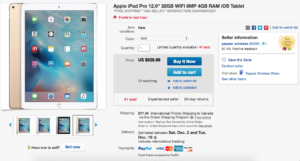 This Cyber Monday, many of the best deals on Apple iPads are actually on eBay, and so your best bet may be to browse around there until you find a great price from a reputable seller. In the case of the iPad here, you can get savings of around 30% off of the list price on a 12.9 inch iPad pro with a 32 gig hard drive, which is a hard deal to beat.

As you will have noticed from reading this list of some of the best iPad deals on Cyber Monday, we do not really see the same kinds of savings of 50% or 60% or more in iPads that we do on other electronics like televisions, printers, and non-Apple tablets and computers this Cyber Monday. This is for a number of reasons. For starters, usually Amazon is one of the best places to find Cyber Monday sales. However, in the case of Apple, they have an official account with Amazon, which means that the prices there are no better than the ones that they offer on their own website. Another reason that it is tough to find great prices on iPads specifically is that there is such a large market of other tablets that they know that they are appealing directly to people who are already interested in the features of iPads compared to other models of tablets, meaning that they do not need to lower prices to appeal to these buyers, who are loyal to Apple regardless of price.

Nevertheless, we hope that this list has been helpful in your search for discount iPads for Cyber Monday 2017, with many of these listings offering savings of hundreds of dollars off of the original list prices for iPads. The iPad continues to be a reliable, innovative tablet that many people find desirable because it allows for the usage of Apple’s many great apps and features. There are some great games that are exclusive to IOS that are a whole lot of fun to play with the iPad’s large screen and crystal-clear display, and many artists and musicians get a lot of use out of Apple-only software on their iPads, such as the music recording app Garageband. For example, the recently-deceased Canadian music legend Leonard Cohen recorded his last album on Garageband on his iPad, and so have artists like Bjork and Gorillaz. If you’d like to join their ranks and create something special on an iPad, you now have a list of some of the best places to pick one up at an unusually low price for Cyber Monday 2017. Happy shopping, everyone.