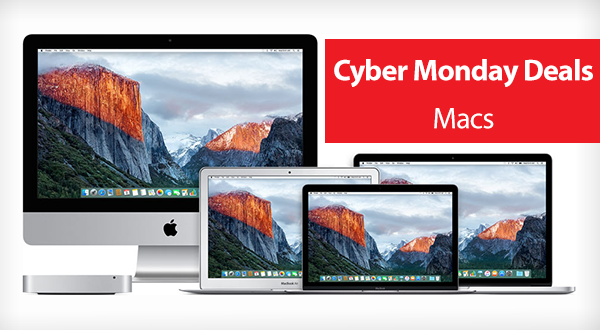 As many people have figured out by now, Cyber Monday is one of the absolute best opportunities of the year to find a great sale online on whatever items it is you’re looking for in 2017. Many Americans have decided that is just isn’t worth it to stand in long lines and literally fight with people to get good deals in retail stores over the Thanksgiving weekend on Black Friday, and so they stay home and navigate the best deals online.
Check out some of the best deals at Amazon Below

However, if you’ve ever tried to get a good deal on a MacBook before, or an Apple product in general, you know it’s tough going. Apple’s whole marketing scheme is based on providing high-quality, beautiful products at fairly high prices, and they don’t really do sales or price reductions over time. Once an Apple product is obsolete, they replace it with a new, slightly more expensive version of the same thing. As such, it may seem counter-intuitive to be looking for deals on MacBooks on Cyber Monday, which is a day that’s all about the best deals. At the same time, if you know where to look, there are legitimate deals to be found on MacBooks at various online retailers. Without further ado, here are some of the best deals on MacBooks for Cyber Monday 2017.


As far as I’m concerned, eBay is probably the best place to buy a MacBook on Cyber Monday, so long as you don’t mind getting a used one. The thing to make sure of is that the laptop still has its warranty intact so that if the condition is worse than listed or if something goes wrong, you can still get it fixed free of charge. That’s the case with this MacBook, which is this year’s model and looks to be in great shape and is going for way under the list price. Some people prefer to get a laptop brand new, but if you’re willing to get a slightly used model, you can save hundreds of dollars without a noticeable drop in quality. Th

The above MacBook was an example of a nearly brand new and nearly pristine MacBook that is hundreds of dollars under the list price for such an item simply because it’s slightly used. However, if you’re willing to go a little bit further into the used territory and get something slightly scuffed or dinged, you can find some absolutely crazy Cyber Monday deals. For example, this MacBook pro, which is going for $499.99, which is half of the list price and includes free returns for thirty days. The buyer has sold around 50 of these laptops, and they have perfect customer satisfaction, so there isn’t a whole lot to worry about. Usually when someone thinks about getting a MacBook, they’ll plan on dropping anywhere between $1200 and $2000. With this Cyber Monday eBay sale, you’ll be spending less than half of that amount and you’ll have a new-to-you laptop for around $500, which is a remarkable deal, if you’re willing to put up with a product that isn’t from eBay and isn’t pristine.

This list wouldn’t be all that useful if it only included slightly used MacBook sales for Cyber Monday 2017, because many people are only interested in a brand new laptop, and others are buying the laptops as gifts for others, and so a used version simply would not do. In that case, here’s an example of a remarkable deal on a top of the line MacBook pro from last year, which includes the Touch Bar feature. I had not heard of the website B & H Photo Video before this year’s Cyber Monday sales, but I’m going to be keeping an eye on them going forward, because they have sales on in-demand products that amount of hundreds of dollars in savings. In this case, we’re talking about a MacBook that has a list price of of $2399, which means that you’re getting instant savings of $800, and to top it off, this website doesn’t charge tax if you live outside of New York and New Jersey, so what you see is what you pay. This MacBook is thinner and lighter than previous models, and it has a larger and more responsive trackpad. The main draw may be the Touch Bar, which many users find very useful for navigating apps quickly and easily.

If you’re looking for the very low prices and ease of purchase that eBay provides without ending up with a second-hand or otherwise sketchy product, there’s a compromise to be made of course. eBay sellers like “6ave” sell brand-new, in-box MacBooks at far lower prices than on the official Apple website. In this case, you can save over $200 on the cost of a 13.3 inch MacBook Pro from this year in Space Gray, with the full warranty intact and thirty day returns. This seller has sold nearly 600 of these MacBooks and has a very high customer satisfaction rating, so you can expect not to be disappointed while saving hundreds on your new MacBook this Cyber Monday. Also, if you’re buying a MacBook on eBay, you can usually find a payment plan so that you can make small monthly payments and not break the bank upon purchase, which is a great option for some.

While many Cyber Monday shoppers are simply looking for the best possible deal, others are looking for an opportunity to pick up top of the line electronics at a better price than usual. The latter group of shoppers will be pleased to see this deal at Adorama, in which you can get a top of the line MacBook Pro, fully loaded with all of their top features and a Touch Bar for $1899.00. While that obviously is still a lot of money for a laptop, it is a savings of $1000 from the usual list price of $2899.00, making it the biggest saving opportunity on this list in terms of sheer numbers. This 15.4 inch MacBook Pro is their thinnest, lightest, and most powerful model yet, and so if you need a powerful MacBook to do work on as an editor, producer, or designer, this is your best bet and a great opportunity to save a thousand dollars.

It’s inarguable that Apple have a pretty good racket going when it comes to their laptops. If you take a look at their official website, you’ll notice stunning design and art, with a notable absence of prices or sales. What they have done is created a situation in which price is an afterthought. They’ve created beautiful laptops that serve as a kind of status symbol, knowing that if they can convince customers of the cool factor of their laptops, customers will be willing to spend any amount of money on getting a new MacBook Pro.


Some customers buy into this, which is fair. Apple has a remarkably high marketing budget, and it is hard not to get swept up by the push to buy the latest MacBook from Apple’s website, or from an Apple Store. However, if you slow down and take a look around, there are all sorts of websites that are selling the same product at dramatically lower prices. For example, by shopping at Adorama, you could nearly buy two MacBooks this Cyber Monday for the price of one on the Apple website. There is no doubt that Cyber Monday can be a time of overwhelming, thoughtless consumerism. However, using this list and other resources, you can come out a winner on Cyber Monday 2017, saving hundreds or even thousands on a new MacBook that you’ll enjoy using for years to come. Happy shopping!