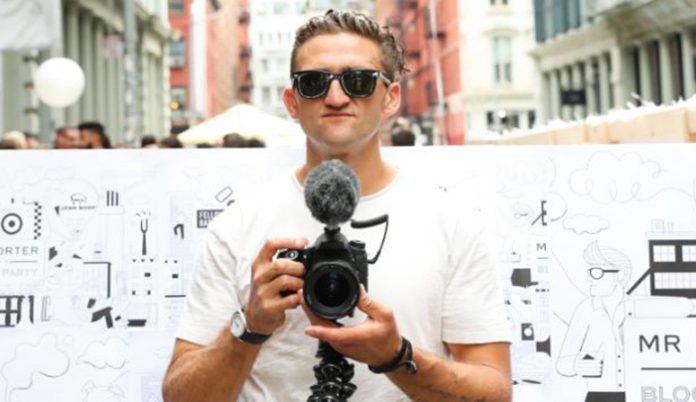 An established Youtube personality, Casey Neistat has been active on the Internet since the early 2000’s. Currently based in New York City, he first gained exposure after creating a three-minute film called, iPod’s Dirty Secret in 2003. From there, he teamed up with his brother to create a series of films titled, Science Experiments, each of which- as its name implies, documents a different science experiment. A few years later in 2008, it was announced that he would be starring in his own HBO series, The Neistat Brothers; it later premiered on June 4, 2010.

Since then, Neistat has appeared on television a couple of times on The Light Bulb Conspiracy (2010), Fox and Friends (2013). Though not his main focus, he has also acted on a few occasions- for instance, he made his official acting debut as a Cat Burglar in the 2009 film, Daddy Longlegs. From there, he made a cameo in the crime movie, Nerve starring Emma Roberts, Emily Meade, and Dave Franco. According to IMDb, he will be making an appearance in the upcoming feature, Airplane Mode, a film that will star many internet celebrities including Logan Paul, Nick Swardson, Andrew Bachelor, and Chloe Bridges, among others.

Of course, there’s also his Youtube channel. Launched in early 2010, he has uploaded well over 800 videos over the past seven years. Some of his earlier videos include Emergency Brake, My Old Car, The Ethics of Stealing a Bike, and Chat Roulette. Despite never having received formal training in film-making, Neistat has garnered himself an impressive audience on the site- over 8.1 million subscribers to be exact. As of 2017, he mostly posts vlogs to his account, with the occasional product review video. For his contributions to Youtube, Neistat received a Shorty Award for Youtuber of the Year and a GQ Men of the Year Award for New Media Star in 2016.

What other projects does he have going on? Aside from his video-making career, he also launched his own video-sharing app called, Beme, in the summer of 2015. Described as being “deceptively simple”, the app had eventually shared over a million videos within eight days of its release. A year later, Beme was acquired by CNN for an alleged $25 million. On top of that, Neistat also spends some of his time as a public speaker. Over the past few years, he has spoken at a number of venues from The Museum of Modern Art in New York City to The Nantucket Project.

Casey Neistat initially rose to fame after creating a three-minute documentary film titled, iPod’s Dirty Secret in 2003. Since then, he has continued with a successful online career on Youtube.

Casey Neistat was born in Gales Ferry, Connecticut, where he spent the majority of his childhood. Following the birth of his son in 1998, he relocated to New York City.

Is Casey Neistat in a Relationship?

Casey Neistat has been married to his wife, Candice since 2013. In 2005, the two had eloped in Houston, Texas, where they later got married- as it happened, however, their marriage was annulled just a month later. From there, it wasn’t until 2013 that they got engaged again, after which they got married for the second time.

As a teen, he dated a woman by the name of Robin Harris.

He has a sister named Jordan Neistat

He has two brothers named Van and Dean Neistat

Casey Neistat has two children- at the age of seventeen, he had a son named Owen with his then-partner, Robin Harris. With his current wife, Casey, he also has a daughter named Francine.

As a student, Casey Neistat went to a local high school in Gales Ferry, Connecticut, though he ultimately dropped out at the age of fifteen.

Did Casey Neistat Go to College

No, ever since he dropped out of high school, he hasn’t returned for more schooling.

At this time, we do not have any details on Casey Neistat’s salary.

In his spare time, he enjoys creating videos

He enjoys the works of Wes Anderson, Stanley Kubrick, and Quentin Tarantino