China: Two Boys Cling To The Bottom of a Bus To Reach Parents 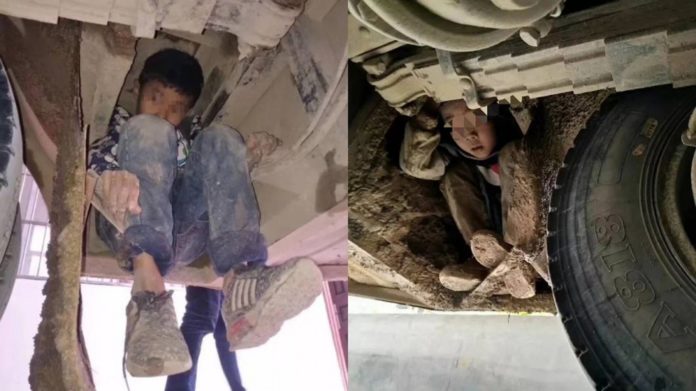 Two Chinese boys that attempted a very dangerous journey to reach their parents have made news all over the country. The pictures of the two boys hiding under the bus have sparked an outcry on social media.

The boys were reported missing by their teacher on November 23. Authorities found them later that day under a bus at a bus station.

Authorities and local media have not revealed the names of the two boys but reports say they are from Guangxi, a region in southern China that borders Vietnam. The boys were trying to get to Guangdong province, where their parents work. The distance from Guangxi to Guangdong is about 385 miles.

The Southern Morning Post reported that the boys are around eight or nine years old. The boys were found by a security team when the bus made a stop at a bus station. Pictures show the boys clinging to the bus while covered in dirt.

The boys didn’t go very far but staff were surprised to see that they were uninjured throughout the journey, which reportedly took them through steep slopes. Staff members spoke to the Southern Morning Post and said that the boys didn’t want to talk when they were questioned. One staff member later said they found out the boys missed their parents and wanted to see them. The Southern Morning Post was also told by one of the workers that the children’s bodies were really thin, so the undercarriage was a good hiding spot.

Local media reported that the boys were picked up by relatives, who were contacted after they were found. The boys, who had been reported missing four days ago, did not suffer any injuries during the journey.

Pictures have sparked an outcry on social media site Weibo. In China, many children are left behind by parents, who move to other areas to find work. A lot of the children are left with their grandparents or other family members but there have been cases where they are left alone.

The two boys were picked up by relatives the same day they were found. The brothers reportedly escaped from their school before going on the journey. They had been told by relatives that their parents were working in Baise City to make them feel closer but they are actually working in Guangdong. The bus they were found in was heading to Baise City.