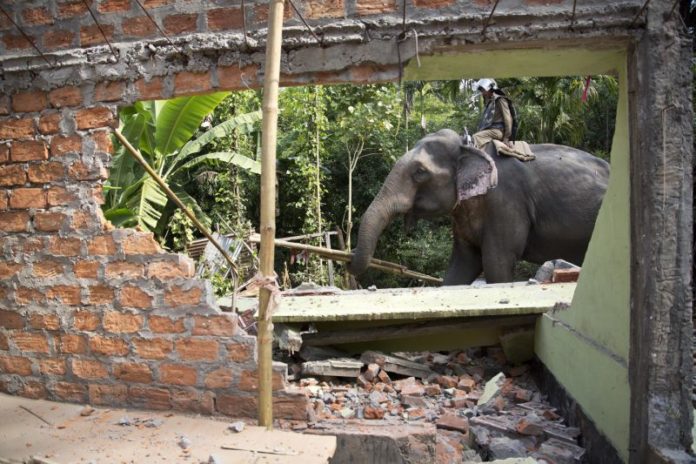 Indian police have decided to use elephants to demolish huts built in a protected forest area. The decision to demolish the huts caused anger among the people living in the area.

People threw rocks at police, who were sent in to watch the demolitions and prevent the situation from getting out of control. Some bulldozers were also brought in to help with the demolitions.

Authorities say people have been living illegally in the protected forest area. A police commissioner said five protesters were injured in a fight after police used teargas to disperse the crowd.

The demolitions could take some time as there are close to 1,000 huts in the area. Most of the huts are made from tin or bamboo. Assam Forest Minister Pramila Brahma said the area is an elephant habitat. She explained that the people living illegally in the area are forcing the animals to leave and look for food in other places. In recent years, India has done similar demolitions in other protected areas.

The demolitions come after a court order, which asked for the huts to be removed from the protected forest area by Thursday. The arrival of police, elephants and bulldozers quickly caused anger among the people as they say they aren’t living there illegally.

Residents argued that they bought their land before they were informed that it was part of the protected forest area. The construction of huts appears to be a major problem for the area. Three years ago, a survey by the state found that about 6,000 people had built homes inside the protected area. The state is not only worried that this will destroy elephant habitat but also that it will lead to more incidents between humans and elephants. Residents say they should receive new homes before the demolitions happen.

With the population growing, more and more people are now entering their habitat. Recent government figures revealed that elephants and tigers are killing one person a day in India. There are more than 27,000 elephants in India.

The idea to use elephants for demolitions has been criticized by some environmentalists. They say this could cause injuries to the animals. In 2013, they were criticized for using elephants in the same area to demolish huts in a forest. In January 2016, the National Green Tribunal ordered the demolition of shops in Assam’s Kaziranga National Park.

Feb 11, 2020
The NFL Free Agency period is coming up and there are big names that will attract lots of attention from teams around the league....