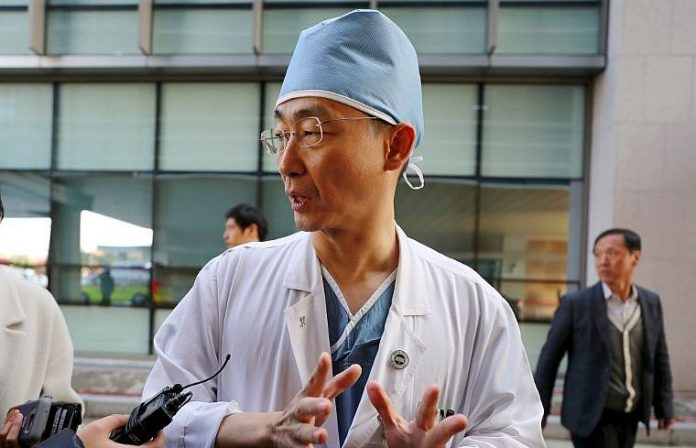 A North Korean soldier who was seriously injured after he was shot at least five times during his escape has woken up.

The soldier was taken to the hospital earlier this month after crossing through the Demilitarized Zone. The North Korea defector attempted to escape with a vehicle but a wheel came loose and he had to finish the journey on foot. He was shot at more than 40 times by North Korean soldiers and was hit at least five times.

South Korea said a few days later that he crossed to the South Korean side of the Joint Security Area (JSA) and was found under leaves.

It was later reported that he was in critical condition after being shot at least five times. Last week, several news sites reported that surgeons treating his wounds removed dozens of parasites from his body. The soldier had been unconscious and relying on a breathing machine since arriving to the hospital. Initial reports said he had been hit in the arm and shoulder by gunfire.

The Yonhap news agency reports that the soldier asked to watch television. A government official told the news agency that they believe the most life threatening has now passed.

The North Korea defector is one of the few to ever cross the Demilitarized Zone. The area is one of the most guarded places around the world and reports say only three soldiers have tried to escape through this route. The previous two escapes happened in 2007 and 1998, according to South Korea’s military. Those two escapes did not involve any gunfire.

Estimates say about 1,000 people from North Korea flee to South Korea each year. But the majority don’t try to escape through the DMZ, which is heavily guarded. Most of the people instead flee via China, which has a less guarded border.