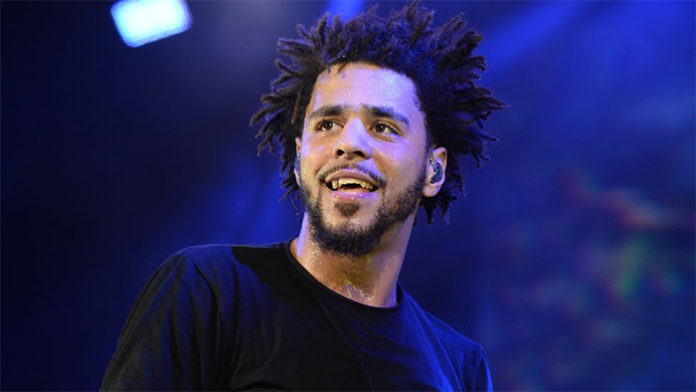 A music producer and rapper, J. Cole first made himself known in the rap scene in the late 2000’s. After honing his skills as a teen, he dropped his debut mixtape, The Come Up in 2007. Over the next couple of years, he released two additional titles, The Warm Up, and Friday Night Lights. Then in 2011, he came out with his debut album, Cole World: The Sideline Story. Highly anticipated by fans, it produced three hit singles, Work Out, Nobody’s Perfect, and Can’t Get Enough. A chart topper in the US, over one million copies have since been sold across the country.

His second album, Born Sinner was released in June 2013. A follow up to his debut, it included many collaborations with Bas, Amber Coffman, Miguel, Kendrick Lamar, 50 Cent, and Bas, among others. Met with praise, the record gave rise to the popular tracks, She Knows, Crooked Smile, Power Trip, and Forbidden Fruit. His second number one hit in the US, the album also charted in the UK, New Zealand, and Switzerland. In support of the release, Cole embarked on a What Dreams May Come Tour with fellow artist, Wale.

A year later, he dropped his third album, 2014 Forest Hills Drive. Produced mainly by Cole himself, it came with thirteen tracks, four of which went on to become singles- Apparently, No Role Modelz, Love Yourz, and Wet Dreamz. Lauded by critics, the record earned him a Grammy Award nomination for Best Rap Album in 2016. As with his earlier release, it had reached the top of both the Billboard 200 and the Top R&B Albums charts in the United States. Within two years, it had sold over two million copies, earning it double platinum accreditation from the RIAA. To date, 2014 Forest Hills Drive remains to be his most successful album.

Since then, the rapper has come out with a fourth album dubbed, 4 Your Eyez Only. Another platinum hit, it led to the release of the charting single, Deja Vu. To promote the record, he embarked on a multi-leg tour which began on June 1, 2017. Assuming all goes according to plan, it will come to an end on December 9, 2017, in Australia. What else has Cole been up to lately? Well, for one thing, he has helped to produce songs for J.I.D., Logic, and Childish Major this year- said titles include, D/vision (feat. EarthGang), LAUDER, AfricAryaN, and Supply Luh.

This March, a documentary directed by the rapper himself titled, J. Cole: 4 Your Eyes Only also premiered on HBO- it has since been made available for streaming on Youtube.

J. Cole first garnered recognition for his debut mixtape, The Come Up in 2007. From there, his popularity has only continued to soar with his subsequent releases.

J. Cole was born in Frankfurt, West Germany. After his family left the family, he moved with his mother and brother to Fayetteville, North Carolina, where he was raised.

Is J. Cole in a Relationship?

J. Cole has been married to Melissa HeHolt, the Executive Director of the Dreamville Foundation, since January 2016.

At this time, we do not have any information on J. Cole’s previous relationships.

Unknown- he had abandoned the family when he was young

J. Cole does not have any sisters.

He has a brother named Zach Cole, whom he grew up with in Fayetteville, North Carolina.

J. Cole has a daughter with his wife Melissa Heholt, who was born in 2016. Known for keeping his private life under wraps, it wasn’t until earlier this year that it was revealed he had a child.

He went to a local high school in North Carolina, from which he graduated from with a 4.2 GPA.

Did J. Cole Go to College

Upon completing high school, he moved to New York City where he went to St. John’s University on a scholarship. Initially a computer science student, he later switched to business and communications; he attained his bachelor’s degree in 2007 with a 3.8 GPA.

At this time, we do not have any details on J. Cole’s salary.

Even in his downtime, J. Cole likes making new beats- that and spending time with his family

Lobster Mac and Cheese and Catch in New York

His favorite rappers include Eminem, Tupac Shakur, Has, The Notorious B.I.G., and Jay Z

Born on January 28, he is an Aquarius